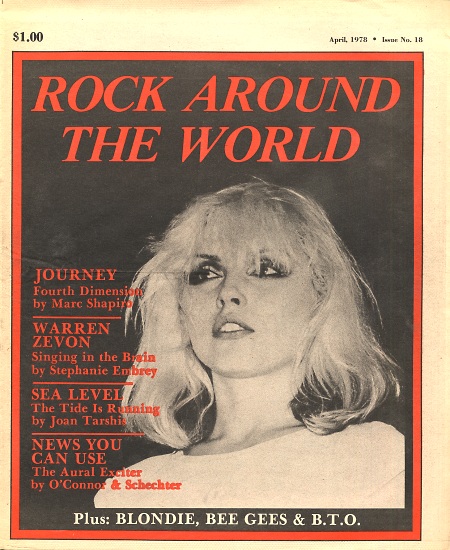 “Our music is kind of a cross between power pop and hard rock. We do a lot of different kinds of music so it’s hard to put a label on exactly what it is we do. What would you call it?” – Debbie Harry of Blondie

New wave! New wave! All hail the new wave! Its very name is a rallying cry for rock fans everywhere to tear off the shackles of bloated heavyweight cantatas and lighter than air Framptonisms. It’s a return to the basics – it’s the harbringer of things to come. And what say you, Friend Shapiro, of this rising up of the rock masses?
Friend Shapiro says “New wave? A resounding cow puckey on it all.”
But not a blanket cow puckey mind you. Some of the media blitz does hold water. There are a handful of musicians who have used their abilities at recycling Chuck Berry licks to entertaining advantage. But, on a whole, new wave has been nothing more than a sounding board for poor musicianship, insincere political stands and the marketing of Gucci safety pins. 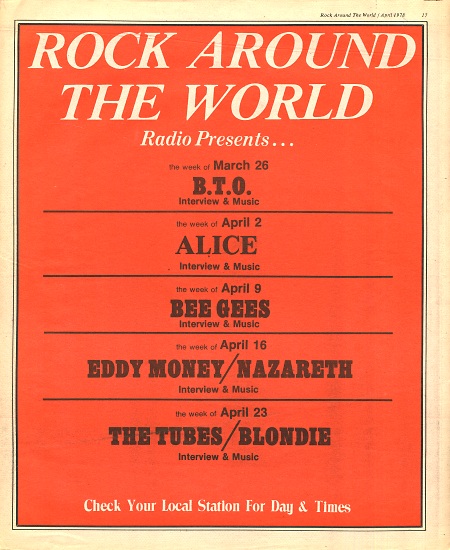 And to top it off, ‘New Wave’ is a misnomer to boot. The term new wave indicates something lyrically and instrumentally new rising phoenix-like out of the ashes of the old. A rock and roll mystery tour with a bit of the avant-garde thrown in for good measure. Now if you follow that line of thinking, you would be safe, on an historical level if nothing else, in stating that new wave began and died with Patti Smith’s Horses LP.
Horses, like no other LP since, took rock and roll kicking and screaming into a lyrical malstrom where artistic and creative thought were a hit and run constant. It was scary the way pure intellect and the primitive rock and roll beat could spawn what was literally a new music.
So complete was the album that Patti herself has had trouble duplicating its excellence. A cry rang out amidst the sludge that followed. “Was legitimate new wave to be a one hit wonder, destined to languish forever in the realm of what might have been?” It sure seemed that way until one day:
September 1976: It came on the radio late in the afternoon and from the opening blast of Farfisa organ it was like magic. Those searing guitar lines! The surreal word pictures falling from the mouth of this sultry queen bitch! It was a magic carpet ride on the back of a song called “Sex Offender” and it was a rock and roll shot in the arm from a group called Blondie.
“One of the first groups I was with was called Stiletto,” she said. “We were probably the first punk rock group. We’d get on stage in real trashy clothes and act real sleazy. It was great fun.
“Blondie came together after a whole lot of experimentation with other groups. After Stiletto, Chris (Stein) and I formed a couple of groups but it was real hard to keep anything together for any length of time. Those early groups were pretty much into a cabaret trip. After a while I got a bit tired of that and dropped the band idea in favor of a solo thing.
“But after a couple of years of that I realized that I’ve always been more comfortable and more able to do my own thing in a band situation. That’s when I got back together with Chris and some other musicians and formed Blondie.
“I’ve always wanted to be myself, to dance around and get really crazy. And with Blondie I can do that.”
Further investigation showed that Blondie was not out of the same illiterate mold that most punk acts were hanging their performing persona on. The members of Blondie could obviously read. They could play their instruments with better than average proficiency. And they were the first New York band in many a moon to flat out admit that they subsisted on something besides Big Macs and Drano.
But beyond all that, Blondie had a wildly creative imagination and they were putting it to good use. The worn-out odes to sex, dope and rock and roll became, in Blondie’s hands, lyrical pop-art experiments that alternated tongue in cheek and mystical shots to a wall-of-sound sixties beat that had some dude named Spector yelling foul.
Critical praises for the group’s non-label single soon escalated Blondie to the subject of a rather competitive record company bidding war. The brass ring went to Private Stock who whirlwinded the band through recording sessions for their debut LP, titled for lack of something better Blondie.
As might be expected Blondie came out to a flurry of positive reviews and a fair share of progressive radio airplay. But, in terms of that all important commercial acceptance, Blondie was hoisted by its own imaginative petard. For this was the summer of lifeless ‘n’ roll and not even the mainstream vocals of Debbie Harry was going to breach a Frampton/Bay City Rollers soaked playlist with the likes of “Rip Her To Shreds” and “Kung Fu Girls.” This AM drought resulted in fair to middlin’ sales but no cigar.
“Producing something commercial is probably one of the easiest things to do. Producing something that’s 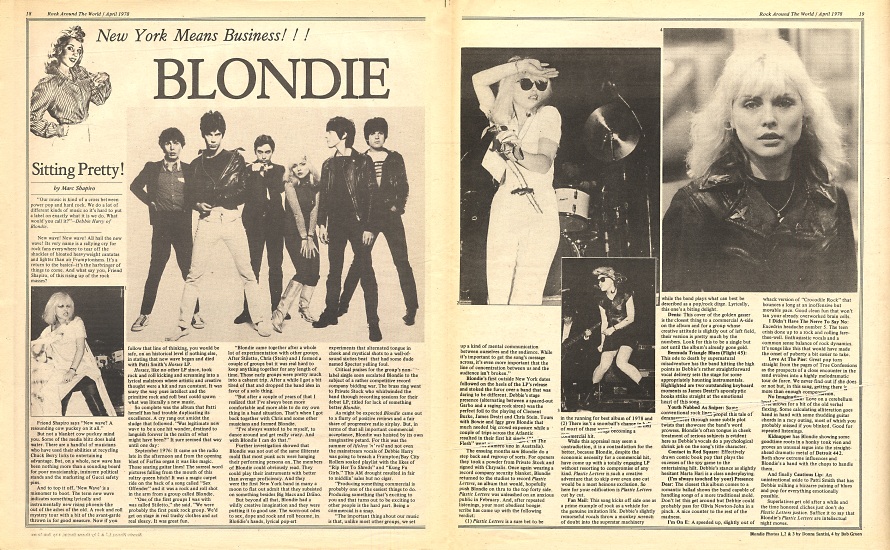 exciting to you and that turns out to be exciting to other people is the hard part. Being a commercial is a snap.
“The important thing about our music is that, unlike most other groups, we set up a kind of mental communication between ourselves and the audience. While it’s important to get the song’s message across, it’s even more important that the line of concentration between us and the audience isn’t broken.”
Blondie’s first outside New York dates followed on the heels of the LP’s release and stoked the furor over a band that was daring to be different. Debbie’s stage presence (alternating between spaced-out Garbo and a raging rock siren) was the perfect foil to the playing Clement Burke, James Destri and Chris Stein. Tours with Bowie and Iggy gave Blondie that much needed big crowd exposure while a couple of trips across the Atlantic resulted in their first hit single (“In The Flesh” went numero uno in Australia).
The ensuing months saw Blondie do a step back and regroup of sorts. For openers they took a powder from Private Stock and signed with Chrysalis. Once again wearing a record company security blanket, Blondie returned to the studios to record Plastic Letters, an album that would, hopefully push Blondie thru to the top forty side. Plastic Letters was unleashed on an anxious public in February. And, after repeated listenings, your most obedient boogie scribe has come up with the following verdict:
(1) Plastic Letters is a sure bet to be in the running for best album of 1978 and (2) There isn’t a snowball’s chance in hell of most of these songs becoming a commercial hit.
While this appraisal may seem a contradiction, it is a contradiction for the better, because Blondie, despite the economic necessity for a commercial hit, have come up with a totally engaging LP without resorting to compromise of any kind. Plastic Letters is such a creative adventure that to skip over even one cut would be a most heinous exclusion. So here for your edification is Plastic Letters cut by cut.
Fan Mail: This song kicks off side one as a prime example of rock as a vehicle for the genuine imitation life. Debbie’s slightly remorseful vocals throw a monkey wrench of doubt into the superstar machinery while the band plays what can best be described as a pop/rock dirge. Lyrically, this one’s a biting delight.
Denis: This cover of the golden gasser is the closest thing to a commercial A-side on the album and for a group whose creative attitude is slightly out of left field, their version is pretty much by the numbers. Look for this to be a single but not until the album’s already gone gold.
Bermuda Triangle Blues (Flight 45): This ode to death by supernatural misadventure has the band hitting the high points as Debbie’s rather straightforward vocal delivery sets the stage for some appropriately haunting instrumentals. Highlighted are two outstanding keyboard moments as James Destri’s apocalyptic hooks strike straight at the emotional heart of this song.
Youth Nabbed As Sniper: Some conventional rock lines propel this tale of derangement through some subtle plot twists that showcase the band’s word prowess. Blondie’s often tongue in cheek treatment of serious subjects is evident here as Debbie’s vocals do a psychological shrink job on the songs’s title character.
Contact in Red Square: Effectively drawn comic book pop that plays the excesses of the spy game to the entertaining hilt. Debbie’s stance as slightly hesitant Marta Hari is a class underplaying.
(I’m always touched by your) Presence Dear: The closest this album comes to a romantic ballad shows the band capable of handling songs of a more traditional mold. Don’t let this get around but Debbie could probably pass for Olivia Newton-John in a pinch. A nice counter to the rest of the madness.
I’m On E: A speeded up, slightly out of whack version of “Crocodile Rock” that bounces a long at an inoffensive but movable pace. Good clean fun that won’t tax your already overworked brain cells.
I Didn’t Have The Nerve To Say No: Excedrin headache number 5. The teen crisis done up to a rock and rolling fare-thee-well. Enthusiastic vocals and a common sense balance of rock dynamics, it’s songs like this that would have made the onset of puberty a bit easier to take.
Love At The Pier: Great pop torn straight from the pages of True Confessions as the prospect of a close encounter in the sand evolves into a highly melodramatic tour de force. We never find out if she does or not but, in this song, getting there is more than enough compensation.
No Imagination: Love on a cerebellum level allows for a bit of the old verbal flexing. Some calculating alliteration goes hand in hand with some thudding guitar chords in a racy outing, most of which you probably missed if you blinked. Good for repeated listenings.
Kidnapper has Blondie showing some goodtime roots in a honky tonk vien and proves an unusual segue into the straight-ahead dramatic metal of Detroit 442. Both show extreme influences and Blondie’s a band with the chops to handle them.
And finally Cautious Lip: An unintentional aside to Patti Smith that has Debbie milking a bizzarre pairing of blues and pop for everything emotionally possible.
Superlatives get old after a while and the time honored cliches just don’t do Plastic Letters justice. Suffice it to say that Blondie’s Plastic Letters are intellectual night moves.