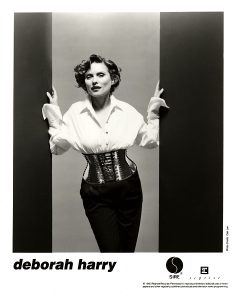 July 1993
SIRE RECORDS
Photograph by Dah Len
deborah harry
With her new album Debravation (Sire/Reprise), Deborah Harry has assembled an extraordinary cast of producers, players and special guests. These fourteen new songs were written with a very impressive list of collaborators.
The result is an album that once again find Deborah Harry pushing the boundaries of popular music into intriguing new territory. Debravation, in short, is business as usual in a career that has consistently embodied the unique, the innovative and the unusual.
Considering it’s been nearly four years since the release of her Sire/Reprise Records debut, Def, Dumb and Blonde, Debravation is a fitting title for fans 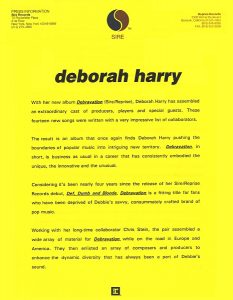 who have been deprived of Debbie’s savvy, consummately crafted brand of pop music.
Working with her long-time collaborator Chris Stein, the pair assembled a wide array of material for Debravation while on the road in Europe and America. They then enlisted an array of composers and producers to embrace the dynamic diversity that has always been a part of Debbie’s sound.
Among the co-conspirators: the award-winning team of Frannie Gold & Allee Willis, Arthur Baker, Toni C, Guy Pratt, Art Of Noise’s Anne Dudley, up-and-comer Leigh Foxx, Jon Astley and even cyberpunk godfather William Gibson, who worked with Stein on the future-shock track “Dog Star Girl.””Initially we were after a very immediate, very raw sound,” explains Debbie. “As the recording continued, however, different elements began to emerge, some of them quite layered and polished. What we ended up with, I 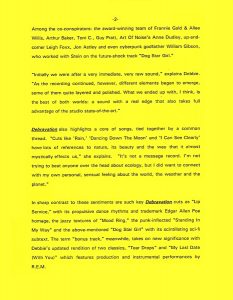 think, is the best of both worlds: a sound with a real edge that also takes full advantage of the studio state-of-art.”
Debravation also highlights a core of songs, tied together by a common thread. “Cuts like ‘Rain,’ ‘Dancing Down The Moon’ and ‘I Can see Clearly’ have lots of references to nature, it’s beauty and the way that it almost mystically effects us,” she explains. “It’s not a message record. I’m not trying to beat anyone over the head about ecology, but I did want to connect with my own personal, sensual feeling about the world, the weather and the planet.”
In sharp contrast to these sentiments are such key Debravation cuts as “Lip Service,” with it’s propulsive dance rhythms and trademark Edgar Allen Poe homage, the jazzy textures of “Mood Ring,” the punk-inflected “Standing In My Way” and the above-mentioned “Dog Star Girl” with its scintillating sci-fi subtext. The term “bonus track,” meanwhile takes on new significance with 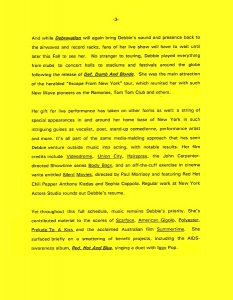 Debbie’s updated rendition of two classics, “Tear Drops and “My Last Date (With You)” which features production and instrumental performances by R.E.M.
And while Debravation will again bring Debbie’s sound and presence back to the airwaves and record racks, fans of her live show will have to wait until later this Fall to see her. No stranger to touring, Debbie played everything from clubs to concert halls to stadiums and festivals around the globe following the release of Def, Dumb And Blonde. She was the main attraction of the heralded “Escape From New York” tour, which reunited her with such New Wave pioneers as the Ramones, Tom Tom Club and others.
Her gift for live perfomances has taken on other forms as well: a string of special appearances in and around her home base of New York in such 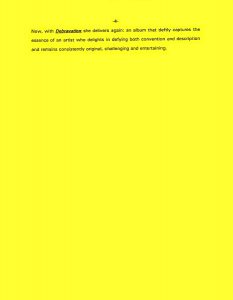 intriguing guises as vocalist, poet, stand-up comedienne, performance artist and more. It’s all part of the same media-melding approach that has seen Debbie venture outside music into acting, with notable results. Her film credits include Videodrome, Union City, Hairspray, the John Carpenter directed Showtime series Body Bags, and an off-the-cuff excercise in cinema verite entitled Silent Movies, directed by Paul Morrisey and featuring Red Hot Chilli Pepper Anthony Kiedas and Sophia Coppola. Regular work at New York Actors Studio rounds out Debbie’s resume.
Yet throughout this full schedule, music remains Debbie’s priority. She’s contributed material to the scores of Scarface, American Gigolo, Polyester, Prelude To A Kiss and the acclaimed Australian film Summertime. She surfaced briefly on a smattering of benefit projects, including the AIDS awareness album, Red, Hot and Blue, singing a duet with Iggy Pop.
Now, with Debravation she delivers again: an album that deftly captures the essence of an artist who delights in defying both convention and description and remains consistantly original, challenging and entertaining. 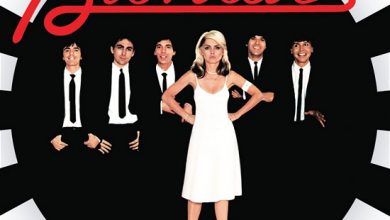 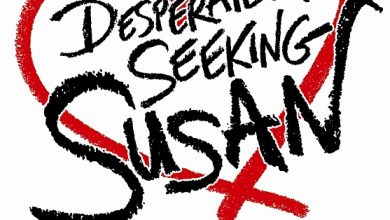 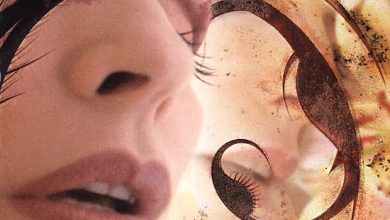