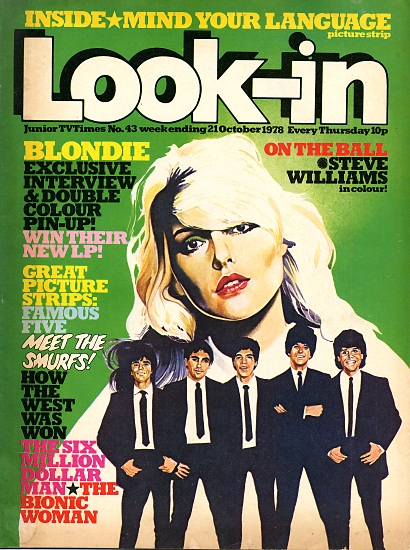 21st October 1978
PICTURE THIS…
BLONDIE ARE TOPS!
Written by: Richard Tippett
Now firmly set to establish themselves as one of the most prolific chart-hit bands in the music business, Blondie are back in business yet again with their third hit on the trot, Picture This.
And for the second time in succession, Look-in was on the other end of a telephone line to take a call from one of the members of the band. Last time it was keyboard star Jimmy Destri from America; on this occasion guitarist Chris Stein rang from Hamburg at the beginning of Blondie’s tour there – just days after completing a successful round of concerts in Britain.
“They were great,” Chris told Richard Tippett. “We were more together than the last time we played in Britain. What we like most about playing there is the great musical tradition that exists. You know that bands like the Beatles and the Stones hailed from Britain, and that you’re following in a great line of musical heroes.”
Blondie are attracting a dedicated following now across the country. Continued Chris: “We picked up a Newcastle United supporter when we played the north-east. He followed us around to all our gigs, and we knew he was always there because we could see his black-and-white striped Newcastle shirt around the concert halls.” 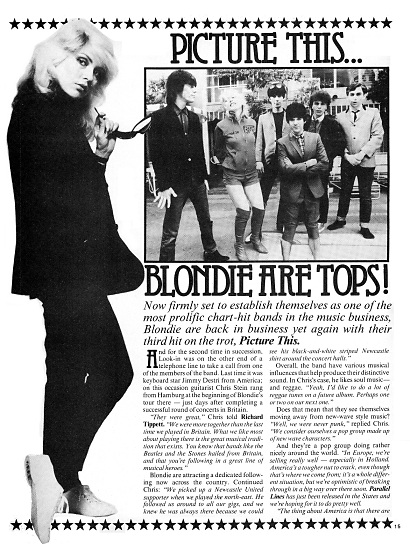 Overall, the band have various musical influences that help produce their distinctive sound. In Chris’s case, he likes soul music – and reggae. “Yeah, I’d like to do a lot of reggae tunes on a future album. Perhaps one or two on our next one.”
Does that mean that they see themselves moving away from the new-wave style music?
“Well, we were never punk,” replied Chris. “We consider ourselves a pop group made up of new wave characters.”
And they’re a pop group doing rather nicely around the world. “In Europe, we’re selling really well – especially in Holland. America’s a tougher nut to crack, even though that’s where we come from; it’s a whole different situation, but we’re optimistic of breaking through in a big way over there soon. Parallel Lines has just been released in the States and we’re hoping for it to do pretty well.
“The thing about America is that there are so many different types of radio station playing so many different artists that it can be difficult to get the original airplay. That’s why I prefer British radio. They concentrate more on mainstream music.”
Somewhere where music – Blondie-type music – looks like taking off in a big way is Bangkok – yes. Bangkok, capital of Thailand in the mystical East. Chris isn’t the first member of the band to rave about the place. “We did a concert there a little while ago, and it turned out 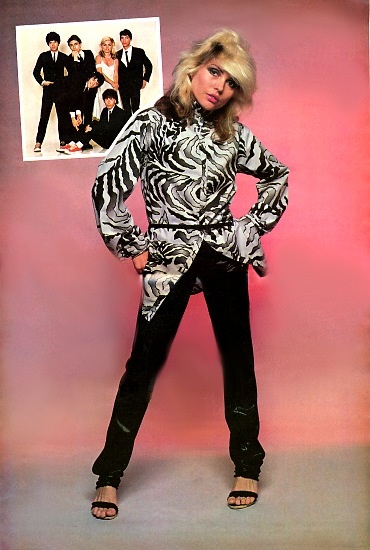 to be the most exciting place we’d ever been to. Bangkok’s a place that’s developing now as a city – it’s becoming really international and there’s a constant feeling of excitement about it: lots of big parties take place all over the city.
“We were the first band of our kind to play there – Bangkok doesn’t have a history of rock music – and the audience was really excited and curious about what we did. We’d just gone over as a break from an Australian tour we were doing, and it turned out to be the best part of the whole trip.”
Back home, Blondie have now clocked up a trio of hit singles in Britain. Which one is Chris’s favourite? “I think the one I like the most is Picture This. Probably because all the members of the band had a hand in writing it.
“You know, we’re already preparing songs for our next album, although Parallel Lines has only recently been released. In fact, our next LP will probably be out around spring of next year.” Good news for all Blondie fans who 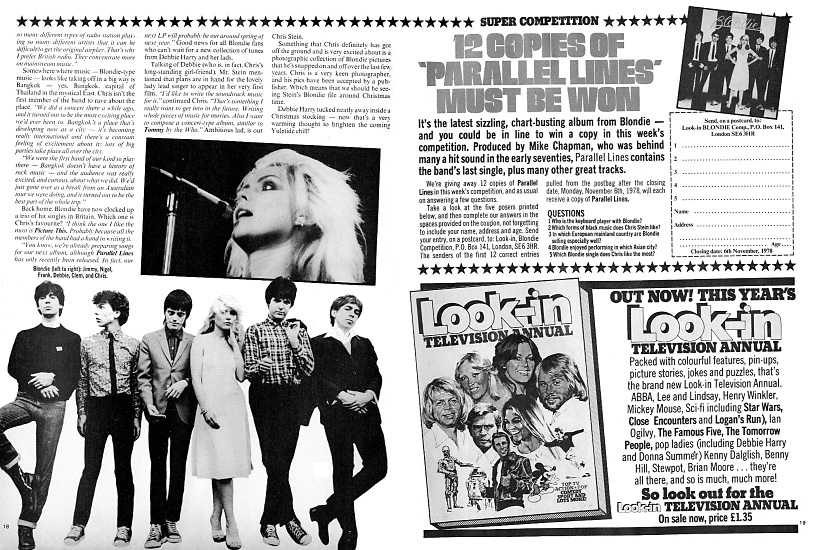 can’t wait for a new collection of tunes from Debbie Harry and her lads.
Talking of Debbie (who is in fact Chris’s long-standing girl-friend) Mr Stein mentioned that plans are in hand for the lovely lady lead singer to appear in her very first film. “I’d like to write the soundtrack music for it,” continued Chris. “That’s something I really want to get into in the future. Writing whole pieces of music for movies. Also I want to compose a concert-type album similar to Tommy by the Who.” Ambitious lad, is our Chris Stein.
Something that Chris definitely has got off the ground and is very excited about is a photographic collection of Blondie pictures that he’s snapped on and off over the last few years. Chris is a keen photographer, and his pics have been accepted by a publisher. Which means that we should be seeing Stein’s Blondie file around Christmas time.
Debbie Harry tucked neatly away inside a Christmas stocking – now that’s a very warming thought to brighten the coming Yuletide chill!

Blondie - Hanging On The Telephone 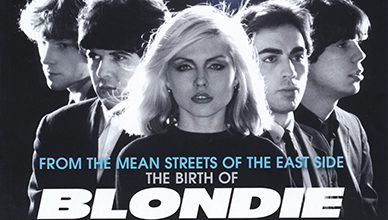 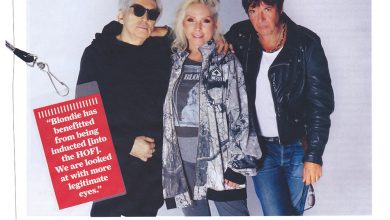 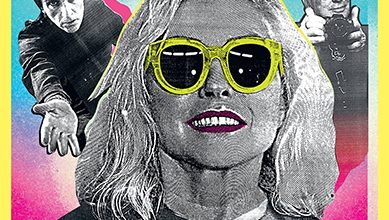 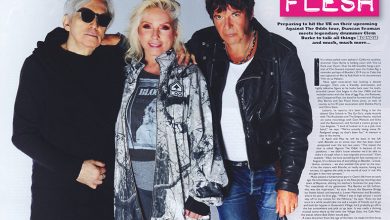