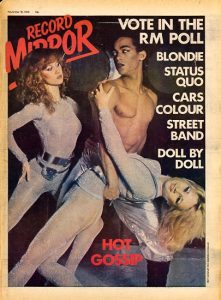 BARRY CAIN threads his way through the decaying labyrinth known as New York, finds the other faces behind Debbie Harry, unearths two if the ‘fabulous’ pre-punk punkettes, the Shangri-Las, and slums his way into a Blondie gig.

DID YOU know there were four other people in Blondie apart from the sugar candy kisser of Debbie Harry and her beau Chris Stein (the man who bought his eyebrows from Axminster)?
Yeah, it’s true, I’ve seen ’em with my own eyes. Seen ’em on their home ground too – in ol’ numbland New York, that necropolis with neon tombstones where…
Oh, so you think it isn’t dead huh? Listen, any city that shows ‘The Partridge Family’ twice every morning on TV split only by ‘I Love Lucy’ and ‘The Brady Bunch’ re-runs just HAS to be dead, or severely wounded.
Feeling ever so slightly like a surrogate David Attenbrough venturing into fleshy foliage in search of an ambiguous tribe, I took a cab to a nocturnal recording studio in one of the more uncivilised districts where the natives eat strange, exotic food they call “Burrga Keeng”, which they claim possesses health giving properties and drink copious amounts of The Pepsee which winds its tortuous way through the narrow streets and is infested by a vicious animal known locally as “Deemugger”.
Alighting from the cab I asked a statuesque black where I might find the Unknown Blondie. His eyes froze, he uttered a primal scream the pierced the night time miasma, turned and fled into a brick shrubbery.
“My God,” I thought, “What have I let myself in for.”
Just then a wizened, hoary (old) man tapped me on the shoulder like they always do at such moments, and rasped: “The Unknown Blondie is the tribe of taboo in these parts bwana. Tis a curse of a thousand MacDonalds to merely mention the name.”
“But you mentioned it.”
“Yes – and I’m only 19!” he wheezed pointing to a dilapidated building. “There. But beware…”
A tangled web of close circuit TVs guarded the door. I beat my way through and slid into a waiting elevator. Up, up, up in the modern day quadriga. Up into a starfilled limbo. And not a trendy Desmond Morris in sight.
Out. Empty. No sign of life. Then I heard a rustle and a figure dashed from behind one speaker and disappeared beneath a control desk. “Nervy. Not used to being recognised,” I concluded. There was some undecipherable chatter. I reached for my Pistols’ album.
“You are a journalist?” It was the voice of Clem Burke. He touched me in what I thought was an Unknown Blondie ritual. But I soon realised he was just making sure I was real. 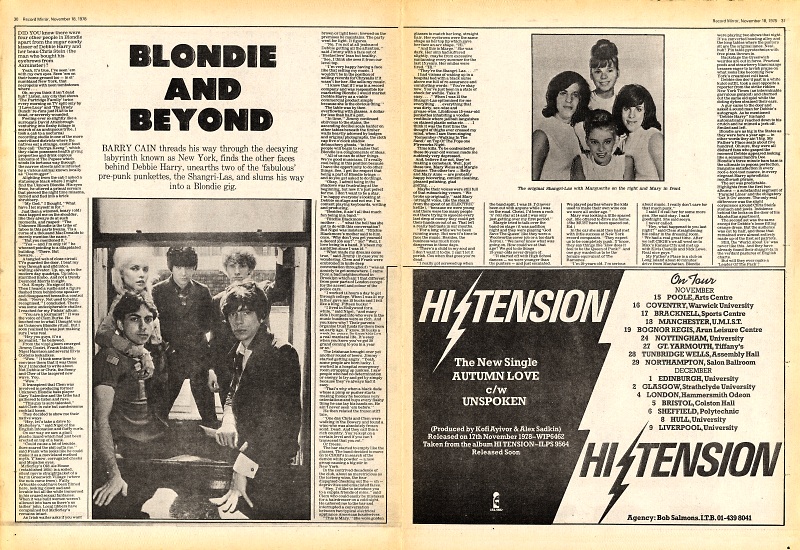