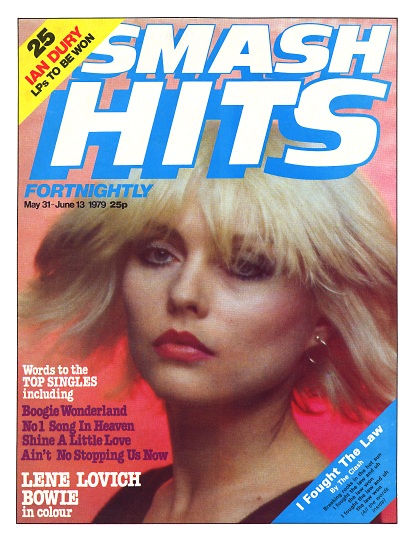 HANGING ON THE TELEPHONE

AS WE REPORTED a few weeks back, Blondie have at long last broken through back in their home country. “Heart Of Glass” has taken the number one spot on the American singles charts just as it has all over the rest of the world.
It’s been a long time coming but now Chris Stein, guitarist, band leader and Debbie Harry’s boyfriend, can take pride in the platinum disc on his wall. Beside it is a page from a music paper showing the placing for the one week that his song stayed at the very top of the biggest chart in the world.
When he came through on the line to Smash Hits from his home in New York, we asked him whether he thought “Heart Of Glass” had hit big there purely because of its disco appeal.
“I’m sure that helped,” Chris said, “but it was bound to be a hit because we made a lot of friends over the years. There was initially a lot of reluctance to play our records on the radio because we were considered ‘new wave’.
“In England we’re considered just straight pop but over here they think we’re crazy and far out. They’re very conservative.”
The success of “Heart Of Glass” Stateside has meant that the band have had to postpone the recording of their fourth album but, when we spoke to Chris, he was taking a day off from studio work with producer Mike Chapman.
They’ve already got most of the songs worked out and they’re hoping to have everything tied up for release in late August/early September with a completely new single finished and ready to follow up “Sunday Girl”.
The actual contents of the record are being kept close to the chest, but what they’ve done so far is described by Chris as “mainly fast hard rock. There is one disco number but nothing’s finalised yet.”
It won’t be called “Eat To The Beat” as reported, though it will contain a track of that name.
Chris is also producing another album at the same time by a French band called Casino Music who play “disco/funk/reggae kind of things”. He’s also supervising the planning of his film project, a remake of a French futuristic flick, “Alphaville”, to star Debbie and Robert Fripp (formerly of King Crimson). Chris doesn’t plan to act in the movie, intending instead to look after the musical side of things as well as dabbling in cinematography. Indeed, photography is one of his prime interests and Robert Fripp’s new album, “Exposure”, has a sleeve designed and photographed by Chris.
Rumours have occasionally filtered through to these shores about personal changes in the band, some of them even going as far as to suggest that Chris himself was leaving and that Debbie was to be launched as a solo act.
We asked Chris to comment. “The only change likely to take place in Blondie would be if we got David Bowie in to play tambourine!” he replied.
A British tour is now being set up for September to promote the album. Does the new-found American success mean that British fans are likely to see less of the band? Chris is adamant that this will in now way affect their visits to this country, which they regard as their second home.
“The more we come to Britain the more we enjoy it,” he says. “Hopefully, the more success our records have, the less we will have to tour and the more time we’ll have for creative projects. Touring quickly becomes very monotonous.
“Everybody in the band loves England. It’s got to the stage that when we hear English accents we get homesick. Last time we were there we went to a football match. Now they got nothing like that here.” 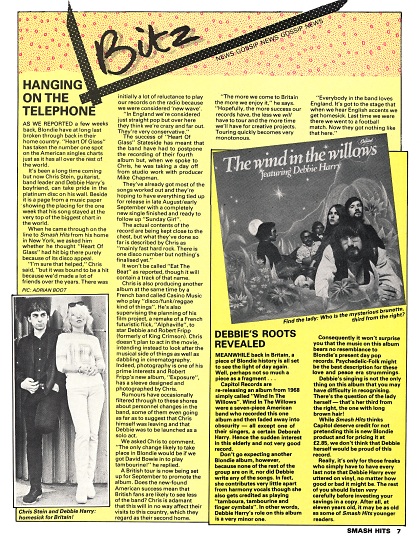 MEANWHILE back in Britain, a piece of Blondie history is all set to see the light of day again. Well, perhaps not so much a piece as a fragment…
Capitol Records are re-releasing an album from 1968 simply called “Wind In The Willows”. Wind In The Willows were a seven-piece American band who recorded this one album and then faded away into obscurity – all except one of their singers, a certain Deborah Harry. Hence the sudden interest in this elderly and not very good record.
Don’t go expecting another Blondie album, however, because none of the rest of the group are on it, nor did Debbie write any of the songs. In fact, she contributes very little apart from harmony vocals though she also gets credited as playing “tamboura, tambourine and finger cymbals”. In other words, Debbie Harry’s role on this album is a very minor one.
Consequently it won’t surprise you that the music on this album bears no resemblance to Blondie’s present day pop records. Psychedelic-Folk might be the best description for these love and peace era strummings.
Debbie’s singing is not the only thing on this album that you may have difficulty in recognising. There’s the question of the lady herself – that’s her third from the right, the one with long brown hair!
While Smash Hits thinks Capitol deserve credit for not pretending this is new Blondie product and for pricing it at £2.85, we don’t think that Debbie herself would be proud of this record.
Really, it’s only for those freaks who simply have to have every last note that Debbie Harry ever uttered on vinyl, no matter how good or bad it might be. The rest of you should listen very carefully before investing your savings in a copy. After all, at eleven years old, it may be as old as some of Smash Hits younger readers.