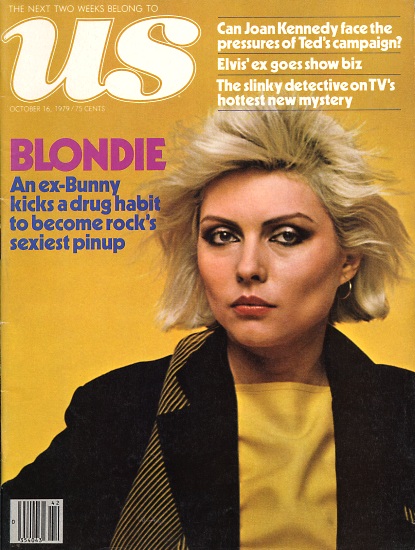 With drug addiction and a stint as a Playboy Bunny behind her, new-wave rocker Deborah Harry – front-woman for the band Blondie – is burning up the charts and turning on the audiences. But the platinum-haired siren, who lives quietly with the group’s lead guitarist, says it’s music and not a sexy image that sells Blondie.
by Jane Goldman

By Jane Goldman
“You’ve seen is on TV and you’ve read about us – now you’re gonna meet the real Blondie,” shouts Deborah 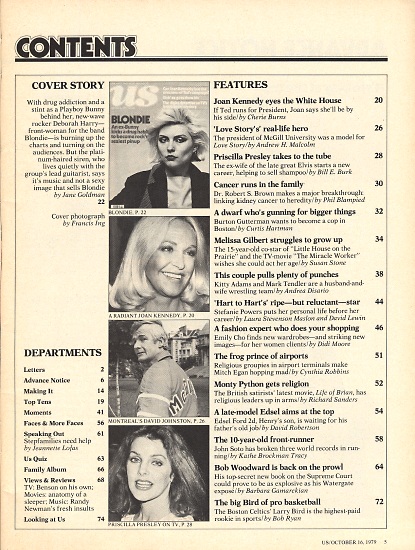 Harry, 34, the 5-foot-3-inch ex-Bunny who kicked drugs to lead the hottest new band in rock. The crowd cheers her announcement as they spill over from the outdoor theater in New York’s Central Park and hang from surrounding rocks and trees for a better view.
The music industry may be depressed these days, but not Blondie. The five men and one woman who make up the band are the first progressive new-wave rockers to grab the mainstream market with a platinum album, Parallel Lines (five million copies sold worldwide), and two monster singles, “Heart of Glass” and “One Way or Another.” The crowd is there to bounce to Blondie’s catchy pop-rock, to boogie to the disco-ish sound of the two-million-selling “Heart of Glass,” and to sing along with the group’s fresh, impudent lyrics. But mostly the crowd is there, as they have been all summer on the band’s S.R.O. 27-city, cross-country tour, to get a good look at Debbie, now rock’s No 1 pinup.
With a powerful opening herald from drummer Clem Burke, the crowd meets the real Blondie: Burke on drums, Chris Stein and Frank Infante on guitar, Jimmy Destri on keyboards, Nigel Harrison on bass and Debbie on vocals. Blondie, as its members take great pains to point out, is a group, not a girl. But seconds after the show starts, all eyes are on Debbie as she dances around the stage in a skintight red jumpsuit (sans underwear) and matching spike heels, teasing drooling front-row fans with the lyrics: “When I met you in the restaurant/You could tell I was no debutante.”
The implication is obvious. Donna Summer may sing about bad girls, but here’s the real enchilada – a woman who’s been there and flaunts it. Then a new song begins, and suddenly Debbie is an angel – naïve and innocent. 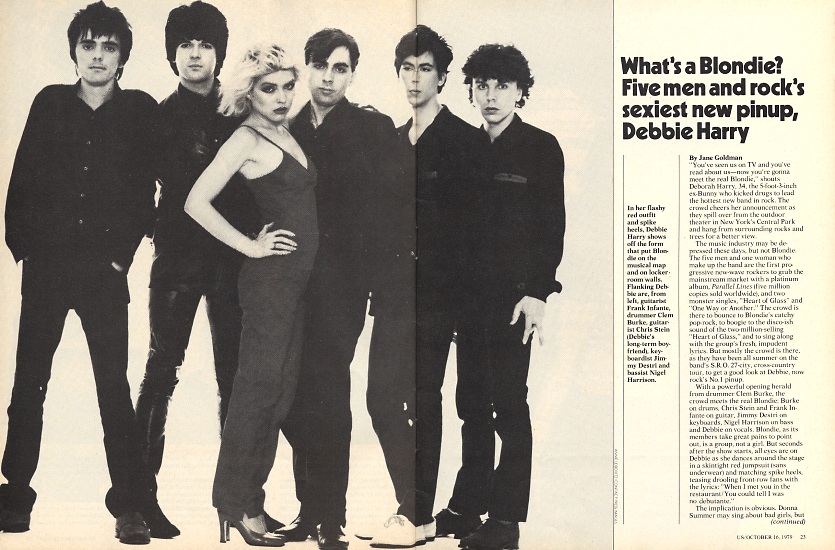 And when she jokes with the audience in that one-of-the-boys New Jersey accent, there’s a whole new dimension: The rock goddess with the peroxide hair, ice-blue eyes and ruby-red lips may even be accessible.
She’s not, of course. Since the group was formed six years ago, Debbie has been living in unmodish fidelity with Stein, 29, the band’s lead guitarist and co-founder. The two share a modest (except for a tiger-striped kitchen floor) three-room penthouse in Manhattan and live quietly.
But there is nothing average about their onstage antics. Debbie uses her sexual vamping and old-fashioned star appeal as a magnet. The pull works. With its just-release album, Eat to The Beat, a single, “Dreaming,” a new poster and a projected tour, Blondie is on its way to becoming the nation’s most commercial rock act.
Relaxing at home with Stein at her side, Debbie does not deny that her sex appeal has been influential in Blondie’s success. “Sex is a very strong motivation,” she says, gripping the coffee table with 10 painted toes. “I know the kind of effect I have on people. That’s been happening to me since I was a little girl. The sex thing is just my lot in life, I guess,” she continues. “When I was 4 years old, I used to get a lot of old men flashers following me. I don’t know what it is, except it’s something that is not specifically me. It’s an illusion I work at.”
Debbie gets irate at the mention of recent stories that suggest she is the only reason Blondie is making it. “It’s the music that sells Blondie,” she insists, “not the sex. But I will admit that it’s the sex that creates the interest initially. One thing I’m not is clean-cut America, Miss Sweetness and Light.”
Few would argue the point. But things didn’t start that way. Debbie, who was born in Miami, was adopted at 3 months by Richard and Catherine Harry in Hawthorne, N.J. It was in this quiet, middle-class suburb that Debbie and younger sister Martha spent their formative years, taking piano and dance lessons. The teenage Debbie started going to Greenwich Village, mingling with hippies and musicians. Finally, she quit school and moved 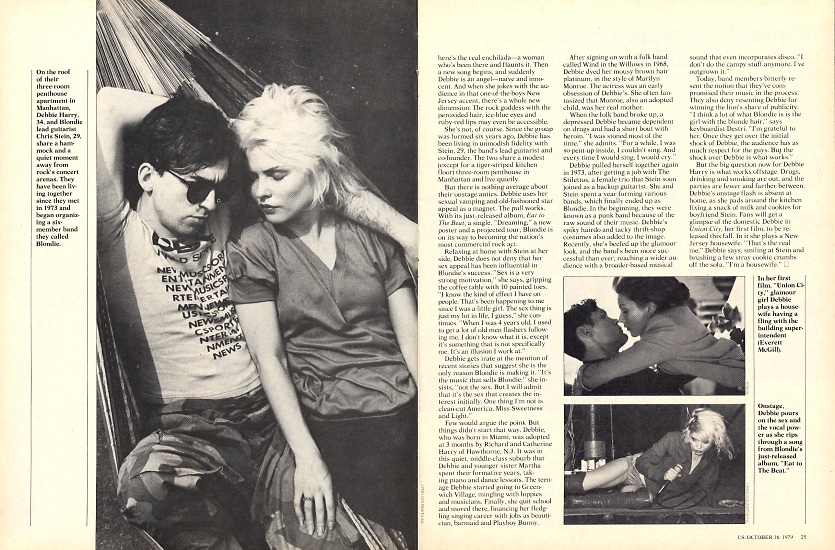 there, financing her fledgling singing career with jobs as beautician, barmaid and Playboy Bunny.
After signing on with a folk band called Wind in the Willows in 1968, Debbie dyed her mousy brown hair platinum, in the style of Marilyn Monroe. The actress was an early obsession of Debbie’s. She often fantasized that Monroe, also an adopted child, was her real mother.
When the folk band broke up, a depressed Debbie became dependent on drugs and had a short bout with heroin. “I was stoned most of the time,” she admits. “For a while, I was so pent-up inside, I couldn’t sing. And every time I would sing, I would cry.”
Debbie pulled herself together again in 1973, after getting a job with The Stilettos, a female trio that Stein soon joined as a backup guitarist. She and Stein spent a year forming various bands, which finally ended up as Blondie. In the beginning, they were known as a punk band because of the raw sound of their music. Debbie’s spiky hairdo and tacky thrift-shop costumes also added to the image. Recently, she’s beefed up the glamour look, and the band’s been more successful than ever, reaching a wider audience with a broader-based musical sound that even incorporates disco. “I don’t do the campy stuff anymore. I’ve outgrown it.”
Today, band members bitterly resent the notion that they’ve compromised their music in the process. They also deny resenting Debbie for winning the lion’s share of publicity. “I think a lot of what Blondie is is the girl with the blonde hair,” says keyboardist Destri. “I’m grateful to her. Once they get over the initial shock of Debbie, the audience has as much respect for the guys. But the shock over Debbie is what works.”
But the big question now for Debbie Harry is what works offstage. Drugs, drinking and smoking are out, and the parties are fewer and farther between. Debbie’s onstage flash is absent at home, as she pads around the kitchen fixing a snack of milk and cookies for boyfriend Stein. Fans will get a glimpse of the domestic Debbie in Union City, her first film, to be released this fall. In it she plays a New Jersey housewife. “That’s the real me,” Debbie says, smiling at Stein and brushing a few stray cookie crumbs off the sofa. “I’m a housewife.”