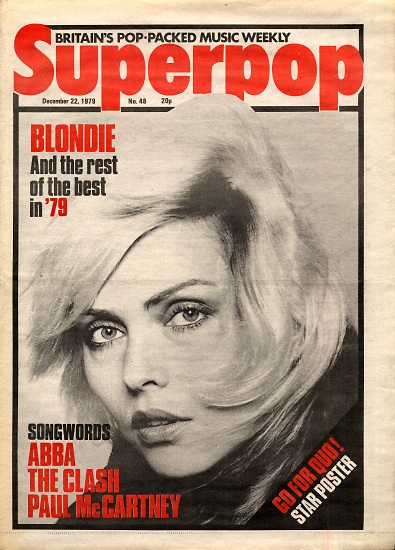 1979 has brought truckloads of new stars to the charts and left a welter of fallen heroes in its wake.
As always, there was something old, something new and gangs of bandwagon jumpers who borrowed what they could when no one was looking and gave nothing back in return.
1979 won’t go down as one of the most important years in rock history, but it sure was a lot of fun.
Anarchy and thin, drawn faces finally disappeared, bands who saw no future got exactly that as they unceremoniously bit the dust. Their more robust, talented brothers like the Stranglers, the Police and the Boomtown Rats went on to feature heavily in the charts and develop musically along very different paths. But more of them later.

Blondie undoubtedly cracked it. The biggest selling single and the best leading lady. But lots more happened, too. This is a Superpop salute to the people who made 1979 such a fine time!

Platinum Blondie
1979 was definitely Blondie’s year. They came from America in search of the fame and fortune which had so far 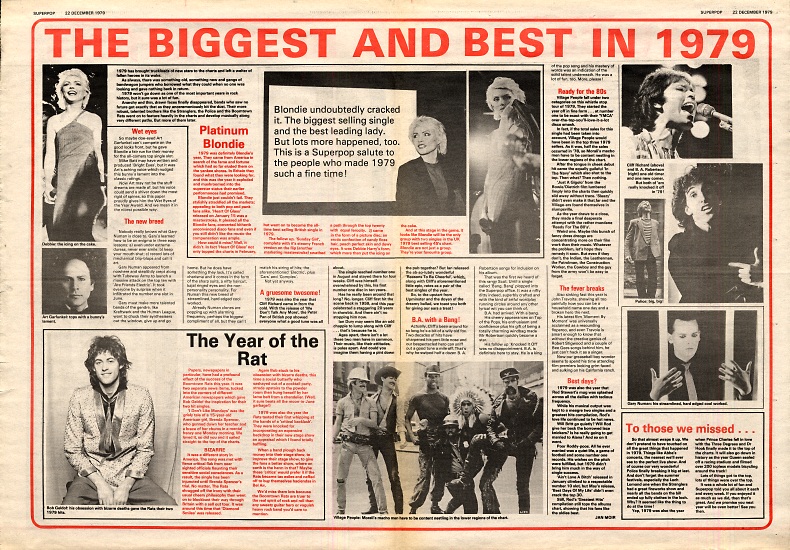 eluded them on the yankee shores. In Britain they found what they were looking for, and this was the year it exploded and mushroomed into the superstar status their earlier performances had promised.
Blondie just couldn’t fail. They stylishly straddled all the markets; appealing to both pop and punk fans alike. ‘Heart Of Glass’ released on January 15 was a masterstroke. It pleased all the Blondie fans, converted hitherto unconvinced disco fans and even if you still didn’t like the music the compensation was ample.
How could it miss? Well, it didn’t. In fact ‘Heart Of Glass’ not only topped the charts in February, but went on to become the all-time best selling British single in 1979.
The follow up, ‘Sunday Girl’, complete with it’s steamy French version on the flip (another marketing masterstroke) swathed a path through the top twenty with equal ferocity. It came in the form of a picture disc; an erotic confection of candy floss hair, peach perfect skin and dewy eyes. It was Debbie Harry’s form, which more than put the icing on the cake.
And at this stage in the game, it looks like Blondie will be the only group with two singles in the UK 1979 best selling 45’s chart. Blondie are not just a group. They’re your favourite group.