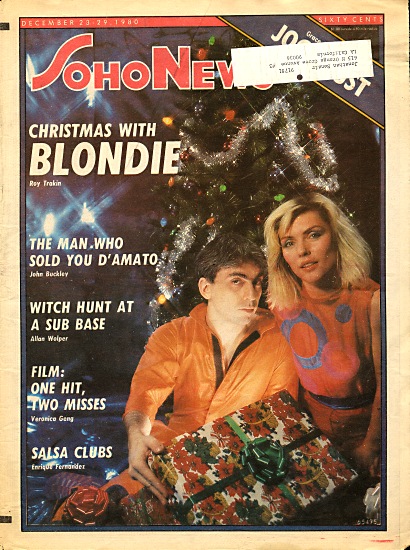 M U S I C
According to the Bible, “Rapture” will occur when Jesus Christ returns to retrieve a third of the Earth’s population for the Kingdom of Heaven, leaving the rest to rot with their sins. A few weeks ago, a caller phoned TV Party, the anarchic cable show co-hosted by Blondie guitarist Chris Stein and resident bon vivant Glen O’Brien, announcing that the “Rapture” had already taken place.
“I told the guy that I hadn’t noticed anyone missing,” recalls Stein. “And he laughed: ‘That’s because you and all the people you hang out with are fucked!'”

BLONDIE: AT HOME FOR THE HOLIDAYS
by Roy Trakin

Autoamerican, Blondie’s fifth and latest album, shows that the band is moving in different circles these days. A panorama of American pop over the last 50 years, it marks not only a return to traditional musical values but classical human virtues as well. There is an eerie parallel to Double Fantasy in Autoamerican’s domestic bliss and neoconservative affirmation of mutual respect, commitment, trust and love. From the ’30s Depression swing of “Here’s Looking at You” to the sudsy pseudocountry of “Go Through It” and the yearning Tin Pan Alley of Camelot’s “Follow Me,” it is clear the group’s cool cynicism has given way to compassion. This time, at least, the heart is flesh and blood, not glass.

I’m sitting in the living room of Chris Stein and Debbie Harry’s modest midtown penthouse. Stein lounges on the sofa amid a pile of fan letters, photographs, party invitations, business letters, gold records, paintings, drawings and electronic toys, the first signs of a healthy potbelly creasing his middle. Phones ring and the stereo blasts as photographer Bill Coupon parades through the apartment with a wall-sized blowup of Debbie for Chris’ approval. The lady herself is in the kitchen hollowing out pumpkins. A day in the life of America’s favorite punk couple, the King and Queen of the N. Y. underground.
“I’m disturbed by the narrowness of rock ‘n’ roll fans and what they want to listen to,” Stein says in reaction to my observation on Autoamerican’s old-fashioned appeal. “It’s sad that a lot of these older types of music will get lost. The world of rock is always being sold as a socially relevant commodity, when it’s just show biz like anything else. I’m more versed in a general form of pop music rather than in any specifics. I think the tragedy is that all these tastes get broken down with everybody retreating to his own little camp. The most successful acts are the ones that constantly create their own frame of reference.”
His point is that we shouldn’t judge Blondie’s forays into assorted musical styles against the real things. Obviously, the boozy, lilting “The Tide Is High” has more to do with Jamaica, Queens, than the Caribbean island. Of course “Live It Up” is a jokey, cocktail lounge version of “Bad Girls.” Sure, “Faces” is to cabaret as Betty Boop is to Edith Piaf. Just remember Blondie was a cartoon long before it became a group. Still, Autoamerican’s “songs for the new depression” ambience seems a trifle smug.
“It remains to be seen what effect the record will have,” says Stein. “We wanted to make music that would cross over. I would like to see the record help resolve racial tensions by bringing different audiences together. When the new wave kids and the rappers get together, that’ll be something. Eventually, they’ll all meet in the middle, where you’ll have a strong race of young people that won’t be divided by stupid racial issues.”
Nonetheless, you can be sure the hardcore rock critics aren’t going to like Autoamerican very much.
“Whatever you do, reviewers are always divided in thirds,” Stein observes. “They either like it, hate it or have 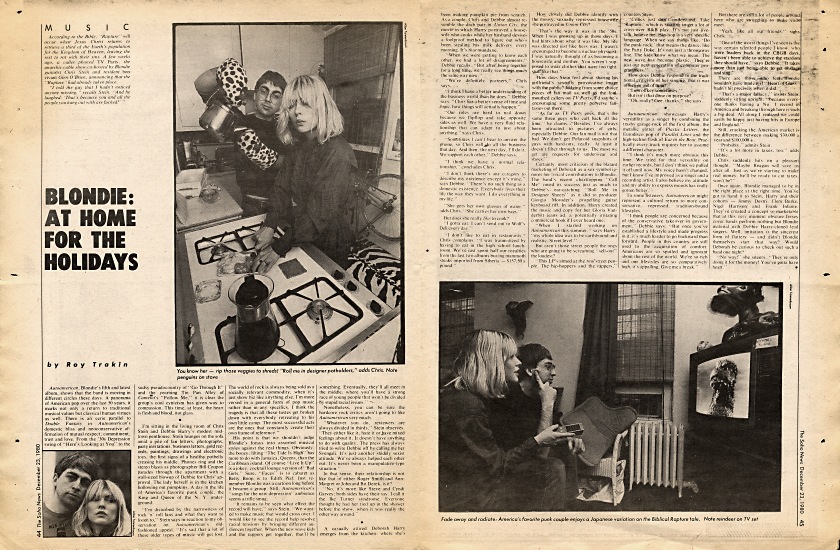 mixed feelings about it. It doesn’t have anything to do with quality. The press has always tried to write Debbie off by calling me her Svengali. It’s just another snidely sexist attitude. We’ve always helped each other out. It’s never been a manipulative-type situation.”
In that sense, their relationship is not like that of either Roger Smith and Ann Margret or John and Bo Derek, is it?
“No, it’s more like Steve and Cyndi Garvey; both sides have their say. I call it the Ike Turner syndrome. Everyone thought he had her tied up in the shower before the show, when it was really the other way around.”

A casually attired Deborah Harry emerges from the kitchen, where she’s been making pumpkin pie from scratch. As a couple, Chris and Debbie almost resemble the drab pair in Union City, the movie in which Harry portrayed a housewife who cooks while her husband devises a foolproof method to figure out who’s been stealing his milk delivery every morning. It’s that mundane.
“When we were getting to know each other, we had a lot of disagreements,” Debbie recalls. “But after being together for a long time, we really see things much the same way now.”
“We’re definitely partners,” Chris says.
“I think I have a better understanding of the business world than he does,” Debbie says. “Chris has a better sense of time and logic, how things will actually happen.”
“Our roles are hard to nail down because we flipflop and take opposite sides as well. We have a very fluid relationship that can adapt to just about anything,” says Chris.
“Sometimes I can’t bear to answer the phone, so Chris will do all the business that day. And then, the next day, I’ll do it. We support each other.” Debbie days.
“I think we have a normal relationship,” concludes Chris.
“I don’t think there’s any category to describe my existence except it’s mine,” says Debbie. “There’s no such thing as a domestic existence. Everybody lives their life the way they want. I do everything in my life.”
“She gets her own glasses of water,” adds Chris. “She carried her own bags.”
But does she really like to cook?
“I gotta eat. I can’t send out to Wolf’s Deli every day.”
“I don’t like to eat in restaurants,” Chris complains. “I was traumatized by having to eat in the high school lunchroom. We’ve just spent half our royalties from the last two albums buying mammoth steaks imported from Siberia – $157.50 a pound.”
How closely did Debbie identify with the mousy, sexually repressed housewife she portrayed in Union City?
“That’s the way it was in the ’50s. When I was growing up in those days, I had hints about what it was like. My life was directed just like hers was. I wasn’t encouraged to become a nuclear physicist. I was naturally thought of as becoming a housewife and mother. You weren’t supposed to wear clothes that were too tight, stuff like that.”
How does Stein feel about sharing his girlfriend’s sexually provocative image with the public? Judging from some choice pieces of fan mail as well as the foul-mouthed called on TV Party, I’d say he’s encouraging some pretty perverse fantasies out there.
“As far as TV Party goes, that’s the same three guys who call back all the time,” he claims. Besides, I’ve always been attracted to pictures of girls, especially Debbie. Our fan mail is not that bad. We don’t get Polaroid snapshots of guys with hard-ons, really. At least it doesn’t filter through to us. The most we get are requests for underwear and shoes.”
Certainly, most criticism of the blatant marketing of Deborah as a sex symbol ignores her lyrical contributions to Blondie. The band’s recent chattopping “Call Me” owed its success just as much to Debbie’s ear-catching “Roll Me in Designer Sheets” as it did to producer Giorgio Moroder’s propelling guitar keyboard riff. In addition, Harry created the music and copy for her Gloria Vanderbilt jeans ad, a potentially irritating commercial hook if I ever heard one.
“When I started working on Autoamerican this summer,” says Harry, “my whole idea was to be earthbound and realistic. Street level.”
But aren’t those street people the ones who are going to be screaming “sell-out” the loudest?
“This LP’s aimed at the real street people. The hip-hoppers and the rappers,” counters Stein.
“Critics just don’t understand. Take ‘Rapture,’ which is starting to get a lot of cross-over R&B play. It’s not just jive-talk, believe me. Hip-hop is a very specific language. When we say things like, ‘Do the punk-rock,’ that means the dance, like the Patty Duke. It’s not just a throwaway line. The kids know what we mean. The new wave has become plastic. They’re just our next generation of computer programmers.”
How does Debbie respond to the traditional criticism of her singing, that it was offkey or out of tune?
“I am offkey sometimes.”
But isn’t that done on purpose?
“Oh, really? Gee, thanks,” she says.

Autoamerican showcases Harry’s versatility as a singer by combining the trashy garage-rock of the first album, the metallic glitter of Plastic Letters, the Eurodisco pop of Parallel Lines and the high-techno flash of Eat to the Beat. Practically every track requires her to assume a different character.
“I think it’s much more obvious this time. We tried for that versatility on earlier records, but I don’t think we pulled it off until now. My voice hasn’t changed, but I know I’ve improved as a singer and a recording artist. I also believe my attitude and my ability to express moods has really gotten better.”
To some listeners, Autoamerican might represent a cultural return to more conservative, repressed, tradition-bound lifestyles.
“I think people are concerned because of the conservative takeover in government,” Debbie says. “But once you’ve established a lifestyle and made progress in it, it’s much harder to go backward than forward. People in this country are still used to the acquisition of comfort. Americans are so spoiled and ignorant about the rest of the world. We’re so rich and our lifestyles are so comparatively high, it’s appalling. Give me a break.”
But there are still a lot of people around here who are struggling to make ends meet.
“Yeah, like all our friends,” sighs Chris.
“One of the worst things I’ve seen is the way certain talented people I know, who were leaders back in the CBGB days, haven’t been able to achieve the stardom they should have,” says Debbie. “It takes more than just being able to get onstage and sing.”
There are those who feel Blondie wouldn’t have made it if “Heart of Glass” hadn’t hit precisely when it did.
“That’s a major fallacy,” insists Stein, suddenly sitting upright, “because everyone thinks having a No. 1 record in America and breaking through here is such a big deal. All along I realized we could easily be happy just having hits in Europe and England.”
Still, cracking the American market is the difference between making $30,000 a year and $100,000+.
“Probably,” admits Stein.
“It’s a lot more in taxes, too,” adds Debbie.
Chris suddenly hits on a pleasant thought. “Maybe Reagan will save us after all. Just as we’re starting to make real money, he’ll be ready to cut taxes, won’t he?”
Once again, Blondie managed to be in the right place at the right time. You’ve got to hand it to Stein, Harry and their cohorts – Jimmy Destri, Clem Burke, Nigel Harrison and Frank Infante. They’ve created a concept so marketable that at this very moment obscure Jersey cover bands perform nothing but Blondie material with Debbie Harry-cloned lead singers. Well, imitation is the sincerest form of flattery – and didn’t Blondie themselves start that way? Would Deborah be curious to check out such a band one night?
“No way!” she sneers. “They’re only doing it for the money! You gotta have heart.”

You know her – rip those veggies to shreds! “Roll me in designer potholders,” adds Chris. Note penguins on stove.