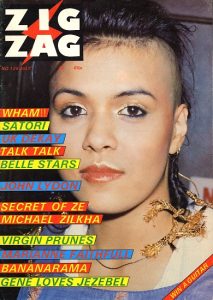 BLONDIE
MAKING TRACKS AND THE ART OF PARTIES

‘I’m going for some air’ says Debbie.
The B2 Art Gallery is oddly situated in derelict Thameside structures off Wapping’s hysterically termed High Street.
But no rundown jungle on the other side of town is gonna stop all the familiar faces charging over to the food, booze and prestige of the Lig Of The Year.
BLONDIE again. It was the place you had to be and then had to say you wish you hadn’t. But ligs have that effect.
So does BLONDIE.

Despite a serious attempt to write them off by the Rock Press, national and casual interest in DEBBIE HARRY still remains at fever level when she’s about. That’s why they’re doing four nights at Wembley Arena in September.
S’true there’s lost ground to be made up. ‘Koo Koo’ dared to be different and paid a price. Teaming Debbie and Chris Stein up with the Chic mastermen created an interesting hybrid of styles away from both parties accepted moulds and had some great moods and moments. Slagged and not a great setter in comparison to previous works. The new one ‘The Hunter’ returns to a simpler quicker Blondie sound. ‘We did it really fast, just went in there, said an obviously please NIGEL HARRISON man of bass guitar.

It shows BLONDIE back and jumping – dispelling rift rumours. It’s fun and more mainstream than the experiments of ‘Auto American’, and has a few classics to boot – the poignant little ‘English Boys’, the Smokey treatment of Mr Robinson’s ‘The Hunter Always Gets Captured By The Game’. Nothing to be ashamed of here. (Yes it got 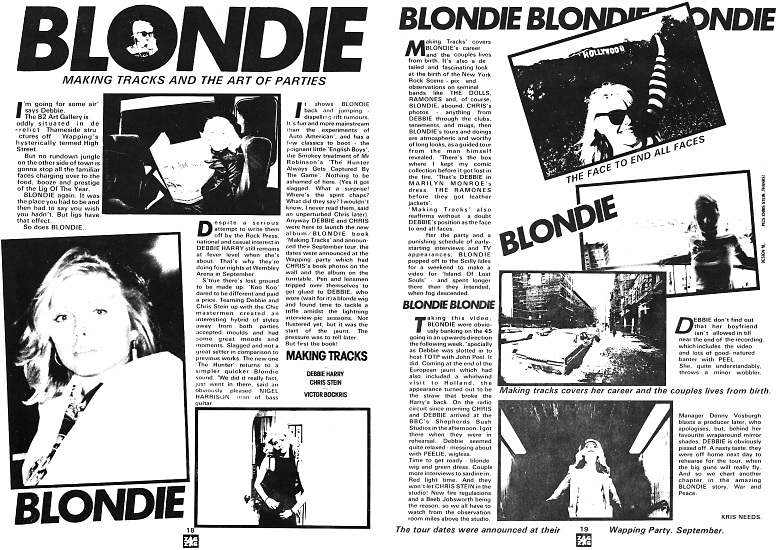 slagged. What a surprise! Where’s the spirit chaps? What did they say? I wouldn’t know, I never read them, said an unperturbed Chris later). Anyway DEBBIE and CHRIS were here to launch the new album/BLONDIE book ‘Making Tracks’ and announced their September tour. The dates were announced at the Wapping party which had CHRIS’s book photos on the wall and the album on the turntable. Pen and lensmen tripped over themselves to get glued to DEBBIE, who wore (wait for it) a blonde wig and found time to tackle a trifle amidst the lightning interview-pic sessions. Not flustered yet, but it was the start of the jaunt. The pressure was to tell later. But first the book!

‘Making Tracks’ covers BLONDIE’s career and the couples lives from birth. It’s also a detailed and fascinating look at the birth of the New York Rock Scene – pix and observations on seminal bands like THE DOLLS, RAMONES and, of course, BLONDIE, abound. CHRIS’s photos – anything from DEBBIE through the clubs, tenements, and mugs, then BLONDIE’s tours and doings are atmospheric and worthy of long looks, as a guided tour from the man himself revealed. ‘There’s the box where I kept my comic collection before it got lost in the fire, ‘That’s DEBBIE in MARILYN MONROE’s dress. THE RAMONES before they got leather jackets’.
‘Making Tracks’ also reaffirms without a doubt DEBBIE’s position as the face to end all faces.
After the party and a punishing schedule of early-starting interviews and TV appearances, BLONDIE popped off to the Scilly Isles for a weekend to make a video for ‘Island Of Lost Souls’ – and spent longer there than they intended, when fog descended.
Taking this video, BLONDIE were obviously banking on the 45 going in an upwards direction the following week, ‘specially as Debbie was slotted in to host TOTP with John Peel. It did. Coming at the end of the European jaunt which had also included a whirlwind visit to Holland, the appearance turned out to be the straw that broke the Harry’s back. On the radio circuit since morning CHRIS and DEBBIE arrived at the BBC’s Shepherds Bush Studios in the afternoon. I got there when they were in rehearsal. Debbie seemed quite relaxed – messing about with PEELIE, wigless.
Time to get ready – blonde wig and green dress. Couple more interviews to sardine in. Red light time. And they won’t let CHRIS STEIN in the studio! New fire regulations and a Beeb Jobsworth being the reason, so we all have to watch from the observation room miles above the studio.
Debbie don’t find out that her boyfriend isn’t allowed in till near the end of the recording, which includes the video and lots of good-natured banter with PEEL.
She, quite understandably, throws a minor wobbler.

Manager Denny Vosburgh blasts a producer later, who apologises, but, behind her favourite wraparound mirror shades, DEBBIE is obviously pissed off. A nasty taste, they were off home next day to rehearse for the tour, when the big guns will really fly. And so we chart another chapter in the amazing BLONDIE story. War and Peace.
KRIS NEEDS.