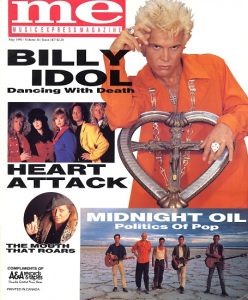 TALES FROM THE BRITE SIDE
By Kerry Doole

When Debbie (now Deborah) Harry appeared in the hit TV show Wiseguy last year as a washed-up pop singer, her performance somehow seemed too painfully real. After all, it came nearly a full decade after Blondie’s brand of post-punk pop sold in the millions, in the process launching Harry as the most photogenic of all the new wavers.
The bulk of the ’80s saw Harry’s former cultural starring role reduced to a series of cameos – a couple of comparatively unsuccessful solo albums, roles in some fringe movies (Videodrome, Union City, Hairspray), a play (Teaneck Tanzi), and songs on a few film soundtracks (American Gigolo, Scarface). Right now, however, Deborah Harry’s on a roll, living out the words of her Wiseguy character’s catchy theme song, “My 20-20’s true, I’m looking on the brite site.”
Ironically, part of Harry’s bright side is Darkside. The just-released Tales From The Darkside: The Movie is a contemporary horro thriller based on stories by Sir Arthur Conan Doyle (who, of course, wrote the Sherlock Holmes mystery novels), Michael McDowell (Beetlejuice), and frightmeister Stephen King, and it marks another step up the acting ladder for Harry.
In an interview prior to the movie’s release, Deborah apologetically explains, “I really can’t tell you very much about it – I don’t want to ruin it straight away! The three stories in the film are linked together by a connecting thread that I provide. I have seen the rushes, and it looks beautiful!”
Ironically, for the third time in a movie, the far from domestic-looking Deborah portrays a housewife. “In Union City, I play a very traditional kind of housewife who likes to keep the place looking nice,” she says. “In Hairspray [John Waters’ wacky comedy] I was a hausfrau, but really more like the proverbial stage mom.
“And in this one, my character lives in Connecticut and drives one of those big Wagoneer station-wagons!” she says enigmatically.
According to the producer of Tales From The Darkside, Richard Rubinstein, “This is a film in the ‘things that go bump in the night’ tradition of scare-moviemaking. Our first objective is to combine great story-telling and acting, and the special visual and make-up effects are meant to embellish the story. I feel that the most popular horror films are ones that present characters the moviegoers can recognize and identify with.”
Rubinstein’s credits show that he is quite familiar with the desires of horror flick devotees. He produced such 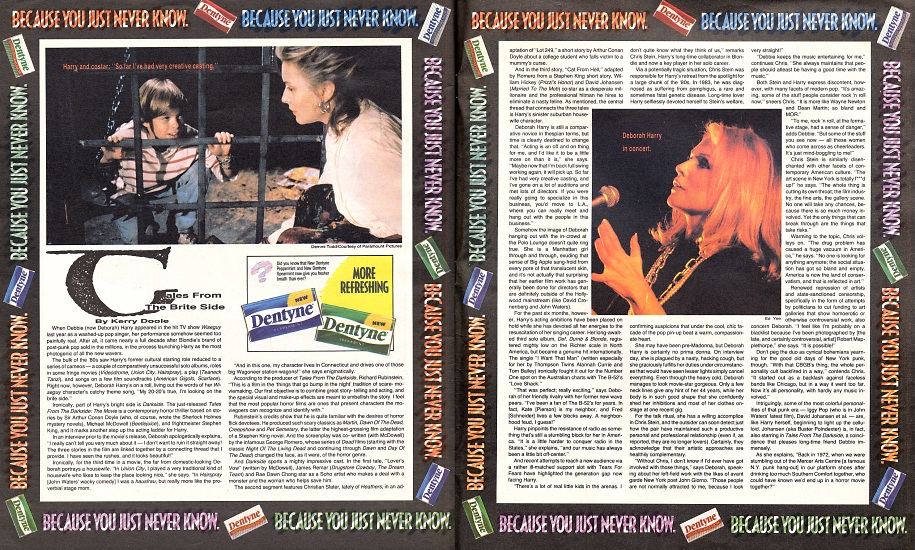 Deborah Harry - Maybe For Sure