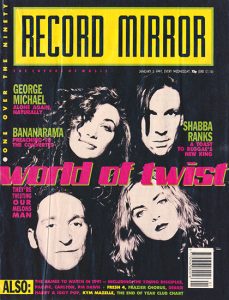 If you caught the ‘Red Hot & Blue’ special on TV last month (and if you didn’t it’s available on video), undoubtedly one of the tracks that stuck firmly in your mind was the contribution of Debbie Harry & Iggy Pop with their OTT version of ‘Well Did You Evah’. 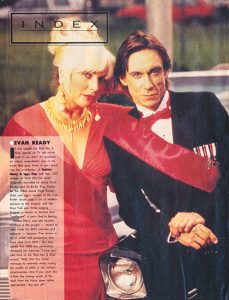 Originally recorded by Uncle Frank Sinatra and Ba-Ba-Ba Bing Crosby for the Fifties movie ‘High Society’, Debs and Iggy’s version of the Cole Porter classic adds a bit of modern sarcasm to the original, with the Non Yoik pair firmly lodging tongues in cheeks to declare how “swellegant” a party they’re having.
Debbie Harry says she became involved in the project – started to raise funds for AIDS charities and research – because “I’ve known a lot of artists and performers who have died from AIDS.” She also admits that AIDS has particularly distressed her because “I love sex!”.
Like most of the ‘Red Hot & Blue’ project, ‘Well, Did You Evah!’ manages to entertain whilst raising the profile of AIDS in the nation’s consciousness, And if you don’t like it then the closing words of the track from Ms Harry seem rather appropriate: “Aw piss off”. 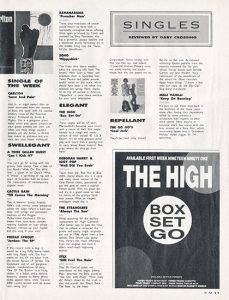 DEBORAH HARRY & IGGY POP
‘Well Did You Evah’
CHRYSALIS
Taken from the ‘Red Hot & Blue’ AIDS charity album, this is a camp and rocky cover version of the Cole Porter classic, guaranteed to get the goat of many a staunch Porter purist. Well it’s great fun and it’s in a good cause to take no notice of the grumpy faced sour pusses. What an elegant, swellegant single this is.