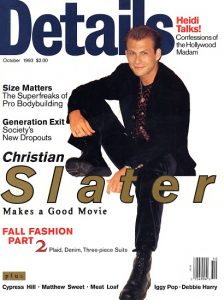 BB: So William Gibson’s written you a song?
DH: Well, we melded two of his poems together on “Dog Star Girl.” I haven’t talked to William, but I think it has to do with Sirius – you know, the star – and there’s a tribe in Africa that says that they’re from that star system. But with Gibson you never know. Musically it has this throbbing thing going on, this tension, and that worked for me.
BB: It’s very spacey and avant-garde.
DH: Our intention was to make an album that was avant-garde and creepy and sort of threatening. But we were met with rejection from the record company. The Big Boys wanted something more “refined” and “commercial.” Basically they thought it sucked.
BB: Hence the title, Debravation. Why does everyone still call you Debbie, not Deborah?
DH: I think there are probably too many letters. My next thing is, the videos are all gonna be called DebraVision.
BB: How would you define DebraVision? 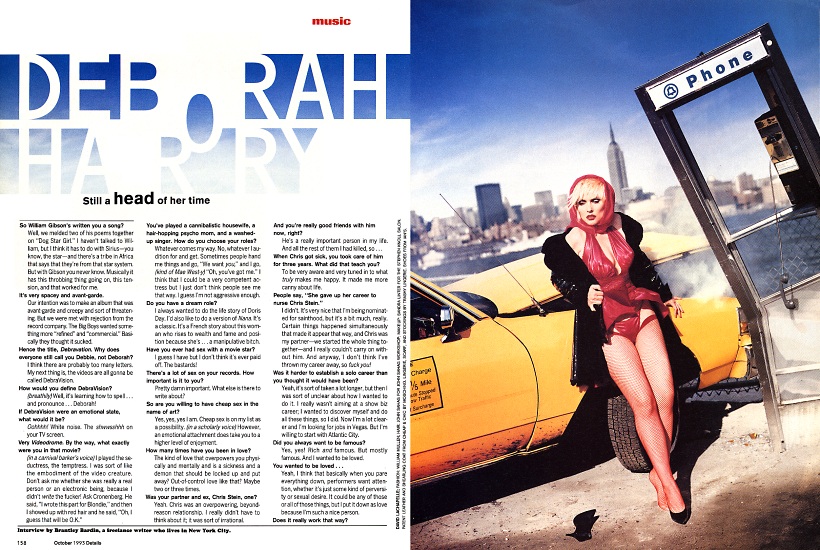 DH: (breathily) Well, it’s learning how to spell… and pronounce… Deborah!
BB: If DebraVision were an emotional state, what would it be?
DH: Oohhhh! White noise. The shwwsshhh on your TV screen.
BB: Very Videodrome. By the way, what exactly were you in that movie?
DH: (in a carnival barker’s voice) I played the seductress, the temptress. I was sort of like the embodiment of the video creature. Don’t ask me whether she was really a real person or an electronic being, because I didn’t write the fucker! Ask Cronenberg. He said, “I wrote this part for Blondie,” and then I showed up with red hair and he said, “Oh, I guess that will be O.K.”
BB: You’ve played a cannibalistic housewife, a hair-hopping psycho mom, and a washed-up singer. How do you choose your roles?
DH: Whatever comes my way. No, whatever I audition for and get. Sometimes people hand me things and go, “We want you,” and I go, (kind of Mae West-y) “Oh, you’ve got me.” I think that I could be a very competent actress but I just don’t think people see me that way. I guess I’m not aggressive enough.
BB: Do you have a dream role?
DH: I always wanted to do the life story of Doris Day. I’d also like to do a version of Nana. It’s a classic. It’s a French story about this woman who rises to wealth and fame and position because she’s… a manipulative bitch.
BB: Have you ever had sex with a movie star?
DH: I guess I have but I don’t think it’s ever paid off. The Bastards!
BB: There’s a lot of sex on your records. How important is it to you?
DH: Pretty damn important. What else is there to write about?
BB: So are you willing to have cheap sex in the name of art?
DH: Yes, yes, yes I am. Cheap sex is on my list as a possibility. (in a scholarly voice) However, an emotional attachment does take you to a higher level of enjoyment.
BB: How many times have you been in love?
DH: The kind of love that overpowers you physically and mentally and is a sickness and a demon that should be locked up and put away? Out-of-control love like that? Maybe two or three times.
BB: Was your partner and ex, Chris Stein, one?
DH: Yeah. Chris was an overpowering, beyond reason relationship. I really didn’t have to think about it; it was sort of irrational.
BB: And you’re really good friends with him now, right?
DH: He’s a really important person in my life. And all the rest of them I had killed, so…
BB: When Chris got sick, you took care of him for three years. What did that teach you?
DH: To be very aware and very tuned in to what truly makes me happy. It made me more canny about life.
BB: People say, “She gave up her career to nurse Chris Stein.”
DH: I didn’t. It’s very nice that I’m being nominated for sainthood, but it’s a bit much, really. Certain things happened simultaneously that made it appear that way, and Chris was my partner – we started the whole thing together – and I really couldn’t carry on without him. And anyway, I don’t think I’ve thrown my career away, so fuck you!
BB: Was it harder to establish a solo career than you thought it would have been? 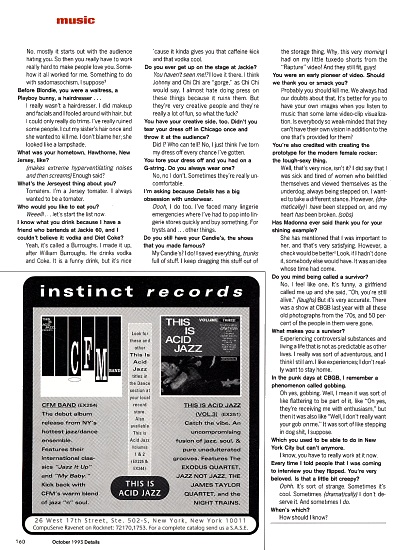