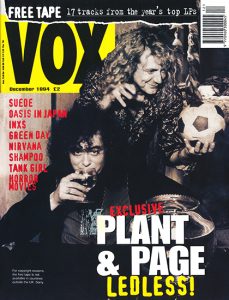 DEBBIE HARRY is rumoured to be talking to promoters about a BLONDIE reunion tour next Spring….

Punch-ups with trannies, bust-ups with her record company… 1994 hasn’t been a wonderful year for Debbie 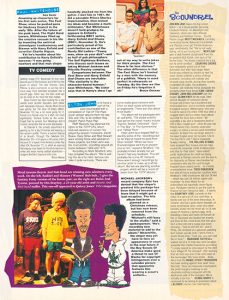 Harry, but at least she can rest on the royalties provided by Blondie’s CD reissues and the forthcoming double-helping retrospective. Fred Dellar provides a run-down of the back catalogue, with a little help from band comments past and present…

BLONDIE
(April 1977)
Private Stock PVLP 1017, reissued on Chrysalis 321165-2
Debbie Harry (vocals), Chris Stein (guitar), Clem Burke (drums), Jimmy Destri (keyboards) and Gary Valentine (bass).
Trash of the lethal but likeable kind, recorded in the wake of some demo sessions masterminded by Alan Betrock, author of Girl Groups. The demos came to the attention of producer Richard Gottehrer, who then cut two tracks – ‘X-Offender’ and ‘In The Flesh’ – and took them to Private Stock Records, which signed the band. The result was this collection of thrills, with Debs, hands on hips, informing the world that she’s for real and not just hawking yet another sample of bimbo bop. A start and a half, but unfortunately the record company went phut…

Debbie Harry: “We did the album with Richard Gottehrer at Plaza Sound. It was a big studio suspended in the superstructure of a building on huge cables – sort of like a floating room. At that time we use to do a Shangri-Las song and so we got Ellie Greenwich, who was their producer and writer, to perform on our album. She did the back-ups on ‘In The Flesh’ and ‘Man Overboard’.”
What did she think about the reaction to the controversial “Wouldn’t you like to rip her to shreds?” poster campaign that accompanied the album’s release? “I imagine that it’s the same as happened to Iggy Pop, in a way. He did things that really upset people and freaked them out. But I think The Slits were more outrageous than me.”

PLASTIC LETTERS
(February 1978)
Chrysalis CHR 1166, reissued on 830793-2*
A new label, a new maturity. The lady was not for spurning – especially in Britain, where ‘Denis’ and ‘(I’m Always Touched By Your) Presence, Dear’ both made the singles chart Top Ten. ‘Denis’ was a cover of a ’60s hit by Randy And The Rainbows.
Bassist Gary Valentine had quit; his immediate replacement was Frank “The Freak” Infante.

Chris Stein: “Our second album was also done in Plaza Sound.”
Debbie: “Again, with Richard Gottehrer producing. But during the six weeks we were in Plaza, he was away for two. A miracle worker as well as a great producer. What’s your favourite song on there?
Chris: “‘Cautious Lip’ – cos that’s the one everybody hates most. I liked that song. That was the big psychedelic number.”
Debbie: “Yeah, but how many hits did we have off that one, two or three?”
Chris: “Just ‘Denis’ was a hit.”
Debbie: “Believe it or not, ‘Denis’ was recorded as a ploy to get American DJs to listen to us, because no one would play our music on US radio. But it took another year and another album before we got that airplay. We had a lot of support in Britain, but at home we were like a cult phenomenon.”

PARALLEL LINES
(September 1978)
Chrysalis CHR 1192, reissued on Fame, CDFA 5382
The breakthrough album, the one that provided ‘Heart Of Glass’, a Number One on both side of the Atlantic. 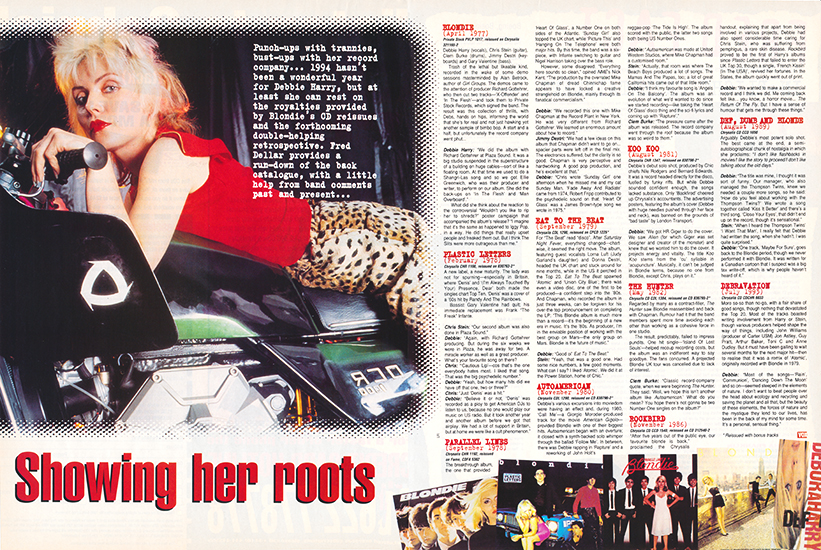 ‘Sunday Girl’ also topped the UK chart, while ‘Picture This’ and ‘Hanging On The Telephone’ were both major hits. By this time, the band was a six-piece, with Infante switching to guitar and Nigel Harrison taking over the bass role.
However, some disagreed: “Everything here sounds so clean,” opined NME’s Nick Kent. “The production by the overrated Mike Chapman of dread Chinnichap fame appears to have locked a creative stranglehold on Blondie, mainly through its fanatical commercialism.”

Debbie: “We recorded this one with Mike Chapman at the Record Plant in New York. He was very different from Richard Gottehrer. We learned an enormous amount about how to record.”
Jimmy Destri: “We had a few ideas on this album that Chapman didn’t want to go on… spacier parts were left off in the final mix. The electronics suffered, but the clarity is so good. Chapman is very perceptive and hardworking. A good pop production, and he’s excellent at that.”
Debbie: “Chris wrote ‘Sunday Girl’ one afternoon when he missed me and my cat Sunday Man. ‘Fade Away And Radiate’ came from 1974, Robert Fripp contributed to the psychedelic sound on that. ‘Heart Of Glass’ was a James Brown-type song we wrote in 1975.”

EAT TO THE BEAT
(September 1979)
Chrysalis CDL 1290, reissued on CPCD 1225*
For “The Beat” read “disco”. After Saturday Night Fever, everything changed – chart-wise, it seemed the right move. The album, featuring guest vocalists Lorna Luft (Judy Garland’s daughter) and Donna Destri, headed the UK chart and stuck around for nine months, while in the US it perched in the Top 20. Eat To The Beat spawned ‘Atomic’ and ‘Union City Blue’; there was even a video disc, one of the first to be produced – a confident step into the ’80s. And Chapman, who recorded the album in just three weeks, can be forgiven for his over-the-top pronouncement on completing the LP: “This Blondie album is much more than a record – it’s the beginning of a new era in music. It’s the ’80s. As producer, I’m in the enviable position of working with the best group on Mars – the only group on Mars. Blondie is the future of music.”

Debbie: “Good ol’ Eat To The Beat.”
Stein: “Yeah, that was a good one. Had some nice numbers, a few good moments. What can I say? I liked ‘Atomic’. We did it at the Power Station, home of Chic.

AUTOAMERICAN
(November 1980)
Chrysalis CDL 1290, reissued CD 830796-2*
Debbie’s various excursions into moviedom were having an effect and, during 1980, ‘Call Me’ – a Giorgio Moroder-produced track for the movie American Gigolo – provided Blondie with one of their biggest hits. Autoamerican began with an overture; it closed with a synth-backed solo whimper through the ballad ‘Follow Me’. In between, there was Debbie rapping in ‘Rapture’ and a reworking of John Holt’s reggae-pop ‘The Tide Is High’. The album scored with the public, the latter two songs both being US Number Ones.

Debbie: “Autoamerican was made at United Western Studios, where Mike Chapman had a customised room.”
Stein: “Actually, that room was where The Beach Boys produced a lot of songs. The Mamas And The Papas, too; a lot of great California hits came out of that little room.”
Debbie: “I think my favourite song is ‘Angels On The Balcony’. The album was an evolution of what we’d wanted to do since we started recording – like taking the ‘Heart Of Glass’ disco thing and the sci-fi lyrics and coming up with ‘Rapture’.”
Clem Burke: “The pressure came after the album was released. The record company went through the roof because the album was so weird to them.”

KOO KOO
(August 1981)
Chrysalis CHR 1347, reissued on 830796-2*
Debbie’s debut solo shot, produced by Chic chiefs Nile Rodgers and Bernard Edwards. It was a record headed directly for the disco, fuelled by funky riffs. But while Debbie sounded confident enough, the songs lacked substance. Only ‘Backfired’ cheered up Chrysalis’s accountants. The advertising posters, featuring the album’s cover (Debbie with huge needles pushed through her face and neck), was banned on the grounds of “bad taste” by London Transport.

Debbie: “We got HR Giger to do the cover. We saw Alien (for which Giger was set designer and creator of the monster) and knew that we wanted him to do the cover. It projects energy and vitality. The title Koo Koo stems from the ‘cu’ syllable in ‘acupuncture’. Musically, it can’t be judged in Blondie terms, because no one from Blondie, except Chris, plays on it.”

THE HUNTER
(May 1982)
Chrysalis CD CDL 1384, reissued on CD 830795-2*
Regarded by many as a contract-filler, The Hunter saw Blondie reassembled and back with Chapman. Rumour had it that the band members spent more time avoiding each other than working as a cohesive force in one studio.
The result, predictably, failed to impress pundits. One hit single – ‘Island Of Lost Souls’ – helped recoup recording costs, but the album was an indifferent way to say goodbye. The fans concurred. A projected Blondie UK tour was cancelled due to lack of interest.

Clem Burke: “Classic record-company quote, when we were beginning The Hunter. They said: ‘Well, we hope this isn’t another album like Autoamerican.’ What do you mean? You hope there’s not gonna be two Number One singles on the album?”

ROCKBIRD
(November 1986)
Chrysalis CD CCD 1540, reissued on CD 312540-2
“After five years out of the public eye, our favourite blonde is back,” proclaimed the Chrysalis handout, explaining that apart from being involved in various projects, Debbie has also spent considerable time caring for Chris Stein, who was suffering from pemphigus, a rare skin disease. Rockbird proved to be the first of Harry’s albums since Plastic Letters that failed to enter the UK Top 30, though a single, ‘French Kissin’ (In The USA)’, revived her fortunes. In the States, the album quickly went out of print.

Debbie: “We wanted to make a commercial record and I think we did. Me coming back felt like… you know, a horror movie… The Return Of The Fly. But I have a sense of humour that gets me through these things.”

DEF, DUMB AND BLONDE
(August 1989)
Chrysalis CD CCD 1650
Arguably Debbie’s most potent solo shot. The best came at the end, a semi-autobiographical chunk of nostalgia in which she proclaims: “I don’t like flashbacks in movies/I like the story to proceed/I don’t like talking about the old days.”

Debbie: “The title was mine, I thought it was sort of funny. Our manager, who also managed the Thompson Twins, knew we needed a couple more songs, so he said: ‘How do you feel about working with the Thompson Twins?’ We wrote a song together called ‘Kiss It Better’ and there’s a third song, ‘Close Your Eyes’, that didn’t end up on the record, though it’s sensational.”
Stein: “When I heard the Thompson Twins’ ‘I Want That Man’, I really felt that Debbie had written the song, when she hadn’t. I was quite surprised.”
Debbie: “One track, ‘Maybe For Sure’, goes back to the Blondie period, though we never performed it with Blondie. It was written for a Canadian cartoon that I suspect was a big tax write-off, which is why people haven’t heard of it.”

DEBRAVATION
(July 1993)
Chrysalis CD CDCHR 6033
More so-so than no-go, with a fair share of good songs, though nothing that devastated the Top 20. Most of the tracks boasted writing involvement from Harry or Stein, though various producers helped shape the way of things, including John Williams (producer of Carter USM) Jon Astley, Guy Pratt, Arthur Baker, Toni C and Anne Dudley. But it must have been galling to wait several months for the next major hit – then to realise that it was a remix of ‘Atomic’, originally recorded with Blondie in 1979.

Debbie: “Most of the songs – ‘Rain’, ‘Communion’, ‘Dancing Down The Moon’ and so on – seemed steeped in the elements of nature. I don’t want to beat people over the head about ecology and recycling and saving the planet and all that, but the beauty of these elements, the forces of nature and the mystique they lend to our lives, has been in the back of my mind for some time. It’s a personal, sensual thing.”