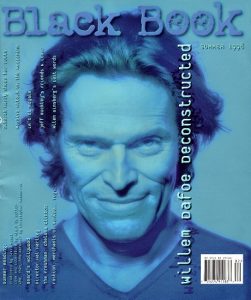 No woman ever took a whipping as elegantly and gracefully as Debbie Harry. That was fifteen years ago in David Cronenberg’s Videodrome with James Woods wielding the party tricks on a strung-up, 37-year-old Harry. The night after, courtesy of your Betamax, you could hear what many at the time thought was her swan song – “Call Me” – blaring from Richard Gere’s Mercedes speakers in American Gigolo. It seemed a tidy end to a career that had begun in earnest with the formation of Blondie in 1975 aside partner Chris Stein. The band broke up in 1984, shortly after the lashings and call-me’s, and that, most people said, was that.
Somehow, without aid of a publicist or any particular high jinks or spiritual testimonies, Ms. Harry has remained in most thinking peoples’ thoughts since then. She has released five solo albums; acted (and this is the appropriate word) in several movies (Hairspray, Drop Dead Rock, New York Stories, Heavy); even done television 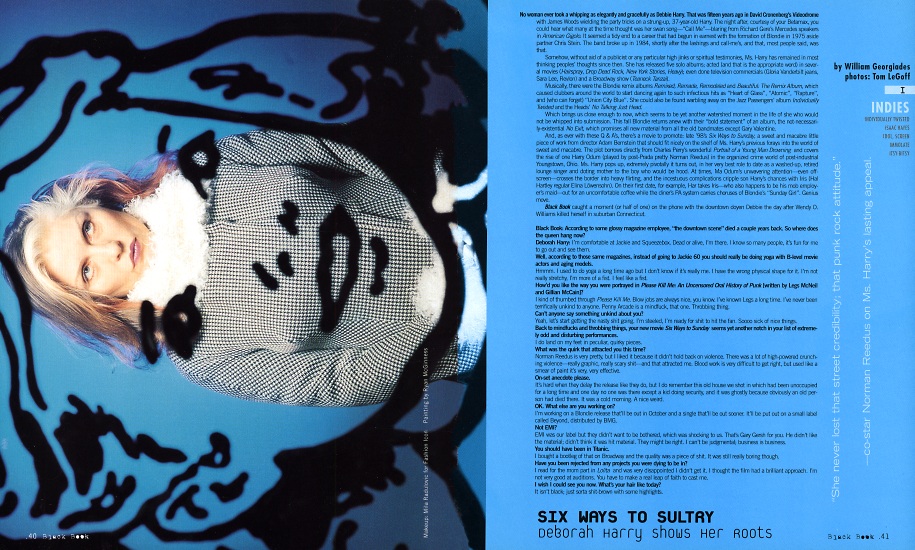 commercials (Gloria Vanderbilt jeans, Sara Lee, Revlon) and a Broadway show (Teaneck Tanzai).
Musically, there were the Blondie remix albums Remixed, Remade, Remodeled and Beautiful: The Remix Album, which caused clubbers around the world to start dancing again to such infectious hits as “Heart of Glass”, “Atomic”, “Rapture”, and (who can forget) “Union City Blue”. She could also be found warbling away on the Jazz Passengers’ album Individually Twisted and the Heads’ No Talking Just Head.
Which brings us close enough to now, which seems to be yet another watershed moment in the life of she who would not be whipped into submission. This fall Blondie returns anew with their “bold statement” of an album, the not-necessarily-existential No Exit, which promises all new material from all the old bandmates except Gary Valentine.
And, as ever with these Q & A’s, there’s a movie to promote: late ’98’s Six Ways to Sunday, a sweet and macabre little piece of work from director Adam Bernstein that should fit nicely on the shelf of Ms. Harry’s previous forays into the world of sweet and macabre. The plot borrows directly from Charles Perry’s wonderful Portrait of a Young Man Drowning and covers the rise of one Harry Odum (played by post-Prada pretty Norman Reedus) in the organized crime world of post-industrial Youngstown, Ohio. Ms. Harry pops up, extremely pivotally it turns out, in her very best role to date as a washed-up, retired lounge singer and doting mother to the boy who would be hood. At times, Ma Odum’s unwavering attention – even off-screen – crosses the border into heavy flirting, and the incestuous complications cripple son Harry’s chances with Iris (Hal Hartley regular Elina Löwensohn). On their first date, for example, Har takes Iris – who also happens to be his mob employer’s maid – out for an uncomfortable coffee while the diner’s PA system carries choruses of Blondie’s “Sunday Girl”. Genius move.

Black Book caught a moment (or half of one) on the phone with the downtown doyen Debbie the day after Wendy O. Williams killed herself in suburban Connecticut.

Black Book: According to some glossy magazine employee, “the downtown scene” died a couple of years back. So where does the queen hang now?
Deborah Harry: I’m comfortable at Jackie and Squeezebox. Dead or alive, I’m there. I know so many people, it’s fun for me to go out and see them.
BB: Well, according to those same magazines, instead of going to Jackie 60 you should really be doing yoga with B-level movie actors and aging models.
DH: Hmmm. I used to do yoga a long time ago but I don’t know if it’s really me. I have the wrong physical shape for it. I’m not really stretchy, I’m more of a fist. I feel like a fist.
BB: How’d you like the way you were portrayed in Please Kill Me: An Uncensored Oral History of Punk [written by Legs McNeil and Gillian McCain]?
DH: I kind of thumbed through Please Kill Me. Blow jobs are always nice, you know. I’ve known Legs a long time. I’ve never been terrifically unkind to anyone. Penny Arcade is a mindfuck, that one. Throbbing thing.
BB: Can’t anyone say something unkind about you?
DH: Yeah, let’s start getting the nasty shit going. I’m steeled, I’m ready for shit to hit the fan. Soooo sick of nice things.
BB: Back to mindfucks and throbbing things, your new movie Six Ways to Sunday seems yet another notch in your list of extremely odd and disturbing performances.
DH: I do land on my feet in peculiar, quirky pieces.
BB: What was the quirk that attracted you this time?
DH: Norman Reedus is very pretty, but I liked it because it didn’t hold back on violence. There was a lot of high-powered crunching violence – really graphic, really scary shit – and that attracted me. Blood work is very difficult to get right, but used like a smear of paint it’s very, very effective.
BB: On-set anecdote please.
DH: It’s hard when they delay the release like they do, but I do remember this old house we shot in which had been unoccupied for a long time and one day no one was there except a kid doing security, and it was ghostly because obviously an old person had died there. It was a cold morning. A nice weird.
BB: OK. What else are you working on?
DH: I’m working on a Blondie release that’ll be out in October and a single that’ll be out sooner. It’ll be put out on a small label called Beyond, distributed by BMG.
BB: Not EMI?
DH: EMI was our label but they didn’t want to be bothered, which was shocking to us. That’s Gary Gersh for you. He didn’t like the material; didn’t think it was hit material. They might be right. I can’t be judgmental; business is business.
BB: You should have been in Titanic.
DH: I bought a bootleg of that on Broadway and the quality was a piece of shit. It was still really boring though.
BB: Have you been rejected from any projects you were dying to be in?
DH: I read for the mom part in Lolita and was very disappointed I didn’t get it. I thought the film had a brilliant approach. I’m not very good at auditions. You have to make a real leap of faith to cast me.
BB: I wish I could see you now. What’s your hair like today?
DH: It isn’t black; just sorta shit-brown with some highlights.