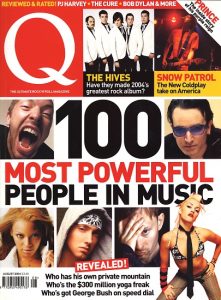 DID YOU SEE Jeremy Vine attempting to interview Deborah Harry? Watching him reduced to a genuflecting adolescent by Ms Blondie’s glacial sneer reminded you that, despite the excessive units shifted in 2004 by various manufactured mock rockettes, blinged-up bunny girls and doe-eyed sensitive singer-songwriters, they simply 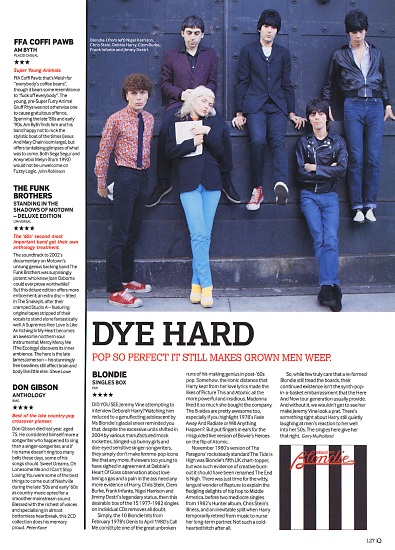 don’t make femme-pop icons like that any more. If viewers too young to have sighed in agreement at Debbie’s Heart Of Glass observation about love being a gas and a pain in the ass need any more evidence of Harry, Chris Stein, Clem Burke, Frank Infante, Nigel Harrison and Jimmy Destri’s legendary status, then this desirable box of the 15 1977-1982 singles on individual CDs removes all doubt.
Simply, the 10 Blondie hits from February 1978’s Denis to April 1980’s Call Me constitute one of the great unbroken runs of hit-making genius in post-’60s pop. Somehow, the ironic distance that Harry kept from her love lyrics made the likes of Picture This and Atomic all the more powerful and insidious. Madonna liked it so much she bought the company. The B-sides are pretty awesome too, especially if you highlight 1978’s Fade Away And Radiate or Will Anything Happen? But put fingers in ears for the misguided live version of Bowie’s Heroes on the flip of Atomic.
November 1980’s version of The Paragons’ rocksteady standard The Tide Is High was Blondie’s fifth UK chart-topper, but was such evidence of creative burn-out it should have been renamed The End Is Nigh. There was just time for the witty, languid wonder of Rapture to explain the fledgling delights of hip hop to Middle America, before two mediocre singles from 1982’s Hunter album, Chris Stein’s illness, and inevitable split when Harry temporarily retired from music to nurse her long-term partner. Not such a cold-hearted bitch after all.
So, while few truly care that a re-formed Blondie still tread the boards, their continued existance isn’t the synth-pop-in-a-basket embarrassment that the Here And Now tour generation usually provide. And without it, we wouldn’t get to see her make Jeremy Vine look a prat. There’s something right about Harry still quietly laughing at men’s reaction to her well into her 50s. The singles here give her that right.

How Blondie had more fun