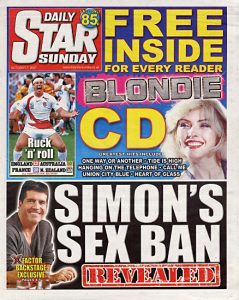 CALL ME…
FOR FREE!

OH yes – it’s Blondie!
The US punk rock pioneers, fronted by the fabulous Debbie Harry, belt out all their biggest hits in our latest free CD.
The 40million selling band are FREE today with your Daily Star Sunday and there’s no fuss or tokens to worry about – it’s in the bag with your take5 mag.
Blondie are the most commercially successful band to emerge from the 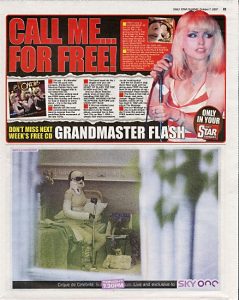 punk/New Wave movement of the late 1970s.
The band boast six No. 1 singles and you can hear a few of them here – HEART OF GLASS, THE TIDE IS HIGH and CALL ME.
And our album features plenty more of their hits – including ONE WAY OR ANOTHER, HANGING ON THE TELEPHONE, RAPTURE and UNION CITY BLUE.
If this has whetted your appetite, check out Blondie’s Live By Request album, recorded live in New York City on May 7, 2004 – simply visit www.recordstore.co.uk/cookingvinyl
And the fun doesn’t stop there! Next week we’ll be giving away FREE the best work of the pioneer of rap – Grandmaster Flash himself.
The Rock & Roll Hall of Famer, real name Joseph “Biggie Grand” Saddler, kicked off hip hop itself in 1982 with his album The Message.
And our message to you is quite simple – don’t miss this amazing FREE musical treat next week!

THAT voice is unmistakable, so just be glad that Debbie Harry isn’t going anywhere. The lead singer for Rock & Roll Hall of Fame inductees Blondie is back with her Eleven Seven Music/ADA debut Necessary Evil, her sixth solo album and first since 1993’s Debravation.
Debbie may be in the Rock & Roll Hall of Fame but she continues to look to the future by pushing herself to expand her art. This is one Necessary Evil that’s, well, necessary… not only for fans, as it turns out, but for Debbie herself. Necessary Evil is released on Tuesday. 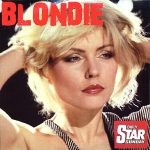 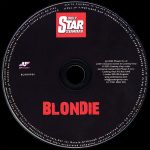 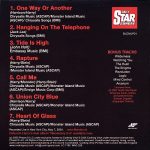