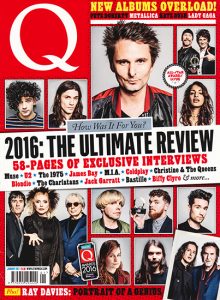 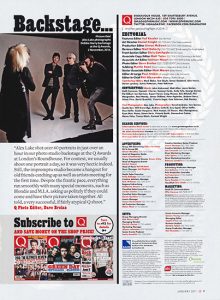 “Alex Lake shot over 60 portraits in just over an hour in our photo studio backstage at the Q Awards at London’s Roundhouse. For context, we usually shoot one portrait a day, so it was very hectic indeed. Still, the impromptu studio became a hangout for old friends catching up as well as artists meeting for the first time. Despite the frantic pace, everything ran smoothly with many special moments, such as Blondie and M.I.A. asking us politely if they could come and have their picture taken together. All told, a very successful, if fairly atypical Q shoot.”
Q Photo Editor, Dave Brolan 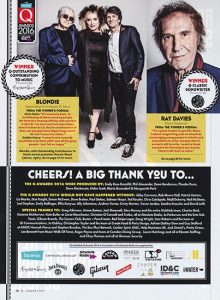 FROM THE WINNER’S PODIUM
Chris Stein: “It’s awesome here. To be following all these amazing people. We have this amazing affinity with our fans in the UK. I’ve been out here more times than I’ve been to LA. But in consideration of that, can you guys have Nigel Farage back? We don’t want him either.”
Debbie Harry: “I wasn’t sure I actually would like to be here until I saw all the great people. I just felt so happy.”

1. PLAY THE FOOL
Chris Stein: My favourite thing that I often tell people is something Debbie told me: “You can never make too big a fool of yourself.” It’s something everyone should take to heart, because some of the most popular people in the world are complete idiots.
Debbie Harry: If you can’t really laugh at yourself, then you’re in really big trouble.

2. DON’T HITCHHIKE (ESPECIALLY WITH SERIAL KILLERS)
DH: Never hitchhike [before joining Blondie, Harry accepted a lift from notorious serial killer Ted Bundy]. I was recently reading Carsick: John Waters Hitchhikes Across America and his adventures were so unbelievable that I walked away wondering if he made the whole thing up. But I would definitely say don’t go hitchhiking. Do I look back and think, “What was I thinking?” No, I knew exactly what I was thinking but I just got lucky.
CS: Well, you got in the fucking car! She got in the fucking car anyway!

3. TRUST NO ONE
CS: What have I learned from being in Blondie for over 40 years? Trust no one! You need your inner circle like the Godfather had. Never tell anybody outside the family your business.

4. DO OR DYE
DH: It did get frustrating when people thought I was Blondie. At one point, I did say to everyone in the band 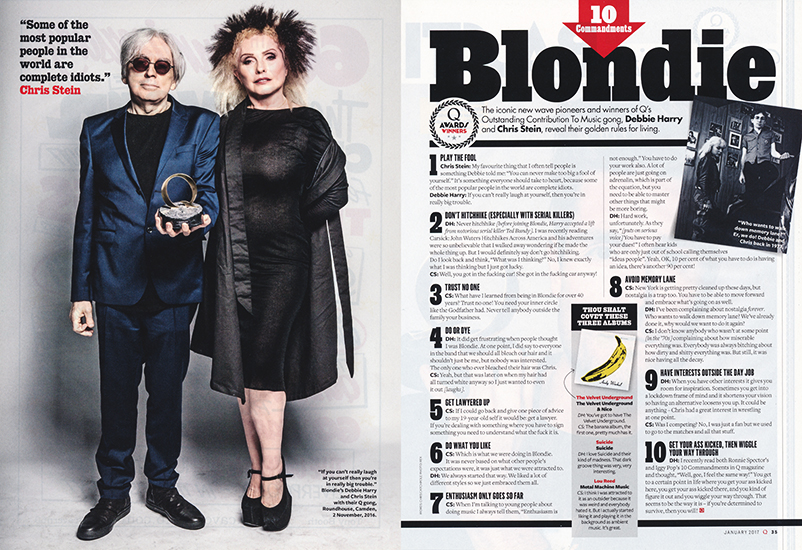 that we should all bleach our hair and it shouldn’t just be me, but nobody was interested. The only one who ever bleached their hair was Chris.
CS: Yeah, but that was later on when my hair had all turned white anyway so I just wanted to even it out [laughs].

5. GET LAWYERED UP
CS: If I could go back and give one piece of advice to my 19-year-old self it would be: get a lawyer. If you’re dealing with something where you have to sign something you need to understand what the fuck it is.

6. DO WHAT YOU LIKE
CS: Which is what we were doing in Blondie. It was never based in what other people’s expectations were, it was just what we were attracted to.
DH: We always started that way. We liked a lot of different styles so we just embraced them all.

7. ENTHUSIASM ONLY GOES SO FAR
CS: When I’m talking to young people about doing music I always tell them, “Enthusiasm is not enough.” You have to do your work also. A lot of people are just going on adrenalin, which is part of the equation, but you need to be able to master other things that might be boring.
DH: Hard work, unfortunately. As they say, “[puts on serious voice] You have to pay your dues!” I often hear kids who are only just out of school calling themselves “ideas people’. Yeah, OK, 10 per cent of what you have to do is having an idea, there’s another 90 per cent!

8. AVOID MEMORY LANE
CS: New York is getting pretty cleaned up these days, but nostalgia is a trap too. You have to be able to move forward and embrace what’s going on as well.
DH: I’ve been complaining about nostalgia forever. Who wants to walk down memory lane? We’ve already done it, why would we want to do it again?
CS: I don’t know anybody who wasn’t at some point [in the ’70s] complaining about how miserable everything was. Everybody was always bitching about how dirty and shitty everything was. But still, it was nice having all the decay.

9. HAVE INTERESTED OUTSIDE THE DAY JOB
DH: When you have other interests it gives you room for inspiration. Sometimes you get into a lockdown frame of mind and it shortens your vision so having an alternative loosens you up. It could be anything – Chris had a great interest in wrestling at one point.
CS: Was I competing? No, I was just a fan but we used to go to the matches and all that stuff.

10. GET YOUR ASS KICKED, THEN WIGGLE YOUR WAY THROUGH
DH: I recently read both Ronnie Spector’s and Iggy Pop’s 10 Commandments in Q magazine and thought, “Well, gee, I feel the same way!” You get to a certain point in life where you get your ass kicked here, you get your ass kicked there, and you kind of figure it out and you wiggle your way through. That seems to be the way it is – if you’re determined to survive, then you will!

THOU SHALT COVET THESE THREE ALBUMS

Suicide
Suicide
DH: I love Suicide and their kind of madness. That dark groove thing was very, very interesting.

Lou Reed
Metal Machine Music
CS: I think I was attracted to it as an outsider because it was weird and everybody hated it. But I actually started liking it and playing it in the background as ambient music. It’s great.