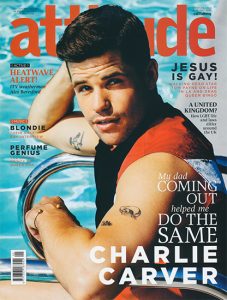 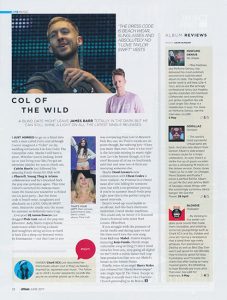 By sticking to the earlier cut-glass punk sound that made them incredible, and enlisting some hot young things such as Charli XCX and Sia, Debbie and crew are having a renaissance that a band their age rarely achieves. Fun and Doom or Destiny as well as Best Day Ever aren’t just good for late Blondie, they’re bloody good full stop. It probably won’t trouble the charts but after losing so many musical giants, it’s refreshing to hear Blondie are more alive than ever. See p68 for interview. 5 May
4/5

DEBBIE HARRY AND CHRIS STEIN FIRST TOPPED THE UK CHARTS IN 1978 AND, DESPITE SOME SETBACKS, THEIR GROUP BLONDIE HAVE REMAINED RELEVANT FOR ALMOST 40 YEARS. AND NOW THEY ARE BACK WITH A NEW ALBUM.

There aren’t many bands – especially ones who trade so heavily in the art of cool – that can rustle up a relevant-sounding album 40 years after they first dominated every chart (and gay dancefloor) on the planet. But that’s exactly what Blondie have done.
Debbie Harry and Chris Stein, aged 71 and 67 respectively, swagger into Attitude’s photoshoot in East London 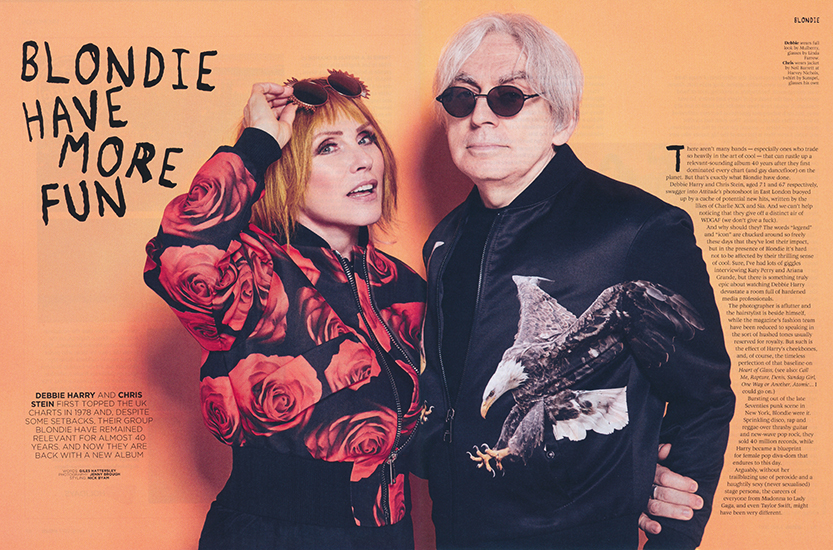 buoyed up by a cache of potential new hits, written by the likes of Charlie XCX and Sia. And we can’t help noticing that they give off a distinct air of WDGAF (we don’t give a fuck).
And why should they? The words “legend” and “icon” are chucked around so freely these days that they’ve lost their impact, but in the presence of Blondie it’s hard not to be affected by their thrilling sense of cool. Sure, I’ve had lots of giggles interviewing Katy Perry and Ariana Grande, but there is something truly epic about watching Debbie Harry devastate a room full of hardened media professionals.
The photographer is aflutter and the hairstylist is beside himself, while the magazine’s fashion team have been reduced to speaking in the sort of hushed tones usually reserved for royalty. But such is the effect of Harry’s cheekbones, and, of course, the timeless perfection of that baseline on Heart of Glass, (see also: Call Me, Rapture, Denis, Sunday Girl, One Way or Another, Atomic… I could go on.)
Bursting out of the late Seventies punk scene in New York, Blondie were it. Sprinkling disco, rap and reggae over thrashy guitar and new-wave pop rock, they sold 40 million records, while Harry became a blueprint for female pop diva-dom that endures to this day.
Arguably, without her trailblazing use of peroxide and a haughtily sexy (never sexualised) stage persona, the careers of everyone from Madonna to Lady Gaga, and even Taylor Swift, might have been very different.
As the Eighties progressed, the white heat of mega fame dimmed – there were battles against drug addiction, illness, toxic management, bankruptcy, a revolving door of band members, and the break-up of Harry and Stein’s 10-year romance. It would have been easy for the band to just slip away, but each subsequent generation becomes enthralled as soon as they discover them. They even had another number one – Maria – around the turn of the millennium, and today Kanye West is just one of the big names who says he’s desperate to work with them. Not bad for a couple of pensioners.
As the shoot wraps, we make our way over to some beaten-up leather sofas in the corner of the studio. The band flew into London for an awards gig the night before, partied late and are still on New York time. Stein is nursing a nasty cold, while Harry is chic but befuddled, jumping up halfway through the interview to cry: “I’m missing my skirt! I’ve just realised my bottom half is quite cold.” 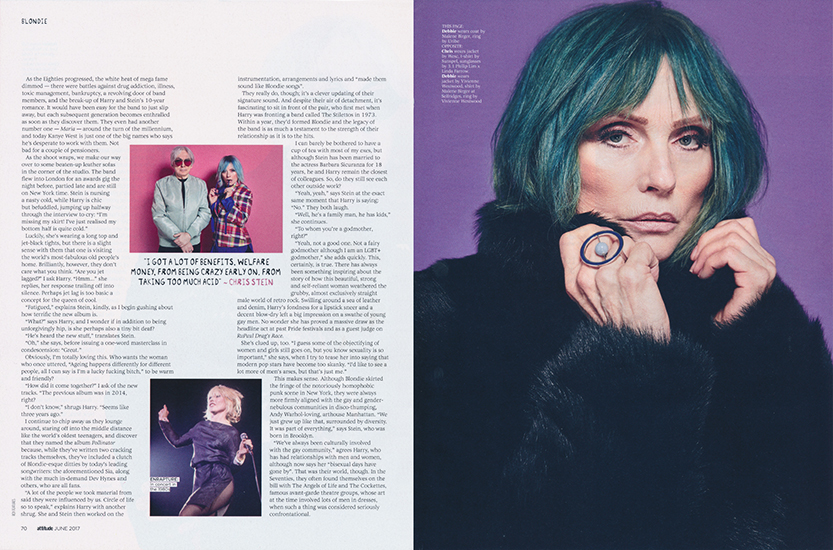 Luckily, she’s wearing a long top and jet-black tights, but there is a slight sense with them that one is visiting the world’s most-fabulous old people’s home. Brilliantly, however, they don’t care what you think. “Are you jet lagged?” I ask Harry. “Hmmm…” she replies, her response trailing off into silence. Perhaps jet lag is too basic a concept for the queen of cool.
“Fatigued,” explains Stein, kindly, as I begin gushing about how terrific the new album is.
“What?” says Harry, and I wonder if in addition to being unforgivingly hip, is she perhaps also a tiny bit deaf?
“He’s heard the new stuff,” translates Stein.
“Oh,” she says, before issuing a one-word masterclass in condescension: “Great.”
Obviously, I’m totally loving this. Who wants the woman who once uttered, “Ageing happens differently for different people, all I can say is I’m a lucky fucking bitch,” to be warm and friendly?
“How did it come together?” I ask of the new tracks. “The previous album was in 2014, right?
“I don’t know,” shrugs Harry. “Seems like three years ago.”
I continue to chip away as they lounge around, staring off into the middle distance like the world’s oldest teenagers, and discover that they names the album Pollinator because, while they’ve written two cracking tracks themselves, they’ve included a clutch of Blondie-esque ditties by today’s leading songwriters: the aforementioned Sia, along with the much in-demand Dev Hynes and others, who are all fans.
“A lot of the people we took material from said they were influenced by us. Circle of life so to speak,” explains Harry with another shrug. She and Stein then worked on the instrumentation, arrangements and lyrics and “made them sound like Blondie songs”.
They really do, though; it’s a clever updating of their signature sound. And despite their air of detachment, it’s fascinating to sit in front of the pair, who first met when Harry was fronting a band called The Stilettos in 1973. Within a year, they’d formed Blondie and the legacy of the band is as much a testament to the strength of their relationship as it is to the hits.
I can barely be bothered to have a cup of tea with most of my exes, but although Stein has been married to the actress Barbara Sicuranza for 18 years, he and Harry remain the closest of colleagues. So, do they still see each other outside work?
“Yeah, yeah,” says Stein at the exact same moment that Harry is saying: “No.” They both laugh.
“Well, he’s a family man, he has kids,” she continues.
“To whom you’re a godmother, right?”
“Yeah, not a good one. Not a fairy godmother although I am an LGBT+ godmother,” she adds quickly. This, certainly is true. There has always been something inspiring about the story of how this beautiful, strong and self-reliant woman weathered the grubby, almost exclusively straight male world of retro rock. Swilling around a sea 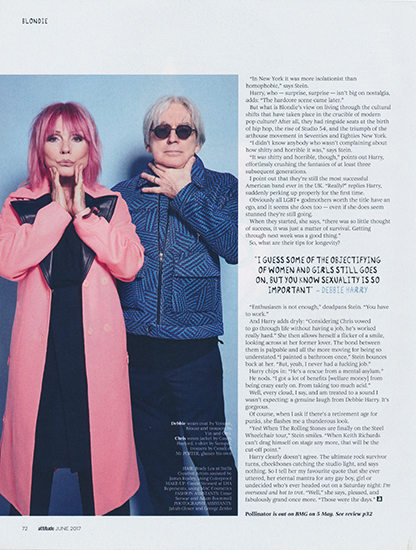 of leather and denim, Harry’s fondness for a lipstick sneer and a decent blow-dry left a big impression on a swathe of young gay men. No wonder she has proved a massive draw as the headline act at past Pride festivals and as a guest judge on RuPaul’s Drag Race.
She’s clued up, too. “I guess some of the objectifying of women and girls still goes on, but you know sexuality is so important,” she says, when I try to tease her into saying that modern pop stars have become too skanky. “I’d like to see a lot more men’s arses, but that’s just me.”
This makes sense. Although Blondie skirted the fringe of the notoriously homophobic punk scene in New York, they were always more firmly aligned with the gay and gender-nebulous communities in disco-thumping, Andy Warhol-loving, arthouse Manhattan. “We just grew up like that, surrounded by diversity. It was part of everything,” says Stein, who was born in Brooklyn.
“We’ve always been culturally involved with the gay community,” agrees Harry, who has had relationships with men and women, although now says her “bisexual days have gone by”. That was their world, though. In the Seventies, they often found themselves on the bill with The Angels of Life and The Cockettes, famous avant-garde theatre groups, whose art at the time involved lots of men in dresses, when such a thing was considered seriously confrontational.
“In New York it was more isolationist than homophobic,” says Stein.
Harry, who – surprise, surprise – isn’t big on nostalgia, adds: “The hardcore scene came later.”
But what is Blondie’s view on living through the cultural shifts that have taken place in the crucible of modern pop culture? After all, they had ringside seats at the birth of hip hop, the rise of Studio 54, and the triumph of the arthouse movement in Seventies and Eighties New York.
“I didn’t know anybody who wasn’t complaining about how shitty and horrible it was,” says Stein.
“It was shitty and horrible, though,” points out Harry, effortlessly crushing the fantasies of at least three subsequent generations.
I point out that they’re still the most successful American band ever in the UK. “Really?” replies Harry, suddenly perking up properly for the first time.
Obviously all LGBT+ godmothers worth the title have an ego, and it seems she does too – even if she does seem stunned they’re still going.
When they started, she says, “there was so little thought of success, it was just a matter of survival. Getting through next week was a good thing.”
So, what are their tips for longevity?
“Enthusiasm is not enough,” deadpans Stein. “You have to work.”
And Harry adds dryly: “Considering Chris vowed to go through life without having a job, he’s worked really hard.” She then allows herself a flicker of a smile, looking across at her former lover. The bond between them is palpable and all the more moving for being so understated. “I painted a bathroom once,” Stein bounces back at her. “But, yeah, I never had a fucking job.”
Harry chips in: “He’s a rescue from a mental asylum.”
He nods. “I got a lot of benefits [welfare money] from being crazy early on. From taking too much acid.”
Well, every cloud, I say, and am treated to a sound I wasn’t expecting: a genuine laugh from Debbie Harry. It’s gorgeous.
Of course, when I ask if there’s a retirement age for punks, she flashes me a thunderous look.
“Yes! When The Rolling Stones are finally on the Steel Wheelchair tour,” Stein smiles. “When Keith Richards can’t drag himself on stage any more, that will be the cut-off point.”
Harry clearly doesn’t agree. The ultimate rock survivor turns, cheekbones catching the studio light, and says nothing. So I tell her my favourite quote that she ever uttered, her eternal mantra for any gay boy, girl or undecided who’s ever headed out on a Saturday night: I’m oversexed and hot to trot. “Well,” she says, pleased, and fabulously grand once more. “Those were the days.”

Pollinator is out on BMG on 5 May. See review p32

Tonight At The London Palladium