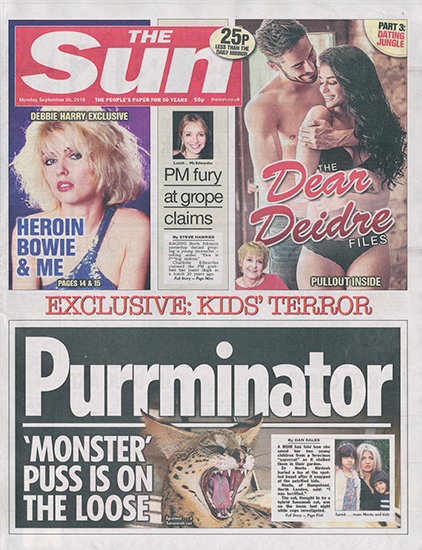 EXCLUSIVE: BLONDIE ON HER RIOTOUS, RAUNCHY RISE TO STARDOM

Fame was like sex… but nothing was better than heroin. Nothing.

IN 1974 Debbie Harry and guitarist Chris Stein, her lover, left their previous band The Stilettoes and formed Blondie – the name inspired by the truck drivers who would catcall, “Hey, Blondie!” at platinum-haired Debbie as she walked by.
The band became regulars at legendary New York club CBGB’s and started to make a name for themselves.
Here, in exclusive extracts from her new book, Harry recalls Blondie’s meteroric rise to the top – and the sex, drugs and rock’n’roll along the way…

FAME was a sensual sort of feeling, initially.
It felt like having sex, a wash of electricity coursing through your fingers and your legs, sometimes a flushed feeling at the base of your throat. It was exciting. but at the same time strangely anticlimactic.
I’ve come to the conclusion that for me, the best of Blondie was the early days of the band, when we were struggling artists scuttling around New York’s Lower East Side just trying to get something going. Everybody got by on no money. Nobody talked about mainstream success. Who wanted to be mainstream? What we were doing was so much better than that.
Blondie had become a recognisable name in some small way but nobody in the music business was looking at us. Chris was on welfare, I was a bikini bartender in the financial district and we occasionally sold some pot to make a few bucks. At this point Blondie was an underdog, way down at the bottom of the heap.
CBGB’s, at 315 Bowery, has become a legend, but in those days it was a dive bar on the ground floor of one of the many flophouses that lined the avenue.
We played CBGB’s every weekend for seven months straight. We didn’t make money, we got paid in beers.
You were lucky if they were charging two dollars at the door.
The crowd was almost all our friends, all the other bands, downtown artists and freaks.
It was an immediate, smaller, tighter, more private world then. Everybody on the scene did drugs. That’s how it 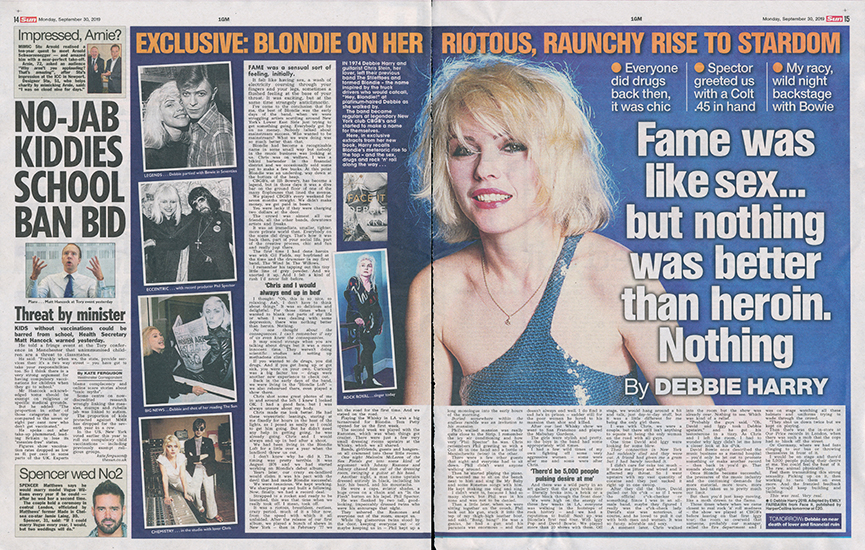 was back then, part of your social life, part of the creative process, chic and fun and really just there.
The first time I had done heroin was with Gil Fields, my boyfriend at the time and the drummer in my first band, The Wind In The Willows.
I remember his tapping out this tiny little line of grey powder. And we snorted it up. And I felt a kind of rush I’d never felt before.

‘Chris and I would always end up in bed’
I thought: “Oh, this is so nice, so relaxing. Aah, I don’t have to think about things.” It was so delicious and delightful. For those times when I wanted to blank out parts of my life or when I was dealing with some depression, there was nothing better than heroin. Nothing.
No one thought about the consequences. I can’t remember if any of us even knew the consequences.
It may sound strange when you are talking about drugs but it was a more innocent time. They weren’t doing scientific studies and setting up methadone clinics.
If you wanted to do drugs, you did drugs. And if you got hung up or got sick, you were on your own. Curiosity was a big factor too – drugs were another new experience to check out.
Back in the early days of the band, we were living in the “Blondie Loft” – we also rehearsed there, even played a show there.
Chris shot some great photos of me in and around the loft. I knew I looked OK. I had a good face, but I was always unsure about my body.
Chris made me look better. He had these voyeuristic leanings, staring at me fixedly for hours in the heat of the lights, as I posed as sexily as I could to get him going. But he didn’t need any help in getting going, he was already going. Chris and I would always end up in bed after a shoot.
We had been living in the Blondie Loft for a little over a year when the landlord threw us out.
I don’t know why he did it. The timing was pretty terrible. It was August 1976 and we had started working on Blondie’s debut album.
Years later, our crazy ex-landlord would claim it was his pact with the devil that had made Blondie successful.
We were tenacious. We kept working. We sharpened up and built a following. Now, finally, we had a record deal.
Strapped to a rocket and ready to be launched, this was that time when we really took off. I mean, took off.
It was a riotous, breathless, restless, crazy period, much of it a blur now, from the speed with which it all unfolded. After the release of our first album, we played a bunch of shows in New York – then in February ’77 we hit the road for the first time. And we stayed on the road.
Playing the Whisky in LA was a big turnaround for Blondie. Tom Petty open for us the first week.
The second week we played with the Ramones, which was when things got crazier. There were just a few very small dressing rooms upstairs at the Whisky, which we all shared.
Bands, girlfriends, guests and hangers-on all crammed into these little rooms.
One night Malcolm McLaren of the Sex Pistols got into some kind of argument with Johnny Ramone and Johnny chased him out of the dressing room, swinging a guitar at his head.
Another night, a man came upstairs dressed entirely in black, including his hair, beard, and his moustache.
He wore a cape, aviator shades, a huge cross on a chain and an “In the Flesh” button on his lapel. Phil Spector.
He was flanked by two tall, good-looking, impeccably dressed twins who were his entourage that night.
They ushered the Ramones, and everyone out of the room, except us.
While the glamorous twins stood by the door, keeping everyone out – or maybe keeping us in – Phil kept up a long monologue into the early hours of the morning.
Buried somewhere within the endless ramble was an invitation to his mansion.
Phil’s walled mansion was really quite close to the Strip. I remember the icy air conditioning and how very “Phil Spector” he was. Chris remembers Phil greeting us with a Colt 45 in one hand and a bottle of Manischewitz (wine) in the other.
There are a few other guests that night and everyone had to sit down. Phil didn’t want anyone walking around.
Then he started playing the piano. He wanted me to sit on the bench next to him and sing Be My Baby and some Ronettes songs with him. He kept making me sing and sing.
I didn’t want to, because I had so many shows, but Phil was in his zone and was not to be denied.
Then a little later, when we were sitting together on the couch, Phil took out his gun, stuck it into the top of my thigh-high leather boot, and said, “Bang, bang!” He was a genius, he had a gun and his paranoia was enormous – and that doesn’t always end well. I do find it sad he’s in prison – sadder still for the poor woman he lured to his mansion then shot and killed.
After our last Whisky show we went to San Francisco and played the Mabuhay Gardens.
The girls were stylish and pretty, so the boys in the band had some appropriately wild times.
I had a few wild times of my own fighting off some very aggressive women – some were after me and some were after Chris.

‘There’d be 5,000 people pulsing desire at me’
And there was a wild party in an art gallery that the guys broke into – literally broke into, a brick or a cinder block through the front door.
We were high on the energy of those few weeks in LA, everyone was walking in the footsteps of rock history – and we had a reputation to build! Next up was Blondie’s first real tour. With Iggy Pop and David Bowie. We played more than 20 shows with them. Off stage we would hang around a bit and talk, just day-to-day stuff, but it was a little different for me being the only girl there.
I was with Chris, we were a couple, but there still isn’t anything to equate to being the only woman on the road with all the guys.
One time David and Iggy were looking for some blow.
Their connection in New York had suddenly died and they were out. A friend had given me a gram but I had barely touched it.
I didn’t care for coke too much – it made me jittery and wired and it affected my throat. So I went upstairs with my vast quantity of cocaine and they just sucked it right up in one swoop.
After they did the blow, David pulled out his c*ck – as if I were the official c*ck-checker or something. Since I was in an all-male band, maybe they figured I really was the c*ck-check lady. David’s size was notorious, of course, and he loved to pull it out with both men and women. It was so funny, adorable and sexy.
A moment later, Chris walked into the room but the show was already over. Nothing to see. Which was kind of a relief.
“Probably the guys said, “Oh, David and Iggy took Debbie upstairs,” and he got his testosterone in a tizzy. As Chris and I left the room, I had to wonder why Iggy didn’t let me have a closer look at his d*ck.
David Bowie once described the music business as a mental hospital – you’d only be let out to promote something or make another record – then back in you’d go. That sounds about right.
Once Blondie became successful, the pressures of the music industry and the continuing demands for more material, more tours, more press had taken us to pretty much our limit.
But then you’d just keep moving, like a moth drawn to the flame.
Those times where we came closest to real rock’n’roll madness – the show we played at CBGB’s before leaving on that first Iggy tour; the room so oversold that someone, probably our manager, called the fire department and I was on stage watching all these helmets and uniforms trying to wade through the crowd.
“They shut us down twice but we kept on playing.
Then there was the in-store at Our Price records in London, when there was such a mob that the cops had to block off the street.
Or Germany, where we had fans clinging to our tour bus or throwing themselves in front of it.
I would be on stage and there’d be 5,000 people pulsing their desire at me. You could feel the heat of it. The raw, animal physicality.
Feel them transmitting this strong sexuality. Picking up on it, then working to turn them on even more. And the frenzied feedback cycle would keep building and building.
This was real. Very real.

Debbie Harry 2019. Adapted by EMILY FAIRBAIRN from Face It, published by HarperCollins tomorrow at £20

Debbie Harry of Blondie opens up in new memoir, ‘Face It’ | GMA