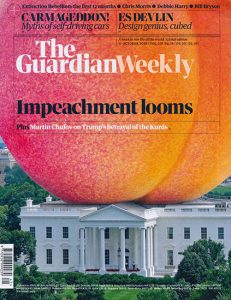 IT WAS A GAS

She survived heroin, rape and bankruptcy – but despite the lows, Debbie Harry’s life in pop has hit epic heights. Which is why she feels so lucky…

It wasn’t until she was 31 – relatively old by pop-star standards – that Debbie Harry became famous. This goes some way to explain how she managed to cram in so much before she became the superstar front-woman of Blondie. To name but a few of her experiences, as a child, she survived being in a coma as a result of pneumonia; as a young woman in New York, she worked for the BBC, hung out with Andy Warhol and other New York faces, escaped an abusive relationship, was raped, became a driver for the New York Dolls, started a girl band and formed Blondie. “I’m sure I don’t have all my experiences on tap,” Harry writes in her new autobiography, Face It.
She seems to have stories about everything, which makes Face It an often very funny read. Was it something difficult looking back? Harry is 74, and has been through some traumatic events. “Sometimes, yeah. It wasn’t something…” She pauses. “I tend to move on, get interested in something and see what’s about. I guess there were moments when I thought: ‘God, you were such a fool.’ You look back, and you think about all the mistakes you made: ‘Why did I ever do that?'” She smiles. “But, all in all, I guess I’ve been very lucky.”
Her biggest mistake, she says, was money. “That I didn’t pay more attention to business, and that I was really only interested in making music and performing.”
In the early 80s, Harry and Chris Stein, her Blondie bandmate and former partner, lost everything. Their debut album, the eponymous Blondie, came out in 1976, and for years they toured the world, had hit singles, including Heart of Glass and Call Me, and sold 40m records. When the US Internal Revenue Service hit them with a huge 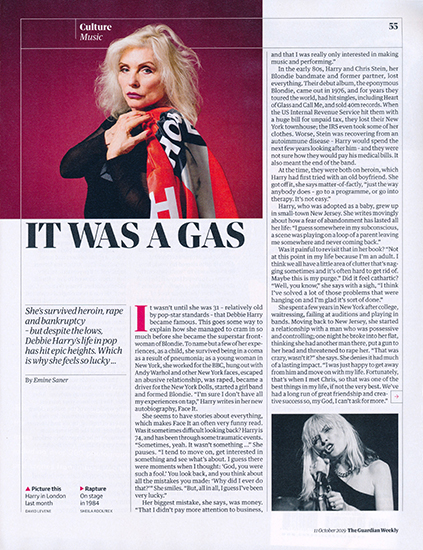 bill for unpaid tax, they lost their New York townhouse; the IRS even took some of her clothes. Worse, Stein was recovering from an autoimmune disease – Harry would spend the next few years looking after him – and they were not sure how they would pay his medical bills. It also meant the end of the band.
At the time, they were both on heroin, which Harry had first tried with an old boyfriend. She got off it, she says matter-of-factly, “just the way anybody does – go to a programme, or go into therapy. It’s not easy.”
Harry, who was adopted as a baby, grew up in small-town New Jersey. She writes movingly about how a fear of abandonment has lasted all her life: “I guess somewhere in my subconscious, a scene was playing on a loop of a parent leaving me somewhere and never coming back.”
Was it painful to revisit that in her book? “Not at this point in my life because I’m an adult. I think we all have a little area of clutter that’s nagging sometimes and it’s often hard to get rid of. Maybe this is my purge.” Did it feel cathartic? “Well, you know,” she says with a sigh, “I think I’ve solved a lot of those problems that were hanging on and I’m glad it’s sort of done.”
She spent a few years in New York after college, waitressing, failing at auditions and playing in bands. Moving back to New Jersey, she started a relationship with a man who was possessive and controlling; one night he broke into her flat, thinking she had another man there, put a gun to her head and threatened to rape her. “That was crazy, wasn’t it?” she says. She denies it had much of a lasting impact. “I was just happy to get away from him and move on with my life. Fortunately, that’s when I met Chris, so that was one of the best things in my life, if not the very best. We’ve had a long run of great friendship and creative success so, my God, I can’t ask for more.”
Few women have been objectified as much as Harry. Her face is immortalised on Blondie album covers and in 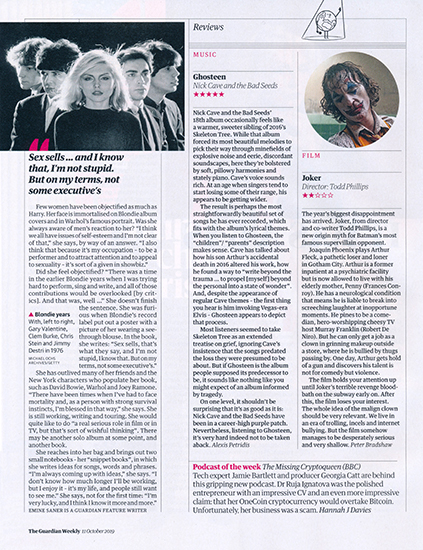 Warhol’s famous portrait. Was she always aware of men’s reaction to her? “I think we all have issues of self-esteem and I’m not clear of that,” she says, by way of an answer. “I also think that because it’s my occupation – to be a performer and to attract attention and to appeal to sexuality – it’s sort of a given in showbiz.”
Did she feel objectified? “There was a time in the earlier Blondie years when I was trying hard to perform, sing and write, and all of those contributions would be overlooked [by critics]. And that was, well…” She doesn’t finish the sentence. She was furious when Blondie’s record label put out a poster with a picture of her wearing a see-through blouse. In the book, she writes: “Sex sells, that’s what they say, and I’m not stupid, I know that. But on my terms, not some executive’s.”
She has outlived many of her friends and the New York characters who populate her book, such as David Bowie, Warhol and Joey Ramone. “There have been times when I’ve had to face mortality and, as a person with string survival instincts, I’m blessed in that way,” she says. She is still working, writing and touring. She would quite like to do “a real serious role in film or in TV, but that’s sort of wishful thinking”. There may be another solo album at some point, and another book.
She reaches into her bag and brings out two small notebooks – her “snippet books:, in which she writes ideas for songs, words and phrases. “I’m always coming up with ideas,” she says. “I don’t know how much longer I’ll be working, but I enjoy it – it’s my life, and people still want to see me.” She says, not for the first time: “I’m very lucky, and I think I know it more and more.”

Face It by Debbie Harry - An Inside Look