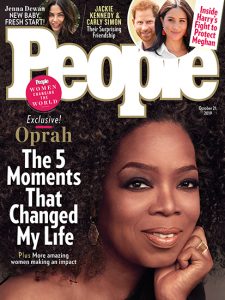 My Life in Pictures

IN HER MEMOIR FACE IT, THE BLONDIE SINGER LOOKS BACK AT HER REBELLIOUS ROAD TO ROCK STARDOM
By JORDAN RUNTAGH

[PHOTO – Queen of Rock – “It’s what everybody dreams of when they start a band – thousands of cheering fans wanting you,” says Harry (above, in 1977) of performing with Blondie.] [PHOTO – Little Debbie – Raised in New Jersey, Harry (ca. 1950s) says she “had a rich fantasy life. I was often caught daydreaming and yelled at to come back to reality.”] 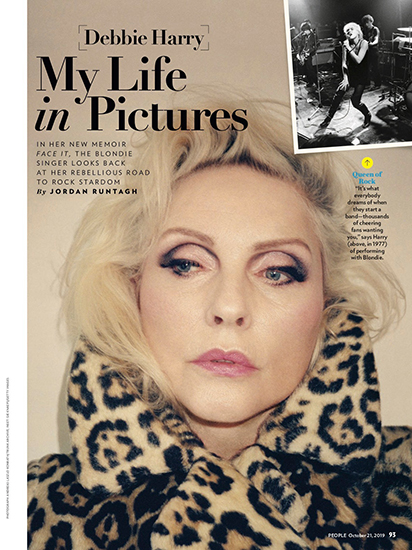 [PHOTO – Bunny Business – Harry briefly worked at the Playboy Club in 1969. In her memoir, she says the gig required “a lot of training.”] [PHOTO – Breakthrough – The success of 1978’s Parallel Lines came with a price. “We worked constantly,” says Harry.] [PHOTO – Blondie and Bowie – “David showed me how to work angles and lights,” Harry says of her 1977 tour with Bowie and Iggy Pop.] [PHOTO – Cool Couple – Harry met Blondie cofounder Chris Stein (at home in 1980) while playing with an early band. “He came backstage to say hello.”] [PHOTO – Downtown Heroes – “New York is a benevolent environment for artists,” says Harry (at the storied Chelsea Hotel in 1979 with Blondie, from left: Clem Burke, Nigel Harrison, Jimmy Destri, Frank Infante and Stein).] [PHOTO – Style Setter – “The only thing that’s mine are the shoes,” Harry says of this punk look, from a 1976 photo shoot by Stein.] 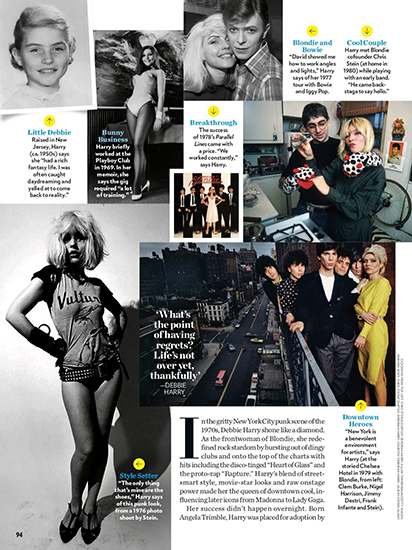 In the gritty New York City punk scene of the 1970s, Debbie Harry shone like a diamond. As the frontwoman of Blondie, she redefined rock stardom by bursting out of dingy clubs and onto the top of the charts with hits including the disco-tinged “Heart of Glass’ and the proto-rap “Rapture.” Harry’s blend of street-smart style,
movie-star looks and raw onstage power made her the queen of downtown cool, influencing later icons from Madonna to Lady Gaga.
Her success didn’t happen overnight. Born Angela Trimble, Harry was placed for adoption by her unwed mother and renamed by her adoptive family in Hawthorne, N.J., where she had an idyllic childhood. “It was great. I had a yard to play in, and there were little farms in town,” she says. After college she was lured by the call of nearby New York City, where she waitressed and worked on her music. In 1974 she and her guitarist boyfriend Chris Stein formed Blondie (named after the catcall she often heard on the streets). Their romance didn’t last, but the music endures. Now 74, Harry 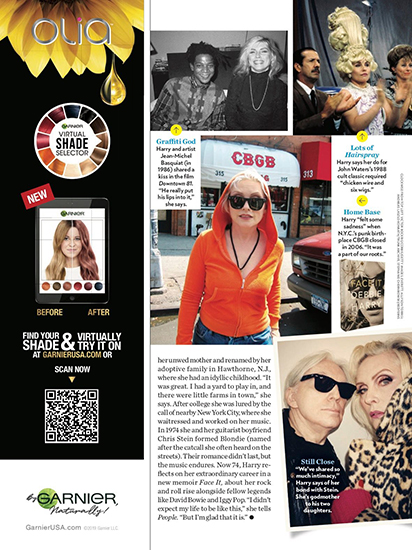 reflects on her extraordinary career in a new memoir Face It, about her rock and roll rise alongside fellow legends like David Bowie and Iggy Pop. “I didn’t expect my life to be like this,” she tells People. “But I’m glad that it is.”

[PHOTO – Graffiti God – Harry and artist Jean-Michel Basquiat (in 1986) shared a kiss in the film
Downtown 81. “He really put his lips into it,” she says.]