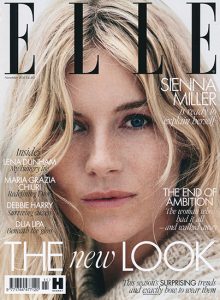 THE LIFE AND (good) TIMES OF DEBBIE HARRY

FOR 40 YEARS, SHE HAS been ONE OF OUR most ENIGMATIC CULTURAL FIGURES.
HERE, FOR THE FIRST TIME, SHE OPENS UP

It’s late afternoon on a blistering day in the Chelsea art district of New York, and Debbie Harry is taking a breather, munching on a bowl of fruit. She’s had a full day, rehearsing for an upcoming tour with her long-time band Blondie. Dressed in a white T-shirt printed with the word SELFIE and a pair of shades firmly planted on her face, she speaks exactly as you’d expect tough New York legends to talk: straight to the point, a little deadpan, with a slight twang picked up from a New Jersey childhood.
In her youth, Harry was part of the downtown Manhattan world of avant-garde art and punk in the 1970s – the hippest women in the hippest era of the hippest city on earth. She and her artistic/romantic partner Chris Stein married that sophistication with mass appeal in Blondie, through songs like Heart of Glass and Call Me, both of which she co-wrote. Her music is embedded in the fabric of pop culture, inescapable in bars and karaoke joints all over the US. 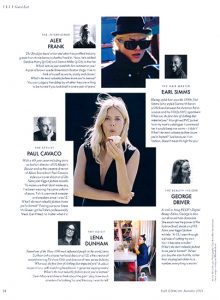 Yet, despite her music’s omnipresence, Harry has always excelled at the mostly lost art of mystique. That is to say, she keeps her private life private. But now, on releasing her first memoir, Face It, she feels ready to share her history. And what a history: given up for adoption as a baby, she struck out on her own to New York in the 1960s, making her way to the Lower East Side.
She broke down musical barriers by blending new wave with punk with pop with disco, made friends with Andy Warhol and was painted by him, bought Jean-Michel Basquiat’s first sale of a painting for US $300 (£250), acted in John Waters’ Hairspray, and released the first song that featured a rap verse (which she rapped) to reach number one in the Billboard charts, Rapture. All while selling around 40 million albums along the way. It hasn’t all been easy – she battled drug addiction – but hearing her story she makes you wonder if the world could ever be as fun as the one she grew up in.
In a backroom of the rehearsal space, she takes off her sunglasses, fixes her lucent blue eyes into a hard gaze, and tells her story…

Going blonde
‘I was 15 when I dyed my hair platinum. I felt drawn to Marilyn Monroe. She had a big effect on women and was such a magnetic character. Having come up through the era of misogyny, I felt she had been misunderstood and undervalued. That meant something to me in my innocence. As far as becoming the ‘Blondie’ character, I think it helped me as a performer to disengage from any frailties and embody a women I admire.’

Moving to the city
‘My dream was to live in New York City and become a beatnik. I was commuting to my job on Fifth Avenue from New Jersey, and I hated it. My boss was a nice Ukrainian woman. I told her: “I’m looking for an apartment, but I 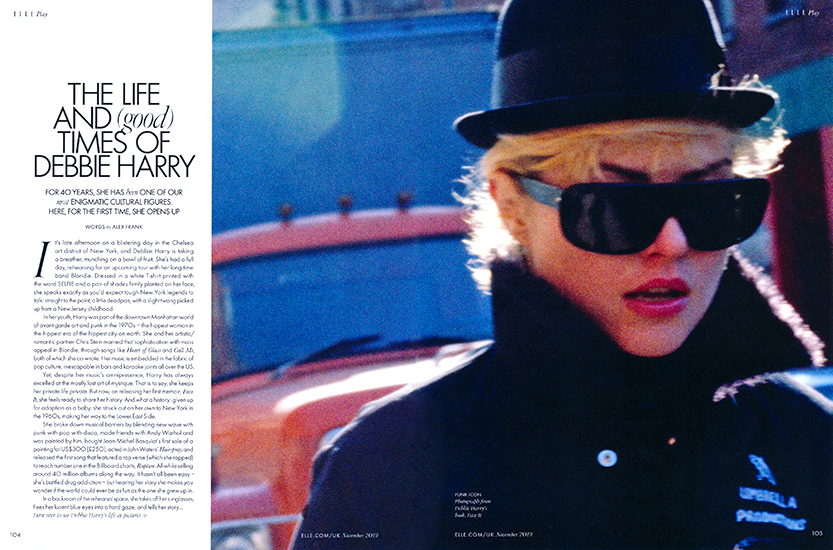 can’t afford it.” She said, “Haven’t you heard of the Lower East Side?” I ended up on St Marks Place [in Manhattan’s East Village]; my rent was $64 a month in 1965. It was an exciting period, a creative mecca.
Poets like Allen Ginsberg and Gregory Corso walked around. And, of course, Andy Warhol was a big presence.’

Searching for roots
‘I was always curious to find my biological parents. When I was told [I was adopted] at age four, I was surprised, but I didn’t think on it. Then it became a part of my conscience, but the laws forbade any connection. Recently the laws changed – I thought, ‘I’m not getting younger and if I don’t initiate some kind of discovery, I’ll never know’.

Sharing her stories
‘I still love doing music. I think the most memorable thing is when [a fan] says, “Oh gosh, your music helped me get through a rough patch.” And I think, Oh sh*t, that happens to me when I listen to The Velvet Underground. It’s all about the music for me. I’m not really super public, so writing this book [Face It] has been a little bit revealing for me. I guess I come from a different era. But I’m getting used to the idea that I can live with my past as the person that I am now. Perhaps I do have a lot of stories to tell, after all.’

The 1970s heroin ‘scene’
‘On the Lower East Side in the 1970s, heroin became very social. It wasn’t like people were sneaking off and doing it – you’d go to somebody’s house and they’d go, “Would you like some?” and we were all saying, “Oh, sure.” You’d develop what they would call a chippy – a little habit. Then years later, I think it became more of a necessity. Self-medication, as they say. I got sick of the routine of it, the rat race of it, the constant hassle of finding stuff. You always have to find more heroin. I got tired of it and just said, “OK, enough.”‘

Inside Studio 54
‘I remember going to Studio 54 and getting drunk. And not really knowing how I got drunk, and ending up in a pile of bodies. I don’t think I went there a lot – it wasn’t my scene. We were more downtown rockers. The time that 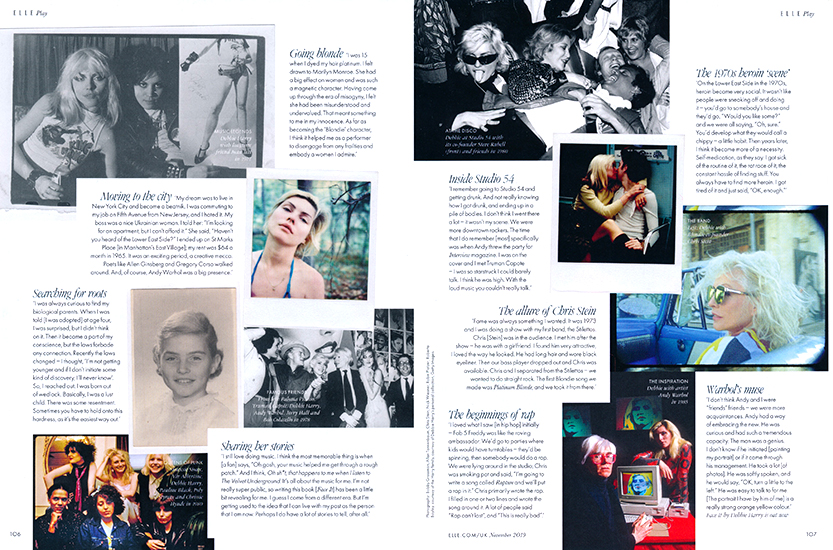 I do remember [most] specifically was when Andy threw the party for Interview magazine. I was on the cover and I met Truman Capote – I was so starstruck I could barely talk. I think he was high. With the loud music you couldn’t really talk.’

The allure of Chris Stein
‘Fame was always something I wanted. It was 1973 and I was doing a show with my first band, the Stilettos.
Chris [Stein] was in the audience. I met him after the show – he was with a girlfriend. I found him very attractive, I loved the way he looked. He had long hair and wore black eyeliner. Then our bass player dropped out and Chris was available. Chris and I separated from the Stilettos – we wanted to do straight rock. The first Blondie song we made was Platinum Blonde, and we took it from there.’

The beginnings of rap
‘I loved what I saw [in hip hop] initially – Fab 5 Freddy was like the roving ambassador. We’d go to parties where kids would have turntables – they’d be spinning, then somebody would do a rap. We were lying around in the studio; Chris was smoking pot and said, “I’m going to write a song called Rapture and we’ll put a rap in it.” Chris primarily wrote the rap. I filled in one or two lines and wrote the song around it. A lot of people said “Rap can’t last”, and “This is really bad”.’

Warhol’s muse
‘I don’t think Andy and I were “friends” friends – we were more acquaintances. Andy had a way of embracing the new. He was curious and had such a tremendous capacity. The man was a genius. I don’t know if he initiated [painting my portrait] or if it came through his management. He took a lot [of photos]. He was softly spoken, and he would say, “OK, turn a little to the left.” He was easy to talk to for me. [The portrait I have by him of me] is a really strong orange yellow colour.’

Face It by Debbie Harry is out now 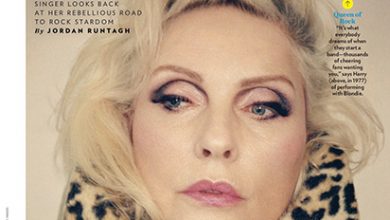