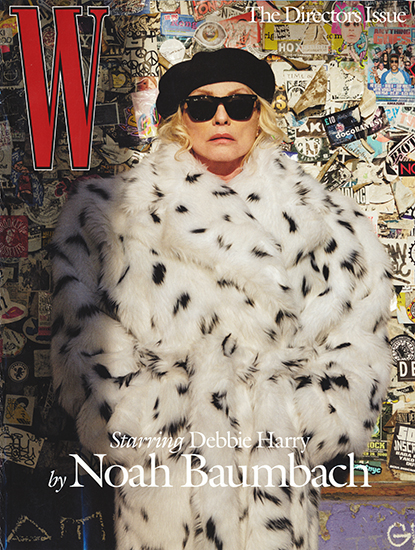 Long before awards season begins, I try to see as many movies as possible in preparation for our annual Directors Issue, which is now in its third iteration. It was a great year in cinema, and choosing the directors to feature was not easy, but in the end we invited Quentin Tarantino (Once Upon a Time… in Hollywood), Bong Joon Ho (Parasite), and Noah Baumbach (Marriage Story) to direct three remarkable photo shoots for W. Getting to spend time with three of the best directors in the world as the height of their careers has been one of the best parts of my job. It was a joy to witness how they each approached their projects so differently. 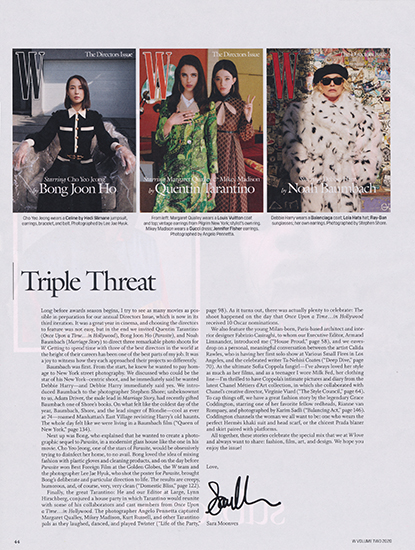 Baumbach was first. From the start, he knew he wanted to pay homage to New York street photography. We discussed who could be the star of his New York – centric shoot, and he immediately said he wanted Debbie Harry – and Debbie Harry immediately said yes. We introduced Baumbach to the photographer Stephen Shore; unbeknownst to us, Adam Driver, the male lead in Marriage Story, had recently gifted Baumbach one of Shore’s books. On what felt like the coldest day of the year, Baumbach, Shore, and the lead singer of Blondie – cool as ever at 74 – roamed Manhattan’s East Village revisiting Harry’s old haunts. The whole day felt like we were living in a Baumbach film (“Queen of New York,” page 134).

It’s the coldest day of a dreary New York winter, and Debbie Harry is posing for the camera in front of a billowing steam pipe in the middle of First Avenue, staring down on oncoming traffic in knee-high white patent-leather boots with four-inch heels. As an ice-encrusted 18-wheeler comes speeding toward her, she neither bats an eyelash nor moves a muscle, maintaining that same deeply sexy, defiantly bored expression that even a casual fan of Blondie’s – the iconic band she’s fronted for more than four decades – could identify from a block away. “Phew!” says a member of the photo crew once Harry has safely made it back to the sidewalk. “You almost got hit by a Mack truck!” Harry cocks an eyebrow. “Wow,” she deadpans. “You really know your trucks.” 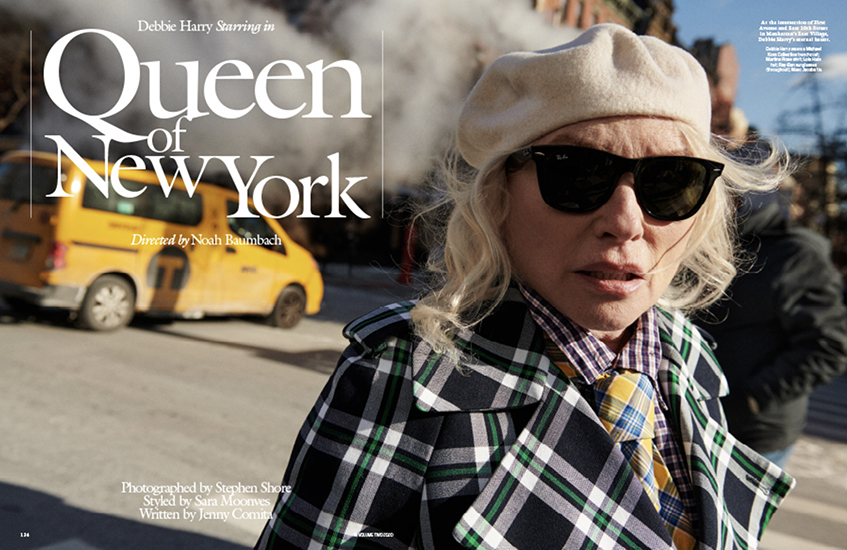 At 74 years old, Debbie Harry remains – of it’s not entirely obvious by now – the very definition of punk rock. The week before, she was performing onstage at the Bowery Ballroom. Today she is bopping around Manhattan’s East Village in a succession of chic coats and jaunty berets, with photographer Stephen Shore snapping away and the Marriage Story writer-director Noah Baumbach – a die-hard Blondie fan who cast Harry in this project – calling the shots. As millennial record store employees fail miserably in their attempts at nonchalance in her presence, and a local restaurant owner falls all over himself trying to shake her hand, it becomes clear that Harry is in many ways the patron saint of the neighborhood, an emblem of a time before CBGB became a John Varvatos store and St. Marks Place had its very own Chipotle.

When Harry first moved to New York, in 1965, after a storybook postwar childhood in Hawthorne, New Jersey, she landed here, in a $67-a-month apartment on St. Marks and Avenue A. In addition to stints as a waitress at Max’s Kansas City, a secretary for the BBC, a bikini bartender, and a Playboy Bunny, she worked in a head shop two doors down from the surprisingly still kicking Ukrainian diner Veselka, where she stops today to sit for a few photos. “It was sort of the Mecca for music and the new rock scene,” she says of the neighborhood back then. “The painters and photographers tended to live below Houston or Canal streets because of the loft space, but the East Village was perfect for us – the hippies and the musicians.” 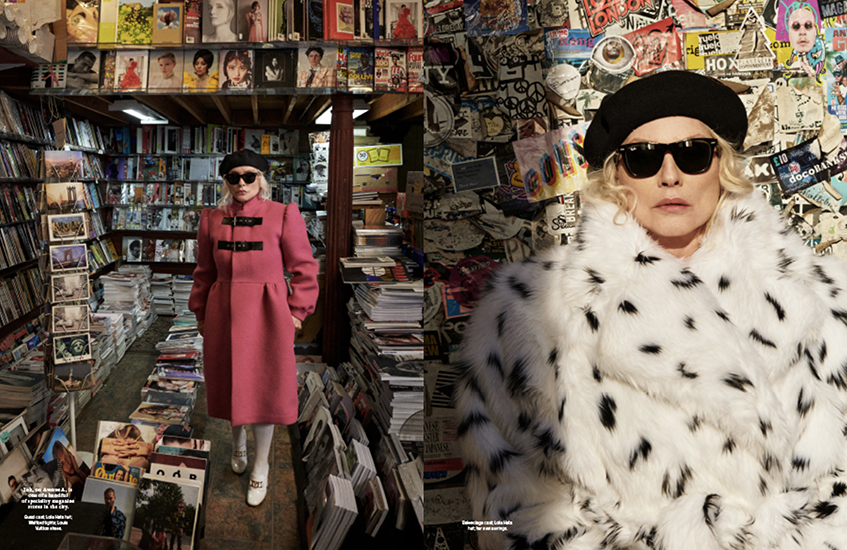 Over the years she moved around a lot, to a sweet apartment on a leafy block in Chelsea; to a derelict building on the Bowery that she shared with, among others, the designer Stephen Sprouse; to a ritzy Upper East Side brownstone that was ultimately seized by the IRS after some fairly major tax drama. Through it all, the city she looked at longingly as a kid from across the river has remained her creative touchstone. “It’s simple,” she writes in her memoir, Face It, which came out this past October, “it’s New York City for me… everything that I’m attracted to and have ever wanted to be like is in New York. New York is my pulse. New York is my heart.”

The feeling, as Baumbach sees it, has always been mutual. When he was growing up in Brooklyn, in the late ’70s and early ’80s, “pretty much everyone was listening to Blondie,” says the director, who considers Parallel Lines, the band’s 1978 breakthrough, “really the record of my childhood.” It was the first album he ever bought, from a shop called Soundtrack near his home in Park Slope. As a 10-year-old, he wore a Blondie pin – which was so large and heavy that it ripped a few of his shirts – with such frequency that, he remembers, “some kids who I wanted to be friends with, who seemed like the cooler kids, started to call me Blondie. And something about that just felt really good.” 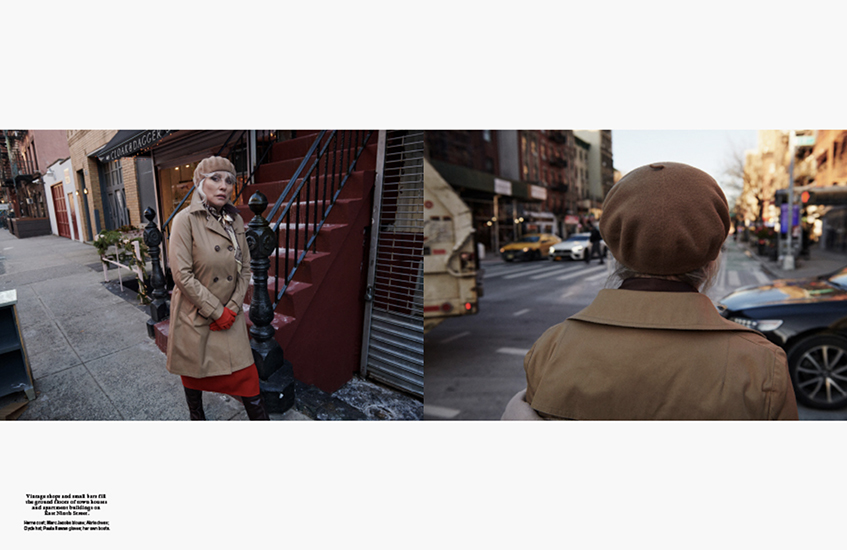 As much as the music, Baumbach was attracted to the band’s attitude and rakish mod-punk style. “I loved how they looked on the cover of Parallel Lines, how the men were all kind of dressed similarly but with different sneakers. They all had their own take on the look, and then Debbie was amazing, with her hands on her hips in the middle, sort of confrontational. It was a record I wanted to live in.”

Blondie, and Harry in particular, seemed to epitomize a gritty down-town glamour that, for a kid in the 1980s Brooklyn, was so close yet felt so far away. Baumbach and his friends would take the subway into Manhattan, flip through the bins ay Tower Records, and walk by CBGB, but, well aware of their status as awkward adolescents, never went in. “It felt like an entirely different place, Manhattan from Brooklyn,” he says. “I could identify with it on one hand, but it also was not my life. It just felt like all this amazing stuff was happening over there that I wasn’t a part of. And that was true of New York bands and the photos of Debbie that I was thinking about when we were planning this shoot.” 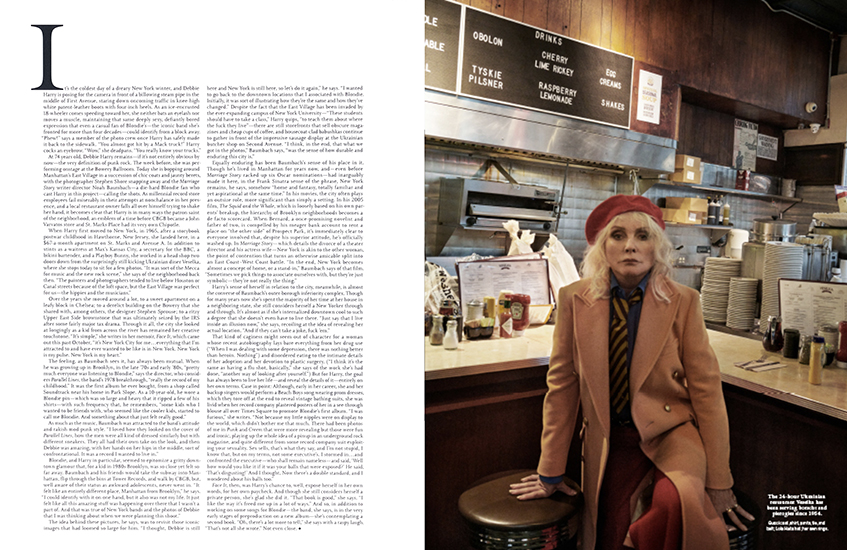 The idea behind these pictures, he says, was to revisit those iconic images that had loomed so large for him. “I thought, Debbie is still here and New York is still here, so let’s do it again,” he says. “I wanted to go back to the downtown locations that I associated with Blondie. Initially, it was sort of illustrating how they’re the same and how they’ve changed.” Despite the fact that the East Village has been invaded by the ever-expanding campus of New York University – “These students should have to take a class,” Harry quips, “to teach them about where the fuck they live” – there are still storefronts that sell obscure magazines and cheap cups of coffee, and housecoat-clad babushkas continue to gather in front of the impressive sausage display at the Ukrainian butcher shop on Second Avenue. “I think, in the end, that what we got in the photos,” Baumbach says, “was the sense of how durable and enduring this city is.”

Equally enduring has been Baumbach’s sense of his place in it. Though he’s lived in Manhattan for years now, and – even before Marriage Story racked up six Oscar nominations – had inarguably made it here, in the Frank Sinatra sense of the phrase, New York remains, he says, somehow “home and fantasy, totally familiar and yet aspirational at the same time.” In his movies, the city often plays an outsize role, more significant than simply a setting. In his 2005 film, The Squid and the Whale, which is loosely based on his own parents’ breakup, the hierarchy of Brooklyn neighborhoods becomes a de facto scorecard. When Bernard, a once-promising novelist and father of two, is compelled by his meager bank account to rent a place on “the other side” of Prospect Park, it’s immediately clear to everyone involved that, despite his superior attitude, he’s officially washed up. In Marriage Story – which details the divorce of a theater director and his actress wife – New York is akin to the other woman, the point of contention that turns an otherwise amicable split into an East Coast – West Coast battle. “In the end, New York becomes almost a concept of home, or a stand-in,” Baumbach says of that film. “Sometimes we pick things to associate ourselves with, but they’re just symbolic – they’re not really the thing.” 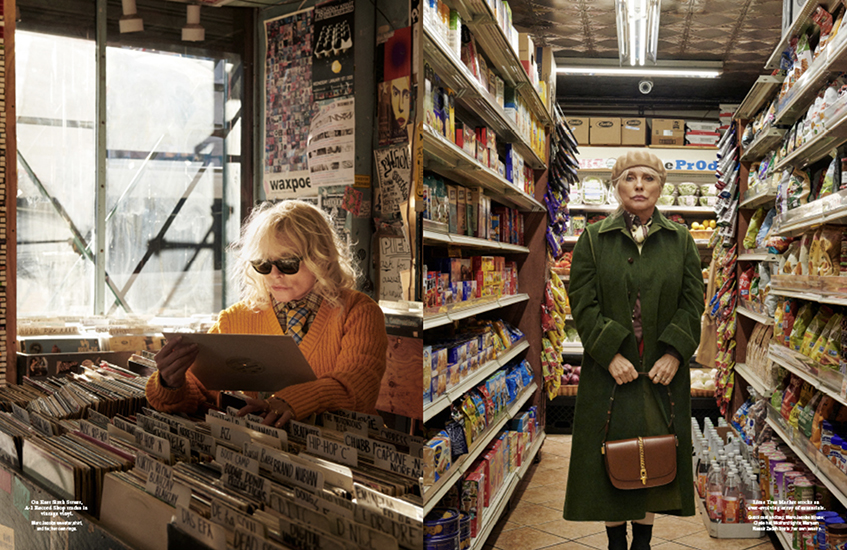 Harry’s sense of herself in relation to the city, meanwhile, is almost the converse of Baumbach’s outer-borough inferiority complex. Though for many years now she’s spent the majority of her time at her house in a neighboring state, she still considers herself a New Yorker through and through. It’s almost as if she’s internalized downtown cool to such a degree that she doesn’t even have to live there. “Just say that I live inside an illusion now,” she says, recoiling at the idea of revealing her actual location. “And if they can’t take a joke, fuck ’em.”

That kind of caginess might seem out of character for a woman whose recent autobiography lays bare everything from her drug use (“When I was dealing with some depression, there was nothing better than herioin. Nothing”) and disordered eating to the intimate details of her adoption and her devotion to plastic surgery. (“I think it’s the same as having a flu shot, basically,” she says of the work she’s had done, “another way of looking after yourself.”) But for Harry, the goal has always been to live her life – and reveal the details of it – entirely on her own terms. Case in point: Although, early in her career, she and her backup singers would perform a Beach Boys song wearing prom dresses, which they tore off at the end to reveal vintage bathing suits, she was livid when her record company plastered posters of her in a see-through blouse all over Times Square to promote Blondie’s first album. “I was furious,” she writes. “Not because my little nipples were on display to the world, which didn’t bother me that much. There had been photos of me in Punk and Creem that were more revealing but those were fun and ironic, playing up the whole idea of a pinup in an underground rock magazine, and quite different from some record company suit exploiting your sexuality. Sex sells, that’s what they say, and I’m not stupid, I know that, but on my terms, not some executive’s. I stormed in… and confronted the executive – who shall remain nameless – and said, ‘Well how would you like it if it was your balls that were exposed?’ He said, ‘That’s disgusting!’ And I thought, Now there’s a double standard, and I wondered about his balls too.” 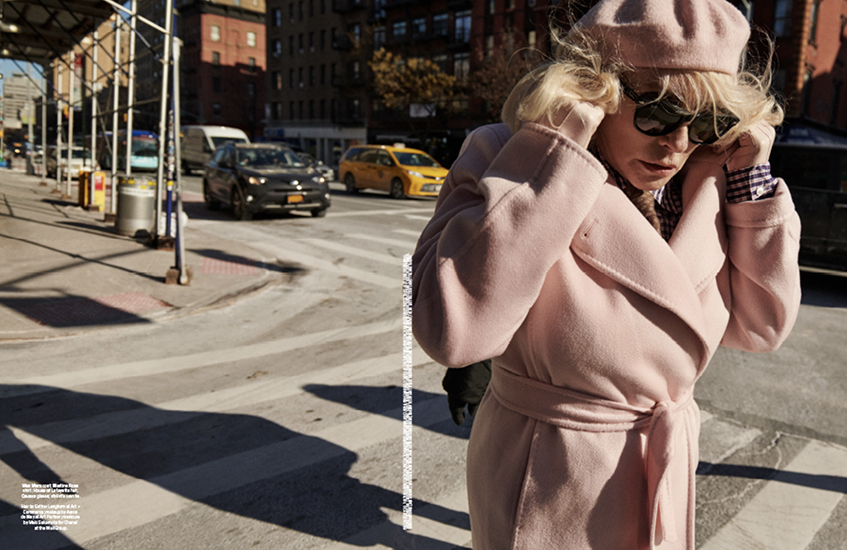 Face It, then, was Harry’s chance to, well, expose herself in her own words, for her own paycheck. And though she still considers herself a private person, she’s glad she did it. “That book is good,” she says. “I like the way it’s freed me up in a lot of ways.” And so, in addition to working on some songs for Blondie – the band, she says, is in the very early stages of preproduction on a new album – she’s contemplating a second book. “Oh, there’s a lot more to tell,” she says with a raspy laugh. “That’s not all she wrote.” Not even close.