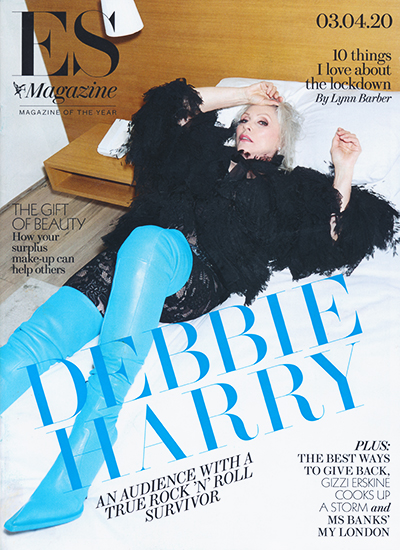 Is music more important than television or film or anything else right now? I think so. TV and movies will fill up time that would otherwise be spent doing all kinds of things. But music – the right song at the right time – can lift you out of this sometimes overwhelming reality and get you through the occasional lows that we’re all experiencing. For me, so far, the music of Debbie Harry and Blondie has fulfilled this role: ‘Call Me’, ‘Atomic’, ‘Heart Of Glass’… these are tunes that take you somewhere else for three minutes. And the interview on page 14 with the woman who sang them, our cover star this week, will do the same. Debbie Harry is as sharp, opinionated and forthright as you’d expect one of the last true rock’n’roll icons to be. 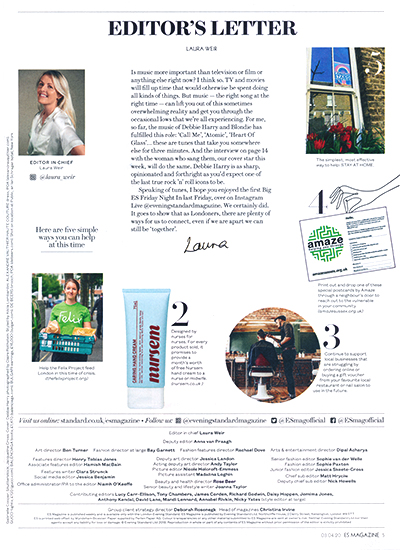 From heroin to extreme violence, Debbie Harry has survived it all. And whether it’s Taylor Swift or Miley Cyrus, she isn’t afraid to tell it how she sees it.
Ellie Austin meets a true rock’n’roll iconoclast

In a penthouse suite at Public hotel on New York’s Lower East Side, Debbie Harry sits perfectly still, eyes closed and lips pursed, as a swarm of people swirl around her making nervous small talk and telling her how beautiful she looks.
And she does. A few minutes earlier, Harry, 74, had quietly slipped in the door looking like she’d just stepped off stage, with a face of perfect make-up (complete with fake eyelashes) and her grey-blonde hair artfully swept back. ‘I’ve had a go at getting started but I know I’m going to need some help,’ she giggles in her slightly doll-like New York lilt. At 5ft 2in, she’s petite but strong-looking, the ski-slope cheekbones and heart-shaped lips that made her a global sex symbol still very much intact. She’s dressed all in black in Lycra leggings, ankle boots, a vintage Comme des Garçons hooded jumper and – less glamorously – a pair of Nike running gloves.
‘It’s the touching thing,’ she says breezily. ‘It’s better to wear gloves at the moment with this virus.’ It’s the day before a state of emergency is declared in New York and a hum of anxiety underpins preparations for the ES shoot – as well as a sense that this could be everyone’s last dose of normality for a while. Harry, however, seems calm. ‘I suppose I should panic,’ she sighs. ‘And I’m taking precautions, but I don’t think we know enough yet.’ 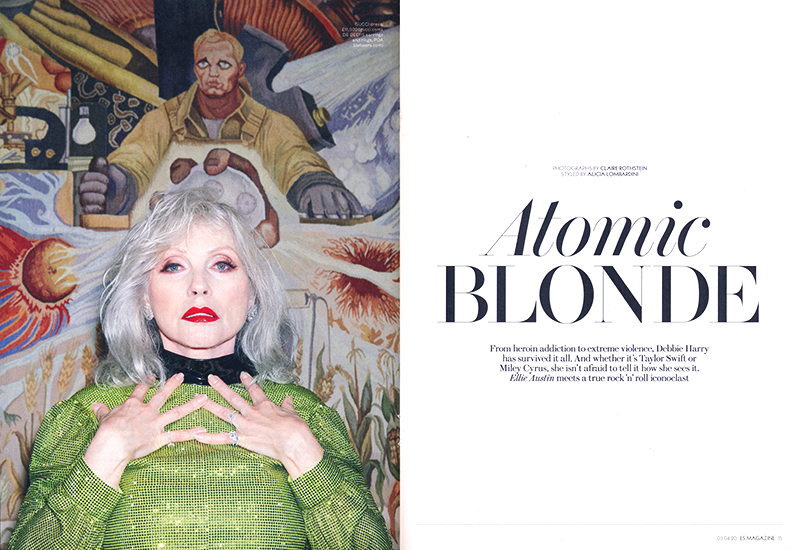 People are falling over themselves to make sure she’s comfortable. Does she need food? A coffee? ‘Oh no!’ she gasps. ‘I’ll take a water – and a pillow to sit on.’ She is polite and easy to be around, with none of the diva antics you might expect of someone who has sold more than 40 million records worldwide.
Not one to rest on her laurels, last year she published Face It, a rip-roaring autobiography detailing her rise to fame as the enigmatic frontwoman of Blondie. And as soon as she can, post-corona, she is embarking on an ‘in conversation’ tour around the UK with Chris Stein, the band’s co-founder and guitarist – and Harry’s former boyfriend.
As well as the speaking tour – which you sense is really an excuse for the two of them to spend quality time together, reminiscing – Harry and Stein are also working on a 12th Blondie album. ‘I’m in writing and production mode at the moment,’ she says when we move to the hotel’s deserted bar and settle in two big, velvety armchairs in front of a crackling fire. ‘I’d like to continue recording for a very long time.’
Harry met Stein in 1973 and they were a couple for 13 years, racking up hit after hit (‘Heart Of Glass’, ‘Atomic’, ‘The Tide Is High’, ‘Rapture’) while also seeing each other through some pretty rough times. There was the night they were held up at knifepoint by a man who then raped Harry in her apartment – in front of Stein; their respective heroin addictions; and the near-fatal autoimmune disease that struck Stein just as he and Harry were hit with a huge tax bill that nearly left them homeless. It was Harry who nursed Stein back to health before they split up, amicably, in 1987. Stein went on to marry actress Barbara Sicuranza and have two daughters. Harry is godmother to them both.
On and off stage, Harry has never been one to conform to expectations, and in Face It, she describes her rape in a breezy tone that some have found uncomfortable. ‘I was more embarrassed than afraid,’ she writes, adding it was the perpetrator’s theft of Stein’s guitars that ‘stung the most’.
What would she say to those who see her response as unusually flippant? ‘It’s an opinion,’ she shrugs brusquely. Can she honestly say the attack had no psychological impact on her? ‘I have a friend who is a great example to me,’ she says, going off at a tangent. ‘I used to be all morbid about things and this friend would say, “Well, I’ve got five minutes for that,” and then she’d move on. For a while I wondered how she did it, but I took a lesson from it and managed to make it work for me. I can’t always make it work. Sometimes I live with this darkness or idea of impossibility, but I was in a great relationship [with Stein] at the time and we supported each other through it.’ 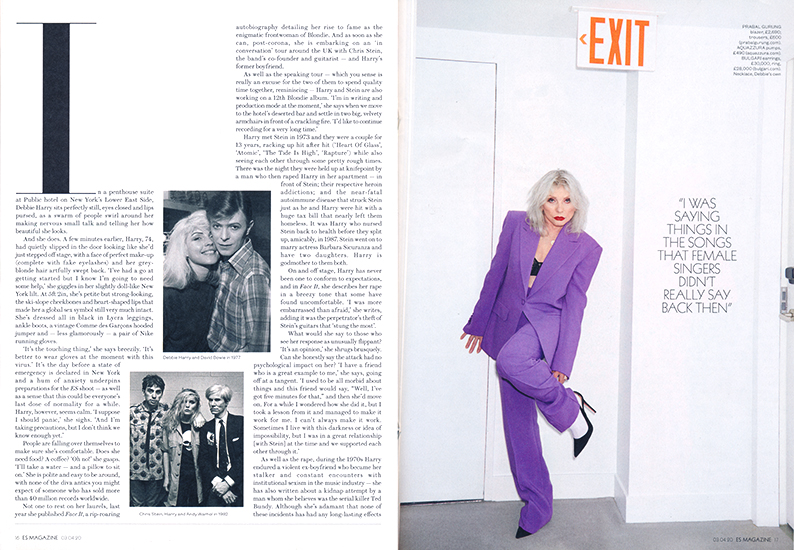 As well as the rape, during the 1979s Harry endured a violent ex-boyfriend who became her stalker and constant encounters with institutional sexism in the music industry – she has also written about a kidnap attempt by a man whom she believes was the serial killer Ted Bundy. Although she’s adamant that none of these incidents has had any long-lasting effects on her life, it’s hard not to see her Blondie persona as a riposte to the men who did her wrong. ‘I was saying things in the songs that female singers didn’t really say back then,’ Harry writes of the band’s early years. ‘I wasn’t submissive or begging him to come back. I was kicking his ass, kicking him out, kicking my own ass, too.’
At a time when women across the entertainment industry are more vocal than ever about the inequality they face, for many, Harry – with her fierce talent and refusal to be derailed by decades of small-mindedness, discrimination and outright abuse – is a hero. How does she think her experience of the music industry compares to today’s young female artists? ‘My God, they’re so much more in demand,’ she exclaims. ‘Their product is more valuable. It still depends on if they have decent representation, though.’
She thinks Billie Eilish is ‘fantastic’ and loves Lizzo (‘oh, she’s got a great personality’). Taylor Swift? ‘I think she’s really talented,’ she says. ‘Sometimes I find the things she’s on about [sexism in the music industry] a bit of an overstatement.’
A few years ago, Harry said that someone like Miley Cyrus should be ‘cherished’ for helping young people express their sexuality, but today she’s changed her tune. ‘I’m over that soft porn look,’ she says. ‘There are two different levels here. People who rely on that soft porn thing and people who are real artists. Lady Gaga is a phenomenal artist. She does kooky stuff but she isn’t overtly sexual. You think of her as a musician first.’
Born in Miami in 1945, Harry was adopted when she was three months old by a church-going couple from New Jersey. Although loved and happy, from a young age she felt out of place in this quiet, suburban world and spent hours in front of the TV losing herself in cartoons, wrestling matches and films. It’s Marilyn Monroe, with her platinum blonde hair and mixture of ‘vulnerability and a particular kind of femaleness’, who Harry cites as her biggest influence.
Aged 20, she left for New York and immersed herself in the city’s underground music scene. Over the next few years she worked as a Playboy bunny, a BBC secretary and a waitress at Max’s Kansas City, the uber-cool nightspot beloved by the likes of Andy Warhol, Patti Smith, Janis Joplin and Miles Davis. During all of this, she played in bands, trying her hand at punk rock and folk before meeting Stein and committing to Blondie. How 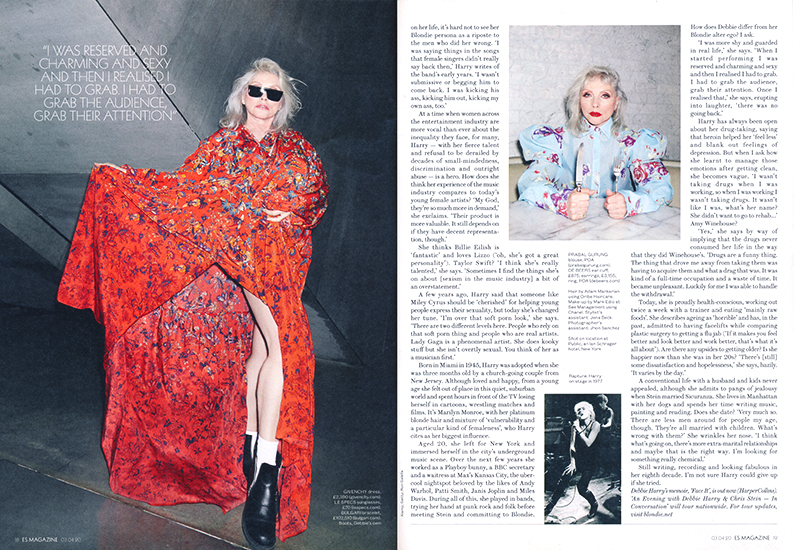 does Debbie differ from her Blondie alter ego? I ask.
‘I was more shy and guarded in real life,’ she says. ‘When I started performing I was reserved and charming and sexy and then I realised I had to grab. I had to grab the audience, grab their attention. Once I realised that,’ she says, erupting into laughter, ‘there was no going back.’
Harry has always been open about her drug-taking, saying that heroin helped her ‘feel less’ and blank out feelings of depression. But when I ask how she learnt to manage those emotions after getting clean, she becomes vague. ‘I wasn’t taking drugs when I was working, so when I was working I wasn’t taking drugs. It wasn’t like I was, what’s her name? She didn’t want to go to rehab…’
Amy Winehouse?
‘Yes,’ she says by the way of implying that the drugs never consumed her life in the way that they did Winehouse’s. ‘Drugs are a funny thing. The thing that drove me away from taking them was having to acquire them and what a drag that was. It was kind of a full-time occupation and a waste of time. It became unpleasant. Luckily for me I was able to handle the withdrawal.’
Today, she is proudly health-conscious, working out twice a week with a trainer and eating ‘mainly raw foods’. She describes ageing as ‘horrible’ and has, in the past, admitted to having facelifts while comparing plastic surgery to getting a flu jab (‘If it makes you feel better and look better and work better, that’s what it’s all about’). Are there any upsides to getting older? Is she happier now than she was in her 20s? ‘There’s [still] some dissatisfaction and hopelessness,’ she says hazily. ‘It varies by the day.’
A conventional life with a husband and kids never appealed, although she admits to pangs of jealousy when Stein married Sicuranza. She lives in Manhattan with her dogs and spends her time writing music, painting and reading. Does she date? ‘Very much so. There are less men around for people my age, though. They’re all married with children. What’s wrong with them?’ She wrinkles her nose. ‘I think what’s going on, there’s more extra-marital relationships and maybe that is the right way. I’m looking for something really chemical.’
Still writing, recording and looking fabulous in her eighth decade. I’m not sure Harry could give up if she tried.

Debbie Harry’s memoir, ‘Face It’, is out now (HarperCollins).
‘An Evening with Debbie Harry & Chris Stein – In Conversation’ will tour nationwide. For tour updates, visit blondie.net