Before singing Blondie’s imperious 2010 single ‘Mother’, frontwoman Debbie Harry – whose band took home the NME Godlike Genius gong in 2014 – surveys the baying Manchester AO Arena crowd. “Well, it’s a holiday weekend – you can really destroy yourself tonight if you like!,” she jokes, before wistfully adding: “We were just saying, ‘Wow… it’s really been two years since I’ve done any singing.’ That’s really weird.’”

The deity’s latest tour is, with characteristic wry humour, called Against The Odds – and it’s increasingly lived up to its name. Announced during COVID, dates were rescheduled due to pandemic restrictions, with original support act Garbage replaced by hometown hero Johnny Marr. Then co-founder and guitarist Chris Stein announced he couldn’t tour because of health reasons, with Andee Blacksugar filling in for him. With the pleasing addition of former Sex Pistol Glen Matlock on bass, the group more than make up for lost time.

Given that they share their name with a comic book character and are fronted by someone Iggy Pop once described as “Barbarella on speed”, it’s perhaps fitting the night begins with arresting graphic novel visuals of the band, as Harry delivers the impassive spoken-word opening of their 1976 bubblegum-punk debut single ‘X Offender’. At 76, she still looks (and sounds) every inch the exemplar of New York cool, like a living cartoon in a green leather outfit, shades and a halo of peroxide.

Marr expertly warms up the crowd with slam-dunk Smiths classics ‘Panic’, ‘This Charming Man’ and ‘There Is A Light That Never Goes Out’. And then Blondie arrive to pack in the future-nostalgic hits tighter than carbon molecules in a diamond: a hyper-aggressive ‘Hanging on the Telephone’, the irresistibly sweet ‘Sunday Girl’, the wistful ‘Picture This’ and a transcendent ‘Heart of Glass’ (the latter mixed in with a coda of Donna Summer’s disco touchstone ‘I Feel Love’). Having reformed in 1999, Blondie 2.0 have lasted longer than they did the first time around. Their more recent material duly shines: take 2017’s evocative ‘Long Time’ and the muscular ‘My Monster’, which featured on their last album ‘Pollinator’ and – fittingly – was written by Marr.

Clem Burke’s powerhouse drumming is always a thing of wonder, while guitarist Tommy Kessler is brought to the fore for showboating solos during ‘Atomic’. If the songs haven’t dated, neither has the band’s forward-thinking attitude. Introducing their 1999 comeback chart-topper ‘Maria’, Harry gives a subtle shout-out to trans rights: “I usually say that this is for the girls, but we’re living in a different world now, so anybody who feels like they want to be a girl – go right ahead.”

As the ominous organ music of Bach’s Toccata in D Minor kicks in, Blondie start the encore with the fan service curio ‘No Exit’, a one-woman version of their 1999 gangster-rap team-up with Coolio, Mobb Deep and Wu-Tang Clan. Then comes sprawling ‘Pollinator’ cut ‘Fragments’, before the classics ‘Call Me’ and ‘One Way Or Another’ elicit a predictably rowdy reaction. In 1979, Blondie’s first ever NME cover proclaimed “The revolution will be peroxide” – and tonight’s stellar performance showed a storied band unwilling to rest on their victory.

‘Hanging on the Telephone’

‘Fade Away and Radiate’

‘The Tide Is High’

‘One Way or Another’ 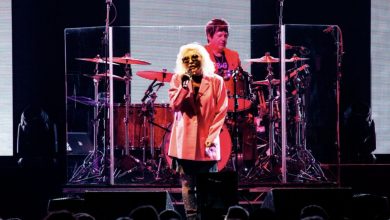 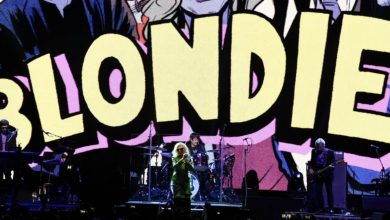 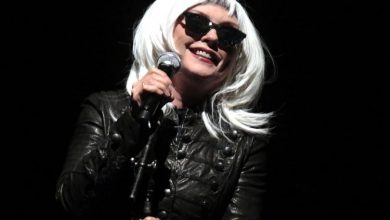 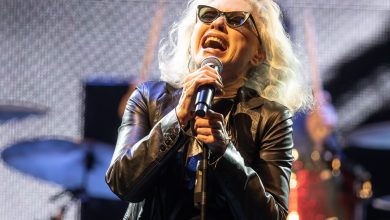