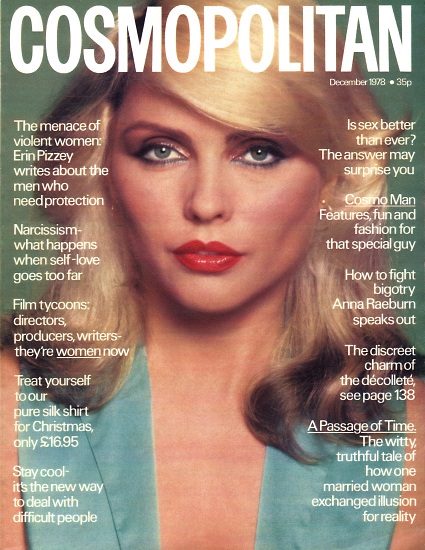 What kind of woman would get up on a stage in front of twenty rows of drooling guys and sing lyrics like, “I will give you my finest hour – the one I spent watching you shower”?
Debbie Harry, vocalist of New Wave group Blondie, is the first white female rock star who isn’t coy about being sexy. She’s got it, she knows it, and she flaunts it. “I wish I had invented sex,” she says. Sex is everything. It’s number one.”
Sex sells. In contrast to the soft eyelash-fluttering songs offered by the Linda Ronstadts and the Olivia Newton-Johns, or the phony moanings of a Donna Summer, Debbie Harry purveys down-to-earth lyrics like, “All I want is a photo in my wallet, a small remembrance of something more solid.” Jumping up and down on stage like a pogo stick on heat, Debbie leaves no doubt exactly which portion of her lover’s anatomy she remembers best.
Debbie Harry and Blondie have had three big hits in Britain, though they have yet to rise above cult status in their native America. Their songs, like “Picture This”, generally use what Debbie calls a “bump-and-grind beat”, and are far more to the point than the usual Top Ten ditties of the June-moon-spoon variety.
“We’re more, uh, sophisticated than the old-style groups,” says Debbie. “We’re closer to what kids really think. Teenagers do watch each other shower, and other things too. They get together real young today.”
Aside from their songs’ frankness, the gimmick that sets Blondie apart from others in the tell-it-like-it-is New Wave is their Brigitte Bardot-ish leading lady. Other groups in the genre are pursuing Slum Chic, but Debbie will 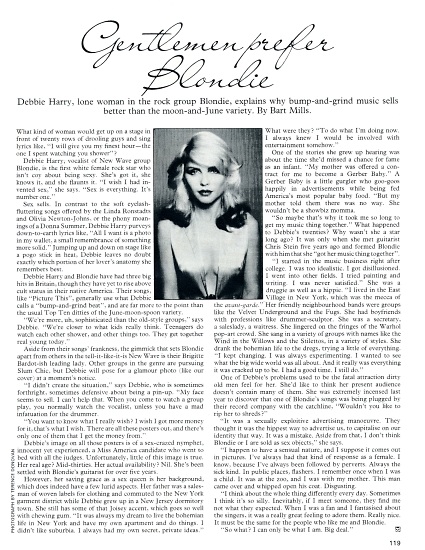 pose for a glamour photo (like our cover) at a moment’s notice.
“I didn’t create the situation,” says Debbie, who is sometimes forthright, sometimes defensive about being a pin-up. “My face seems to sell. I can’t help that. When you come to watch a group play, you normally watch the vocalist, unless you have a mad infatuation for the drummer.
“You want to know what I really wish? I wish I got more money for it, that’s what I wish. There are all these posters out, and there’s only one of them that I get money from.”
Debbie’s image on all those posters is of a sex-crazed nymphet, innocent yet experienced, a Miss America candidate who went to bed with all the judges. Unfortunately, little of this image is true. Her real age? Mid-thirties. Her actual availability? Nil. She’s been settled with Blondie’s guitarist for over five years.
However, her saving grace as a sex queen is her background, which does indeed have a few lurid aspects. Her father was a salesman of woven labels for clothing and commuted to the New York garment district while Debbie grew up in a New Jersey dormitory town. She still has some of that Joisey accent, which goes so well with chewing gum. “It was always my dream to live the bohemian life in New York and have my own apartment and do things. I didn’t like suburbia. I always had my own secret, private ideas.” What were they? “To do what I’m doing now. I always knew I would be involved with entertainment somehow.”
One of the stories she grew up hearing was about the time she’d missed a chance for fame as an infant. “My mother was offered a contract for me to become a Gerber Baby.” A Gerber Baby is a little gurgler who goo-goos happily in advertisements while being fed America’s most popular baby food. “But my mother told them there was no way. She wouldn’t be a showbiz momma.
“So maybe that’s why it took me so long to get my music thing together.” What happened to Debbie’s twenties? Why wasn’t she a star long ago? It was only when she met guitarist Chris Stein five years ago and formed Blondie with him that she “got her music thing together”.
“I started in the music business right after college. I was too idealistic. I got disillusioned. I went into other fields. I tried painting and writing. I was never satisfied.” She was a druggie as well as a hippie. “I lived in the East Village in New York, which was the mecca of the avant-garde.” Her friendly neighbourhood bands were groups like the Velvet Underground and the Fugs. She had boyfriends with professions like drummer-sculptor. She was a secretary, a saleslady, a waitress. She lingered on the fringes of the Warhol pop-art crowd. She sang in a variety of groups with names like the Wind in the Willows and the Stilettos, in a variety of styles. She drank the bohemian life to the dregs, trying a little of everything. “I kept changing. I was always experimenting. I wanted to see what the big wide world was all about. And it really was everything it was cracked up to be. I had a good time. I still do.”
One of Debbie’s problems used to be the fatal attraction dirty old men feel for her. She’d like to think her present audience doesn’t contain many of them. She was extremely incensed last year to discover that one of Blondie’s songs was being plugged by their record company with the catchline, “Wouldn’t you like to rip her to shreds?”
“It was a sexually exploitive advertising manoeuvre. They thought it was the hippest way to advertise us, to capitalise on our identity that way. It was a mistake. Aside from that, I don’t think Blondie or I are sold as sex objects,” she says.
“I happen to have a sensual nature, and I suppose it comes out in pictures. I’ve always had that kind of response as a female. I know, because I’ve always been followed by perverts. Always the sick kind. In public places, flashers. I remember once when I was a child. It was at the zoo, and I was with my mother. This man came over and whipped open his coat. Disgusting.
“I think about the whole thing differently every day. Sometimes I think it’s so silly. Inevitably, if I meet someone, they find me not what they expected. When I was a fan and I fantasised about the singers, it was a really great feeling to adore them. Really nice. It must be the same for the people who like me and Blondie.
“So what? I can only be what I am. Big deal.”