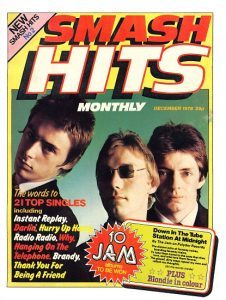 IT’S FUNNY to remember now that this time last year, when Blondie came to Britain for a string of concerts, the group’s publicity people were almost desperate in their efforts to drum up interest in the press to help slow-moving ticket sales.
Blondie came back again for a concert tour this summer, but this time public demand was so strong that they were forced to play extra shows.
Of course three big-selling hit singles happened in between these two visits, and the press discovered Blondie – or rather the stunning Debbie Harry – in no uncertain manner. The lady is now one of the most-photographed, most-interviewed pop stars of recent times and her group can’t seem to put a foot wrong in the charts.
For Debbie, though, this public recognition has been a long time coming. She’s certainly no bright-eyed young innocent – she doesn’t talk about her age, but she definitely won’t see 30 again. 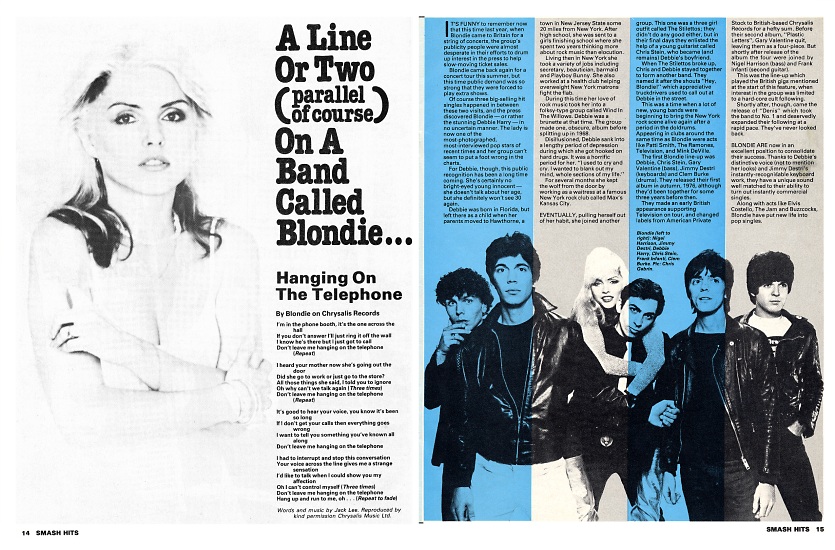 Debbie was born in Florida, but left there as a child when her parents moved to Hawthorne, a town in New Jersey State some 20 miles from New York. After high school, she was sent to a girls finishing school where she spent two years thinking more about rock music than elocution.
Living then in New York she took a variety of jobs including secretary, beautician, barmaid and Playboy Bunny. She also worked at a health club helping overweight New York matrons fight the flab.
During this time her love of rock music took her into a folksy-type group called Wind In he Willows. Debbie was a brunette at the time. The group made one, obscure, album before splitting up in 1968.
Disillusioned, Debbie sank into a lengthy period of depression during which she got hooked on hard drugs. It was a horrific period for her. “I used to cry and cry. I wanted to blank out my mind, whole sections of my life.”
For several months she kept the wolf from the door by working as a waitress at a famous New York rock club called Max’s Kansas City.

EVENTUALLY, pulling herself out of her habit, she joined another group. This one was a three girl outfit called The Stilettos; they didn’t do any good either, but in their final days they enlisted the help of a young guitarist called Chris Stein, who became (and remains) Debbie’s boyfriend.
When The Stilettos broke up, Chris and Debbie stayed together to form another band. They named it after shouts “Hey, Blondie!” which appreciative truckdrivers used to call out at Debbie in the street. 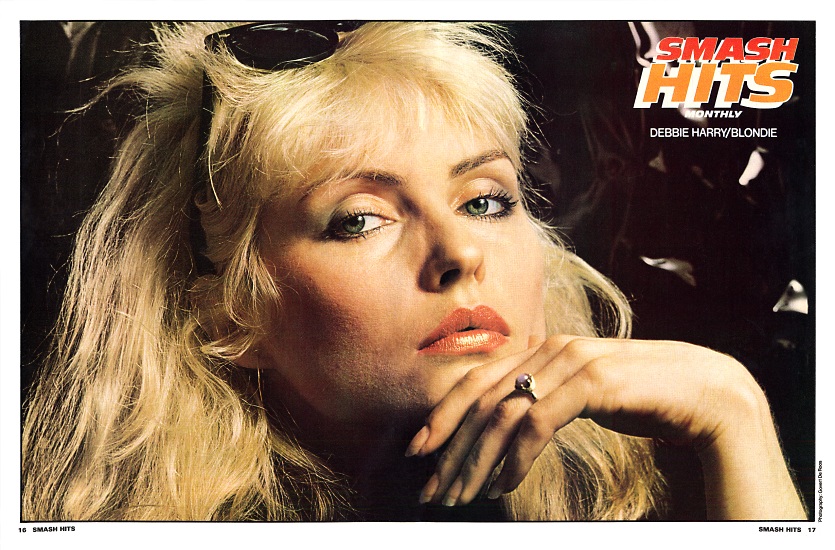 This was a time when a lot of new, young bands were beginning to bring the New York rock scene alive again after a period in the doldrums. Appearing in clubs around the same time as Blondie were acts like Patti Smith, The Ramones, Television, and Mink DeVille.
The first Blondie line-up was Debbie, Chris Stein, Gary Valentine (bass), Jimmy Destri (keyboards) and Clem Burke (drums). They released their first album in autumn, 1976, although they’d been together for some three years before then.
They made an early British appearance supporting Television on tour, and changed labels from American Private Stock to British-based Chrysalis Records for a hefty sum. Before their second album, “Plastic Letters”, Gary Valentine quit, leaving them as a four-piece. But shortly after release of the album the four were joined by Nigel Harrison (bass) and Frank Infanti (second guitar).
This was the line-up which played the British gigs mentioned at the start of this feature, when interest in the group was limited to a hard-core cult following.
Shortly after, though, came the release of “Denis” which took the band to No. 1 and deservedly expanded their following at a rapid pace. They’ve never looked back.

BLONDIE ARE now in an excellent position to consolidate their success. Thanks to Debbie’s distinctive voice (not to mention her looks) and Jimmy Destri’s instantly-recognisable keyboard work, they have a unique sound well matched to their ability to turn out instantly commercial singles.
Along with acts like Elvis Costello, The Jam and Buzzcocks, Blondie have put new life into pop singles.