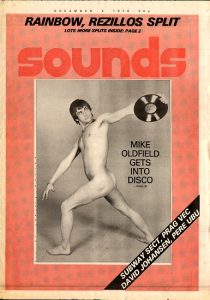 BLONDIE PLUGGED: More TV exposure for young Debbie Harry and Co. when a character in ‘Private View’, last Tuesday evening’s play on BBC1, opened proceedings by playing the Blondie group’s ‘Plastic Letters’ whilst examining sleeve of the same in glorious close-up. We don’t know if any sideswipe was intended but the playlet turned out to be a satire on bourgeois couple whose lives centred around the ownership of countless pretty but vacant objects.
Whatever, the double-header signed off to the strains of La Harry’s ‘I Didn’t Have The Nerve To Say No’. 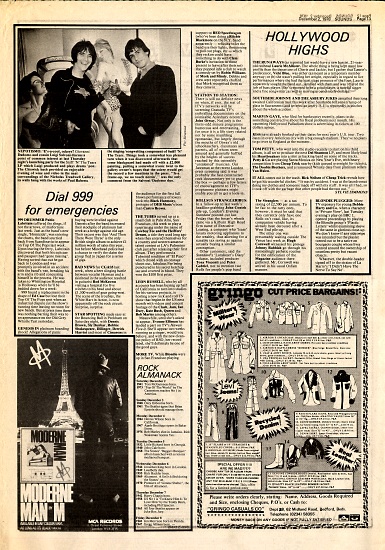 THOUGH DEBORAH Harry came decked out in Nancy Sinatra black boots made for walking, ready to walk all over the Palladium audience, all this crowd wanted was to shove a picture frame around her and have (you should excuse the expression) ‘AN ART EXPERIENCE’.
Face it, Debbie and co. at their best are a perfect Sixties screamybopper band, the kind that should inspire teens to force their parents do drive them out to the local concert vomatorium where they can madly dance the night away. Instead, the New York crowd here sat with clenched jaws, quietly observing the manic muscular dystrophy dancing of Deborah Harry, missing out on the gleeful fun of ‘Hanging On The Telephone’ or ‘Fan Mail’.
Of course, all the blame for this frigid atmosphere should not be thrust on to the crowd. Debbie’s band (as they will forever be known) seem to play in different time zones, with no focus to the sound. Most offensive is the downplaying of the brilliant ice-skating rink organ; the most important instrument in the band during such Sixties camp-outs as ‘In The Sun’. When the band first used to play CBGB’s, the organ almost beat out Debbie’s kitschy make-up for sheer humour. With it’s low-profile here, 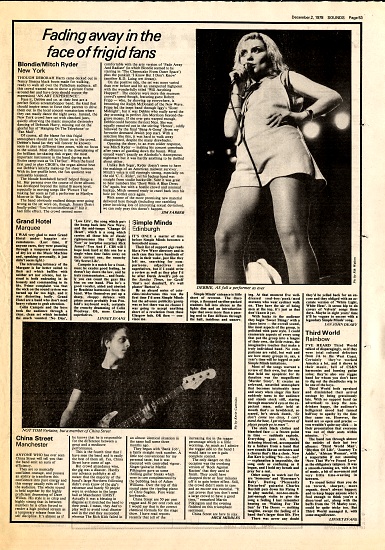 the fun quotient was noticeably lessened.
The blonde bombshell herself helped things a bit. Her persona over the course of three albums has developed beyond the initial B movie level, especially in moving songs like ‘Picture This’ making her seem as full a performer as Marilyn Monroe in ‘Bus Stop’.
The band obviously realised things were going wrong as the set wore on, though. Jimmy Destri finally yelled “You’re too intellectual!” but it had little effect. The crowd seemed more comfortable with the arty version of ‘Fade Away And Radiate’ (in which Blondie seemed to be starring in ‘The Cheesecake From Outer Space’) plus the punkish ‘I Know But I Don’t Know’ (another R.D. Laing wet dream).
On the positive side, the set was more varied than ever before and hit an unexpected highpoint with the wonderfully titled ‘Will Anything Happen?’. The encores were more this museum crowd’s speed though, featuring guest Robert Fripp – who, by showing up everywhere, is becoming the Ralph McDonald of the New Wave. Fripp led the inept band though Iggy’s ‘Sister Midnight’, but it was Debbie who really saved the day crooning in perfect Jim Morrison beyond-the-grave moans. If she ever gets warped enough, Debbie could become the next Nico. She was equally ennui-ed out in the stirring ‘Heroes’, oddly followed by the final ‘Bang-A-Gong’ (from my favourite deceased Jewish pop star). With a selection like this, it was hard to walk away disappointed, despite the many drawbacks.
Opening the show, to an even colder response, was Mitch Ryder – making his concert comeback after years of guzzling down the booze. What ensued wasn’t exactly an Alcoholic’s Anonymous nightmare but it was hardly anything to be thrilled about either.
Unlike Bob Seger, Ryder doesn’t seem to have the makings of an American midwest survivor. Mitch’s voice is still rippingly strong, especially on the old ‘C. C. Rider’, yet his backup band was straight from studio hacksville. Sure it was great to hear numbers like ‘Devil With A Blue Dress On’ again, but with a hostile crowd and minimal backup, Mitch seemed ready to crawl back into his hole (or bottle) once again.
With some of the more promising new material delivered here though (including one rambling piece involving lots of interesting sexual deviation), we can only prey this doesn’t happen.
JIM FARBER