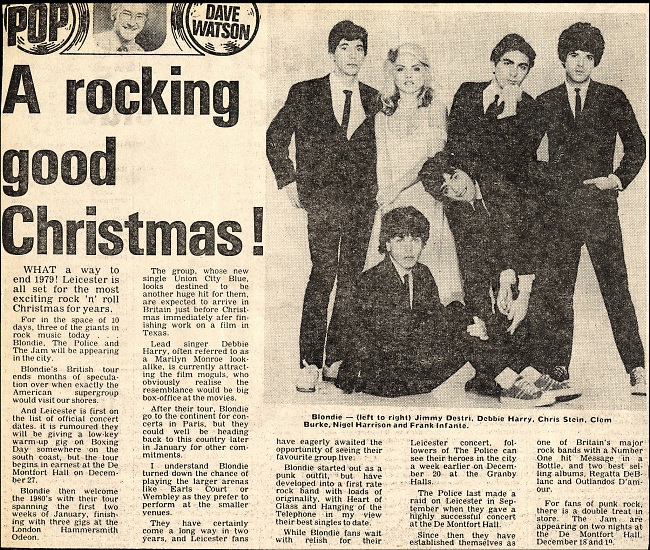 WHAT a way to end 1979! Leicester is all set for the most exciting rock ‘n’ roll Christmas for years.
For in the space of 10 days, three of the giants in rock music today… Blondie, The Police and The Jam will be appearing in the city.
Blondie’s British tour ends months of speculation over when exactly the American supergroup would visit our shores.
And Leicester is first on the list of official concert dates. It is rumoured they will be giving a low-key warm-up gig on Boxing Day somewhere on the south coast, the the tour begins in earnest at the De Montfort Hall on December 27.
Blondie then welcome the 1980’s with their tour spanning the first two weeks of January, finishing with three gigs at the London Hammersmith Odeon.
The group, whose new single Union City Blue, looks destined to be another huge hit for them, are expected to arrive in Britain just before Christmas immediately after finishing work on a film in Texas.
Lead singer Debbie Harry, often referred to as Marilyn Monroe lookalike, is currently attracting the film moguls, who obviously realise the resemblance would be big box-office at the movies.
After their tour, Blondie go to the continent for concerts in Paris, but they could well be heading back to this country later in January for other commitments.
I understand Blondie turned down the chance of playing the larger arenas like Earls Court or Wembley as they prefer to perform at the smaller venues.
They have certainly come a long way in two years, and Leicester fans have eagerly awaited the opportunity of seeing their favourite group live.
Blondie started out as a punk outfit, but have developed into a first rate rock band with loads of originality, with Heart of Glass and Hanging on the Telephone in my view their best singles to date.
While Blondie fans wait with relish for their Leicester concert, followers of The Police can see their heroes in the city a week earlier on December 20 at the Granby Halls.
The Police last made a raid on Leicester in September when they gave a highly successful concert at the De Montfort Hall.
Since then they have established themselves as one of Britain’s major rock bands with a Number One hit Message in a Bottle, and two best selling albums, Regatta DeBlanc and Outlandos D’amour.

For fans of punk rock, there is a double treat in store. The Jam are appearing on two nights at the De Montfort Hall December 18 and 19.