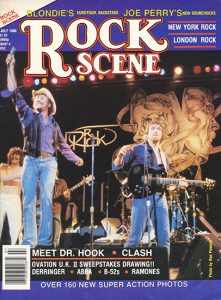 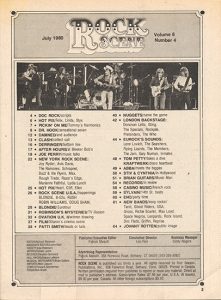 BLONDIE is on hand to commemorate the release of the soundtrack lp for
the movie ‘American Gigolo’ to which they sing the theme song. In the pic are Clem Burke, Frank Infante, Jimmy Destri, Chris Stein, Debby Harry, producer Giorgio Moroder, film’s star Richard Gere, and film’s director Paul Schrader.

Fame and good fortune awaited Blondie throughout Europe on their most recent tour. Not only has the band struck it big in the USA, but just about everywhere else fans are lining up to spend the evening with Debbie Harry and the rest of the Blondie band. 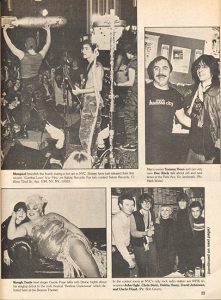 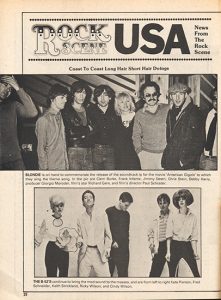 Debby relaxes as she travels through Europe to the next show

Signing autographs for fans is all part of a day’s stroll down the ancient streets of Europe.

In Glasgow Debbie compares hem lines with a couple of local residents.

Blondie gets the way smoothed for them by hardworking management team members Frank Scinlaro and Denny Vosburgh. 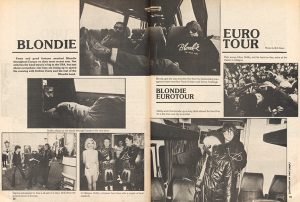 Mob scenes follow Debby and the band as they arrive at the theater in Glasgow.

Debbie and Chris bundle up as they climb aboard the band bus for a trip from one city to another. 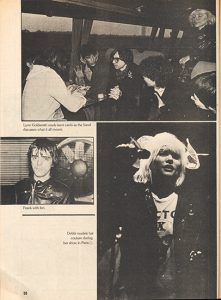 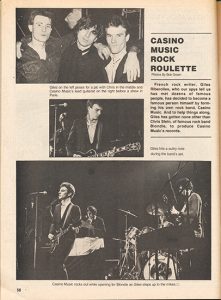 Lynn Goldsmith reads tarot cards as the band discusses what it all means.

Debbi models hat couture during her show in Paris.

French rock writer, Giles Riberolles, who our spys tell us has met dozens of famous people, has decided to become a famous person himself by forming
his own rock band, Casino Music. And to help things along, Giles has gotten none other than Chris Stein, of famous rock group Blondie, to produce Casino Music’s records.

Giles on the left poses for a pic with Chris in the middle and Casino Music’s lead guitarist on the right before a show in Paris.

Casino Music rocks out while opening for Blondie as Giles steps up to the mikes.