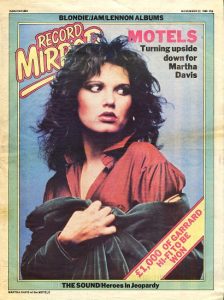 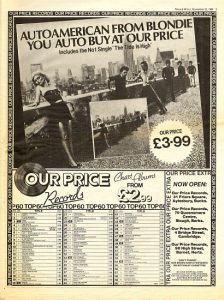 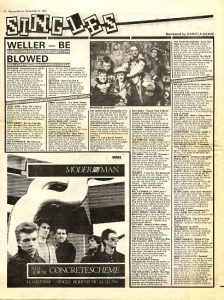 THE PARAGONS. U-ROY
‘The Tide Is High’ (Virgin)
Two versions of the Number One song, both infinitely better than Blondie’s. Funnily enough I can’t tell the difference between the Paragons and U-Roy, until the latter starts toasting.

GEE, THESE Americans. Make ’em stars, get them in with Andy Warhol and the rest of the Big Apple’s hip intelligentsia and they’re ripe for anything. From flirting with big – time movies and small-time jazz to toying with the past under the misconception that they’re making music for the present.
In mining a rich pop vein, Blondie have never been the world’s greatest innovators, so this is probably intended as their turning point, an attempt to get to grips with summat fresh. Unfortunately, much of the album doesn’t come over this way at all and just sounds cliched and contrived. Cynical, even, from the marketing of the record like a car to the chunk of grandiose film music that sets the daunting scene. 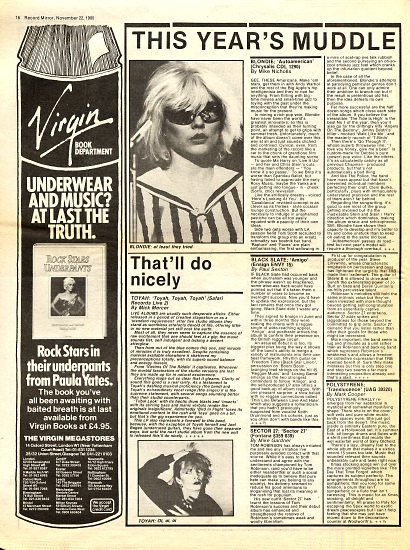 To quote Ms Harry on ‘Live It Up’ – and her and Chris Stein’s cuts are the main offenders – “You know it’s so passe.” To we Brits it’s worse than Spandau Ballet, but having failed to appreciate the early Roxy Music, maybe the Yanks are just getting into tongue – in – cheek (Sorry, chic) revivalism.
Like the artifically dreamy – voiced ‘Here’s Looking At You’. Its ‘Casablanca’ revisited concept is as clever as its thirties – style cocktail lounge construction. But the necessity to indulge in unashamed pastiche can be all too easily equated with a paucity of their own ideas.
Side two gets worse with LA session fiend Tom Scott recruited to transform the group into an ersatz schmaltzy sax beatnik bar band. ‘Rapture’ and ‘Faces’ are plain embarrassing, the first wallowing in a mire of scat-rap jive talk rubbish and the second purveying an oh-so-cool smokey jazz feel which cranks up the infuriation quotient beyond belief.
In the case of all the aforementioned, Blondie’s attempts at parodying particular genres don’t work at all. One can only admire their ambition to branch out but if the result is pretentious old hat, then the idea defeats its own purpose.
Far more successful are the half dozen songs which close each side of the album. If you believe the irresistible ‘The Tide Is High’ is the best No 1 of the year, then you’ll also go for the driftingly riffy ‘Angels On The Balcony’, Jimmy Destri’s killer – hooked ‘Walk Like Me’, and the masterly raunch of ‘T-Birds’.
Then there’s ‘Go Through It’, whose superb throwaway line, “I love you honey, give me a beer” is custom-made for Debbie’s pure (power) pop voice. Like the others, it’s as calculatedly catchy as all previous Chapman – produced products, but that’s not automatically a bad thing.
And like The Police, the band have mass appeal but that hasn’t prevented individual members perfecting their craft. Clem Burke, particularly, plays with immaculately understated precision and the rest of them aren’t far behind.
Regarding the songwriting, it’s good to see most of the group getting involved but it’s the inadvisable Stein and Stein/Harry direction which dominates, making the album erratic and schizophrenic. Still, Blondie have shown their capacity to develop and it’s better to try and come unstuck than to keep on eating to the same old beat.
‘Autoamerican’ passes its road test but next year’s model will require a thorough overhaul. 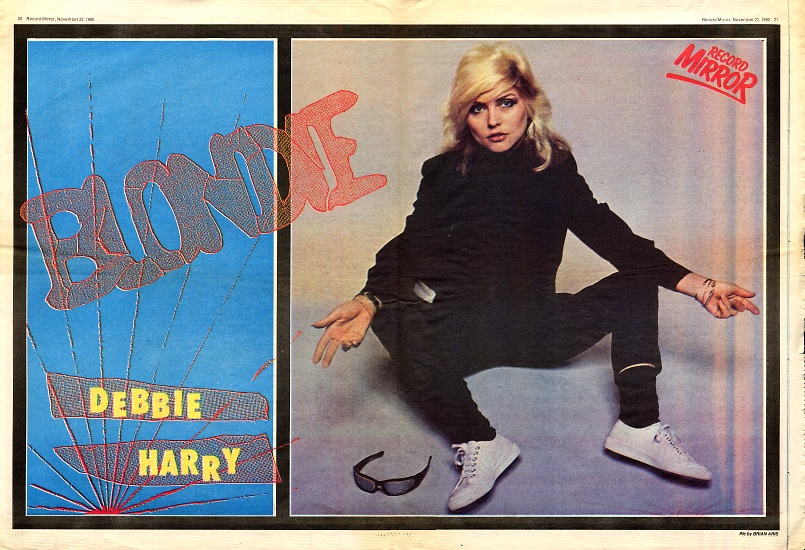