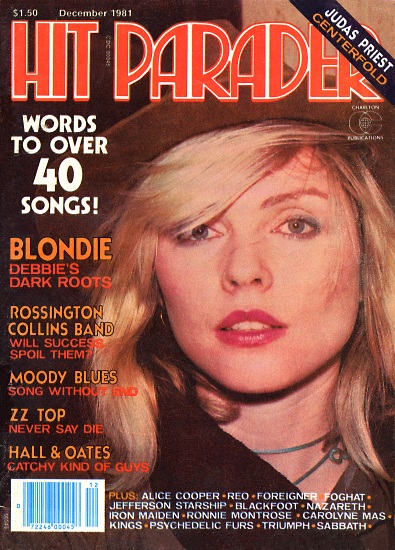 When we last left Blondie’s Chris Stein and Deborah Harry back in December, Autoamerican had just been released. Owlishly-wise Chris was predicting it would get played on all the black radio stations. Sure enough, with two chart-topping singles, one reggae-based (The Tide Is High), the other, rap, born on the South Bronx streets, (Rapture) Autoamerican proved Blondie’s crossover potential on the street, where it counts.
Flushed with their successful forays into disco and rhythm and blues, Harry and Stein sought a fresh approach for Debbie’s debut solo LP. For production, they picked Chic’s Nile Rodgers and Bernard Edwards. The result, KooKoo, hits the album-oriented rock world like a blast of fresh air.

The cover is a startling photo of Debbie with hair pulled back and grown out to her natural shade of mousey brown. It was designed by the great Swiss artist Hans R. (Alien, Brain Salad Surgery) Giger, whose final touch was four large acupuncture needles piercing Debbie’s face. The full-size blow-up of the album jacket is the first thing that greets me as I enter their apartment. I wondered if its starkness was an attempt by Debbie to de-glamorize her image as Blondie.
“We did want to cut down a little on the exploitation end of it,” explains Chris Stein, adjusting his horn rims. “Maybe it means Debbie’s just sick of her face. It’s hard to say, but I’ve never liked the merchandising of Blondie and all that crap. We’re just trying to cut it down a bit.”
Chris insists Blondie is still a group, even though they have no set plans to tour together. Most of the rumors you hear these days center around Chris and Debbie going on the road with Nile, Bernard, drummer Tony Thompson and the rest of the Chic crew. After hearing KooKoo, such talk begins to make a lot of sense.
Instead of the expected funk/disco excursions that the Chic/Blondie collaboration was supposed to produce, KooKoo proves that both parties ended up influencing the others fairly equally. Rodgers and Edwards contribute pop gems like Backfired (the first single), Surrender and the stunning ballad Now I Know You Know, perfectly tailored for Deborah’s sultry, little-girl-grown-up vocals. On the other hand, the Stein/Harry forays into rap (Military Rap), reggae (Innercity Spillover) and funk/disco (Jump Jump, with Devo’s Gerry Casale and Mark Mothersbaugh) are right on the mark, thanks to the instrumental prowness of Nile Rodgers’ guitar riffs, Bernard Edwards’ steady bass and Tony Thompson’s precise drumming.
“It was a total collaboration,” agrees Stein. “The stuff that I wrote was very consciously for Debbie and them. They were doing the same thing – writing for themselves and Debbie.” 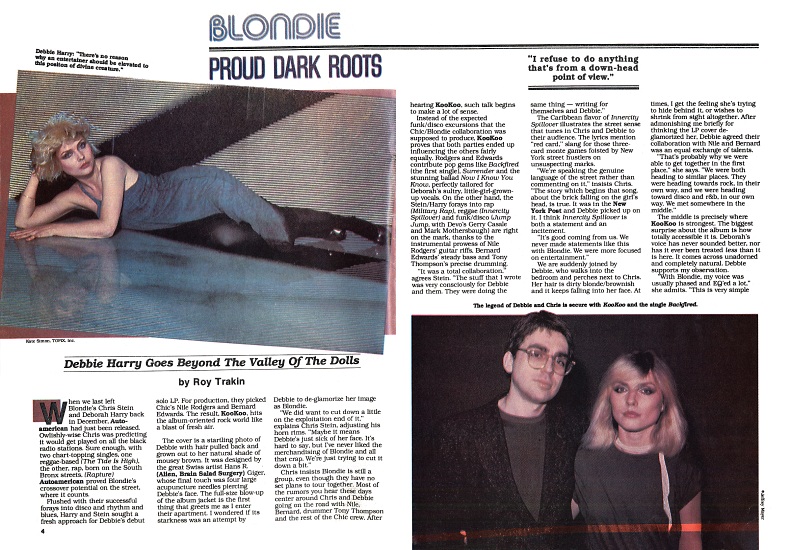 The Caribbean flavor of Innercity Spillover illustrates the street sense that tunes in Chris and Debbie to their audience. The lyrics mention “red card,” slang for those three-card monte games foisted by New York street hustlers on unsuspecting marks.
“We’re speaking the genuine language of the street rather than commenting on it,” insists Chris.
“The story which begins that song, about the brick falling on the girl’s head, is true. It was in the New York Post and Debbie picked up on it. I think Innercity Spillover is both a statement and an incitement.
It’s good coming from us. We never made statements like this with Blondie. We were more focused on entertainment.”
We are suddenly joined by Debbie, who walks into the bedroom and perches next to Chris. Her hair is dirty blonde/brownish and it keeps falling into her face. At times, I get the feeling she’s trying to hide behind it, or wishes to shrink from sight altogether. After admonishing me briefly for thinking the LP cover de-glamorized her, Debbie agreed their collaboration with Nile and Bernard was an equal exchange of talents.
“That’s probably why we were able to get together in the first place,” she says. “We were both heading to similar places. They were heading towards rock, in their own way, and we were heading toward disco and r&b, in our own way. We met somewhere in the middle.”
The middle is precisely where KooKoo is strongest. The biggest surprise about the album is how totally accessible it is. Deborah’s voice has never sounded better, nor has it ever been treated less than it is here. It comes across unadorned and completely natural. Debbie supports my observation.
“With Blondie, my voice was usually phased and EQ’ed a lot,” she admits. “This is very simple and straightforward. This is what I really sound like, what people hear in concert. With Blondie, everything was compressed more.”
That vocal openness is paralleled by an emotional directness that comes across on such personal songs as the gently psychedelic angloid-pop of Chrome, where Debbie talks of shedding images like a chameleon.
“Yeah, I’m not in character on this LP,” suggests Debbie as Chris interrupts with, “We never analyze our songs until later, though.”
“It’s just a fantasy based on Truman Capote’s book” (Music For Chameleons), says Debbie.

Does Debbie feel shackled to the image of Blondie as it’s written about in the media?
“I don’t think what’s in the press has anything to do with Blondie,” says Debbie. “What I dislike is that people 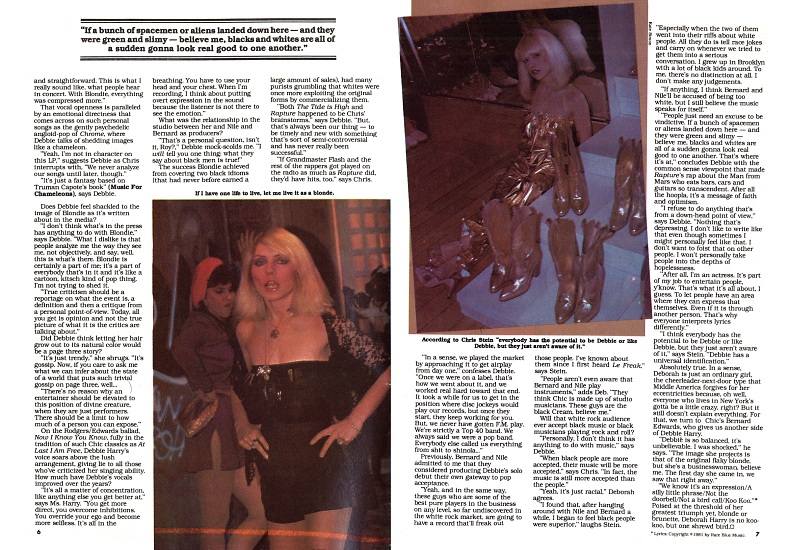