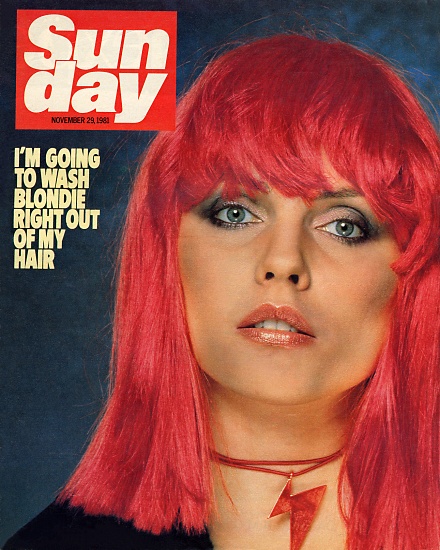 29th November 1981
BLONDIE IN
DISGUISE
Written By: Michael Cable
Photography By: Brian Aris
As one of the tracks on her latest album, The Best of Blondie, reveals, Debbie Harry is very much a Sunday Girl. But the singer once hailed as a re-incarnate Marilyn Monroe confesses to the bluest of Monday morning blues at the hostile reactions by fans at any effort to abandon her peroxide image and to broaden her career as a solo singer and actress.
Debbie Harry darted out into the New York rush-hour traffic, dancing up and down and waving frantically in a vain effort to flag down the only vacant yellow cab on the Avenue of the Americas.
The driver accelerated past, flicking a contemptuous glance at her anonymous-looking, leather-jacketed figure and deciding instantly that this was not a fare worth stopping for when richer pickings were waiting uptown in the drizzle.
Debbie dodged back to the safety of the kerb with a muttered curse. It was one of those moments when not being recognised as the world’s No 1 pop pin-up did not make life any easier for the star who until recently, had one of the most familiar faces in rock.
Since she washed Blondie right out of her hair along with the peroxide that helped to get her dubbed “the Marilyn Monroe of pop”, things have not been running quite as smoothly for her. Her debut solo album Koo Koo – with its controversial sleeve showing her face pierced through with fierce-looking needles – looks like being a flop.
And both fans and critics have reached bitchily to her attempts to break out from the restrictions of the Blondie mould and broaden her career.
“I knew this was likely to happen,” she says with calm resignation. “When you make a major change like this, people are always a little bit wary. It takes them a while to accept it.
“I’m not too worried. I have been looking forwards to doing something different. I like change and I love getting fresh ideas and a new look. Of course, when you’ve had a certain amount of success it is logical that you should want to stick with the winning formula.
“But I think it is more important to be stylish. And the only way to be stylish is to be continually moving on, doing something new.
“Most of the time it is not accepted right off. It was the same with Blondie in the beginning. It took three years 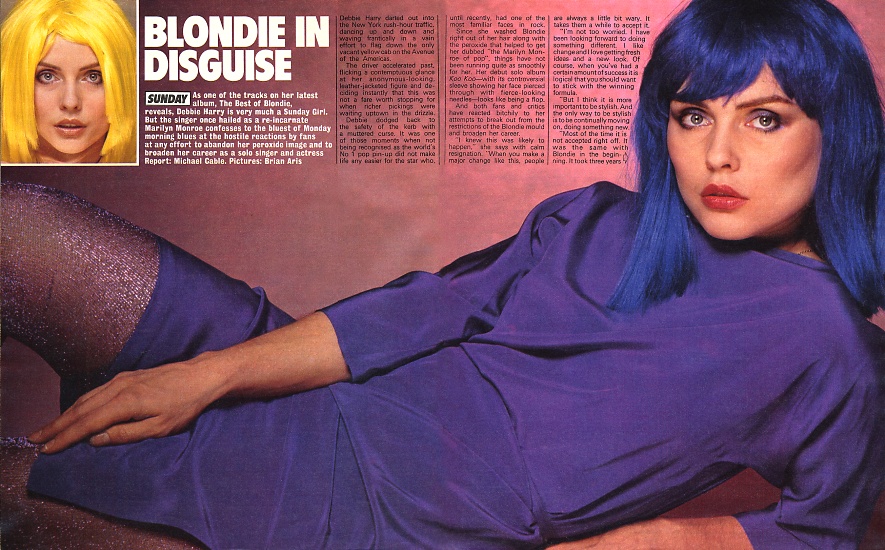 before the American audiences accepted us. It took less time in England – but everything happens faster there.”
What has taken Debbie by surprise is the depth of hostility she has faced since she branched out on her own. “I should have thought the fans would be happy to know I have a lot more to offer, but instead they seem to be obsessed with the idea that I’ve deserted the group. I suppose I can understand it in a way.
“Nobody wants to lose something or somebody they love. I feel just the same as they do about Blondie. I don’t want to lose her – and I won’t.
“I haven’t by any means given up the group altogether – in fact, we shall be doing a new album in the New Year. I’m just expanding. I want to do a hundred different things.
“But obviously I’ve got to be more careful with people’s feelings and make sure I explain myself more fully. My mistake was that I just sort of said I was going to try something new and then ran straight off and changed into it.”
A Best of Blondie album has been released to keep fans happy. But part of the reason for the new direction is that Debbie actually felt that the public was getting bored with Blondie. And, at 35, she felt that the time had come for her to be her age a bit more.
“Blondie is a very girlish thing – very poppy,” she explains. On Koo Koo I hopefully show a lot more depth and feeling. The mood is meant to be more serious, more womanly.
“I am very pleased with the album. I got to do a lot of stuff that, as a singer, I needed to do to advance myself. But it has certainly given me a lot of problems.”
The main one concerned the eye-catching sleeve designed by Han Giger – who was responsible for some of the horrific special effects in the film Alien.
Some stores refused to display the record, and there were problems with advertising.
“A lot of mums and dads probably wouldn’t want to buy it for their little kids who, let’s face it, make up a big part of the Blondie audience. This was something I didn’t really consider when we did the sleeve.
“I just wanted to do something that was visually away from Blondie. I am a little disappointed that people who are supposedly intelligent and sophisticated can’t accept it for what it is – art, science fiction and fantasy.”
As part of her new solo image Debbie disguises herself in a selection of lurid wigs – shocking pink, green, blue, black and yellow. “I’ve had a lot of laughs out of it and the kids really like it.”
Her acting career is another example of how she insists on doing things her way. Instead of accepting one of the glittering star parts that were pressed on her, she chose to make her film debut in a very down-beat role as a drab housewife in the movie Union City Blue. 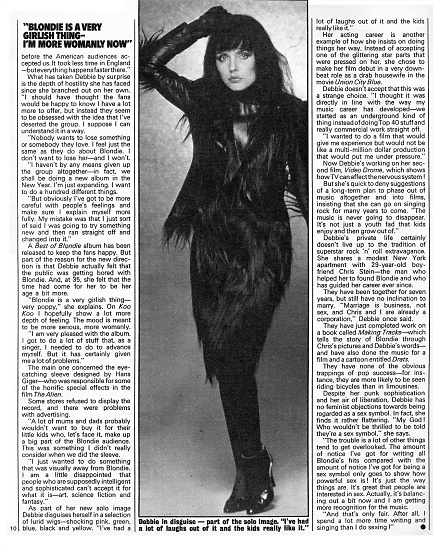 Debbie doesn’t accept that this was a strange choice. “I thought it was directly in line with the way my music career has developed – we started as an underground kind of thing instead of doing Top 40 stuff and really commercial work straight off.
“I wanted to do a film that would give me experience but would not be like a multi-million dollar production that would put me under pressure.”
Now Debbie’s working on her second film, Video Drome, which shows how TV can affect the nervous system!
But she’s quick to deny suggestions of a long-term plan to phase out of music altogether and into films, insisting that she can go on singing rock for many years to come. “The music is never going to disappear. It’s not just a youth fad that kids enjoy and then grow out of.”
Debbie’s private life certainly doesn’t live up to the tradition of superstar rock’n’roll extravagance. She shares a modest New York apartment with 29-year-old boyfriend Chris Stein – the man who helped her to found Blondie and who has guided her career ever since.
They have been together for seven years, but still have no inclination to marry. “Marriage is business, not sex, and Chris and I are already a corporation,” Debbie once said.
They have just completed work on a book called Making Tracks – which tells the story of Blondie through Chris’s pictures and Debbie’s words – and have also done music for a film and a cartoon entitled Drats.
They have none of the obvious trappings of pop success – for instance, they are more likely to be seen riding bicycles than in limousines.
Despite her punk sophistication and her air of liberation, Debbie has no feminist objections towards being regarded as a sex symbol. In fact, she finds it rather flattering. “My God! Who wouldn’t be thrilled to be told they’re a sex symbol,” she says.
“The trouble is a lot of other things tend to get overlooked. The amount of notice I’ve got for writing all Blondie’s hits compared with the amount of notice I’ve got for being a sex symbol only goes to show how powerful sex it! It’s just the way things are. It’s great that people are interested in sex. Actually, it’s balancing out a bit now and I am getting more recognition for the music.
“And that’s only fair. After all, I spend a lot more time writing and singing than I do sexing!”