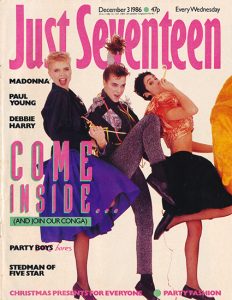 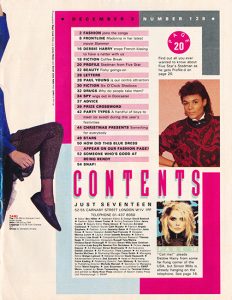 “Call me!” pleads Debbie Harry from some far-flung corner of the USA, but Simon Mills is already hanging on the telephone. See page 16.

DEBBIE HARRY
IN THE USA

SIMON MILLS HAS HER PHONE NUMBER IN HIS LITTLE BLACK BOOK!

I can’t believe it! She is actually on the other end of the telephone line! The girl who was every teenage boy’s fantasy back in the mid ’70s. The girl old enough to be your mum but who you fancied the pants off anyway. The girl who used to sing out of the side of her mouth. The girl who did funny little dances with a length of chiffon 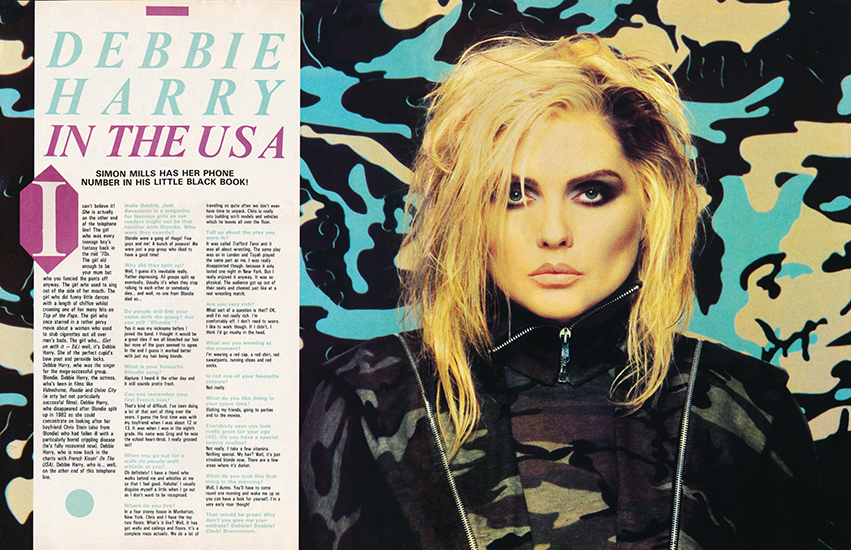 Hello Debbie. Just Seventeen is a magazine for teenage girls so our readers might not be that familiar with Blondie. Who were they exactly?
Blondie were a gang of thugs! Five guys and me. A bunch of poseurs! We were just a pop group who liked to have a good time!

Why did they split up?
Well, I guess it’s inevitable really. Rather depressing. All groups split up eventually. Usually it’s when they stop talking to each other or somebody dies… and well, no one from Blondie died so…

Do people still link your name with the group? Are you still “Blondie”?
Yes it was my nickname before I joined the band. I thought it would be a great idea if we all bleached our hair but none of the guys seemed to agree. In the end I guess it worked better with just my hair being blonde.

What is your favourite Blondie song?
Rapture. I heard it the other day and it still sounds pretty fresh.

Can you remember you first French kiss?
That’s kind of difficult. I’ve been doing a lot of that sort of thing over the years. I guess the first time was with my boyfriend when I was about 12 or 13. It was when I was in the eighth grade. His name was Greg and he was the school heart-throb. I really grossed out!

When you go out for a walk do people wolf whistle at you?
Oh definitely! I have a friend who walks behind me and whistles at me so that I feel good. Hahaha! I usually disguise myself a little when I go out as I don’t want to be recognised.

Where do you live?
In a four storey house in Manhattan, New York. Chris and I have the top two floors. What’s it like? Well, it has got walls and ceilings and floors. It’s a complete mess actually. We do a lot of travelling so quite often we don’t even have time to unpack. Chris is really into building sci-fi models and vehicles which he leaves all over the floor.

Tell us about the play you were in?
It was called Trafford Tanzi and it was all about wrestling. The same play was on in London and Toyah played the same part as me. I was really disappointed though, because it only lasted one night in New York. But I really enjoyed it anyway. It was so physical. The audience got up out of their seats and cheered just like at a real wrestling match.

Are you very rich?
What sort of question is that? OK, well I’m not really rich. I’m comfortably off. I don’t need to worry. I like to work though. If I didn’t, I think I’d go mushy in the head.

What are you wearing at the moment?
I’m wearing a red cap, a red shirt, red sweatpants, running shoes and red socks.

Is red one of your favourite colours?
Not really.

What do you like doing in your spare time?
Visiting my friends, going to parties and to the movies.

Everybody says you look really great for your age (42). Do you have a special beauty routine?
Not really. I take a few vitamins. Nothing special. My hair? Well, it’s just streaked blonde now. There are a few areas where it’s darker.

What do you look like first thing in the morning?
Well, I dunno. You’ll have to come round one morning and wake me up so you can have a look for yourself. I’m a very early riser though!

That would be great! Why don’t you give me your address? Debbie? Debbie? Click! Brrrrrrrrrrr. 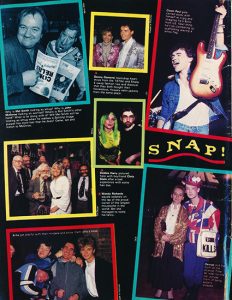 Debbie Harry pictured here with boyfriend Chris Stein after a bad experience with some hair dye.