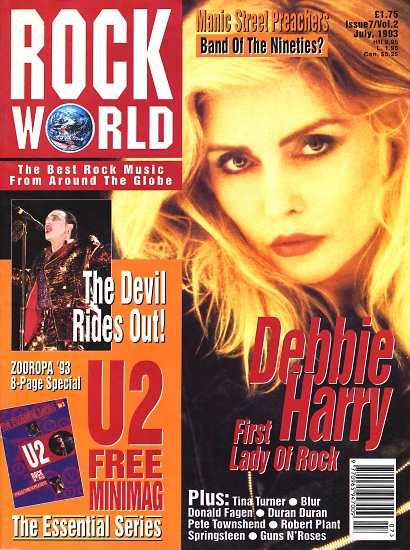 DEB’S DELIGHT
This month sees the return of one of rock’s greatest legends. We track down Debbie – sorry, Deborah – Harry in New York for an exclusive interview as she prepares for the release of a brand new album ‘Debravation’, which recalls the hazy, crazy days of Blondie while taking her firmly into the Nineties. She may also be touring soon so WATCH THIS SPACE!

Picture this…
DEBBIE HARRY, ultimate pop queen, prototype rock goddess, occasional actress and Madonna’s role model, began to grow up and got lost somewhere in the Eighties. Adoring disciple MARCEL ANDERS flies to NEW YORK to track her down… and discovers her in the throes of a comeback.

She started as a shady barmaid, tried her luck as a Playboy bunnygirl and finally rose – at the not quite so tender age of 30 – to the status of idol of the New York new wave high society. 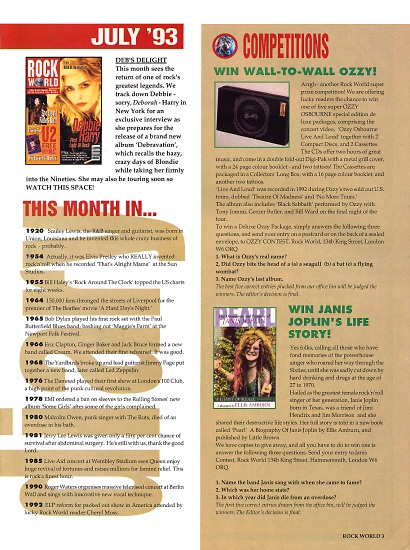 Yep, welcome back Deborah Harry, platinum blonde, pin-up-dream, occasional actress and stunning singer. In ten glittering years with Blondie she was the undisputed queen of pop, scoring hit after hit, selling more than 20 million albums around the world and five Number One singles in Britain alone.
Sex’n’sleaze’n’rock’n’roll? Madonna looks like a blushing virgin alongside Harry, who could also teach La Ciccone a thing or two about making classic records too.
Pursuing a solo career since the mid-Eighties, her output has been both sporadic and erratic. That irresistibly brazen glamour didn’t seem so much fun any more and she appeared to lose interest in the whole game. Her public appearances have become fewer and fewer as she assumed a Garbo-esque role as one of the great lost goddesses of rock But here she is, aged 48 but still looking special, venturing one more time into rock music. Her new album ‘Debravation’, her fourth co-production with long-term partner and former Blondie guitarist Chris Stein, is obviously a crucial one. Her legend has never been greater as the new gods like Suede go delving back to the Seventies for some kind of romantic inspiration, and you wonder why she’d want to risk that kind of permanent sainthood in pursuit of what? Surely not cash. Definitely not credibility. After a creative crisis in the Eighties, another false start could bury her forever and worse, expose her to ridicule as a comic-cut ageing 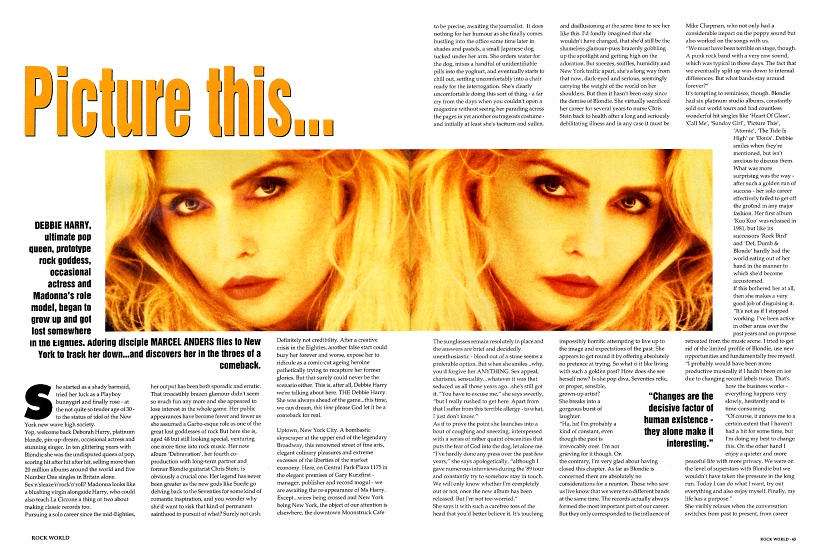 heroine pathetically trying to recapture her former glories. But that surely could never be the scenario either. This is, after all, Debbie Harry we’re talking about here. THE Debbie Harry. She was always ahead of the game… this time, we can dream, this time please God let it be a comeback for real.

Uptown, New York City. A bombastic skyscraper at the upper end of the legendary Broadway, this renowned street of fine arts, elegant culinary pleasures and extreme excesses of the liberties of the market economy. Here, on Central Park Plaza 1175 in the elegant premises of Gary Kurzfirst – manager, publisher and record mogul – we are awaiting the re-appearance of Ms Harry. Except… wires being crossed and New York being New York, the object of our attention is elsewhere, the downtown Moonstruck Cafe to be precise, awaiting the journalist. It does nothing for her humour as she finally comes bustling into the office some time later in shades and pastels, a small Japanese dog tucked under her arm. She orders water for the dog, mixes a handful of unidentifiable pills into the yoghurt, and eventually starts to chill out, settling uncomfortably into a chair ready for the interrogation. She’s clearly uncomfortable doing this sort of thing – a far cry from the days when you couldn’t open a magazine without seeing her parading across the pages in yet another outrageous costume – and initially at least she’s taciturn and sullen. 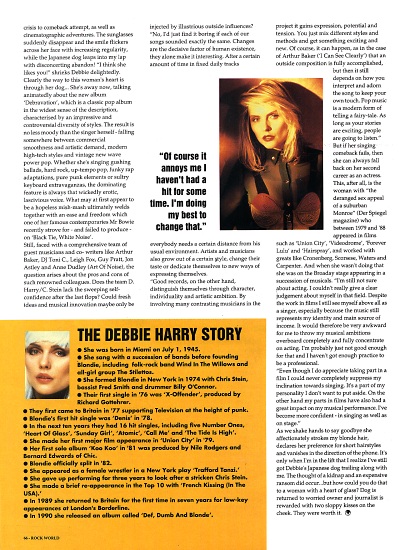 THE DEBBIE HARRY STORY
She was born in Miami on July 1, 1945.
She sang with a succession of bands before founding Blondie, including folk-rock band Wind In The Willows and all-girl group The Stilettos.
She formed Blondie in New York in 1974 with Chris Stein, bassist Fred Smith and drummer Billy O’Connor.
Their first single in ’76 was ‘X-Offender’, produced by Richard Gottehrer.
They first came to Britain in ’77 supporting Television at the height of punk.
Blondie’s first hit single was ‘Denis’ in ’78.
In the next ten years they had 16 hit singles, including five Number Ones, ‘Heart Of Glass’, ‘Sunday Girl’, ‘Atomic’, ‘Call Me’ and ‘The Tide Is High’.
She made her first major film appearance in ‘Union City’ in ’79.
Her first solo album ‘Koo Koo’ in ’81 was produced by Nile Rodgers and Bernard Edwards of Chic.
Blondie officially split in ’82.
She appeared as a female wrestler in a New York play ‘Trafford Tanzi.’
She gave up performing for three years to look after a stricken Chris Stein.
She made a brief re-appearance in the Top 10 with ‘French Kissing (In The USA).’
In 1989 she returned to Britain for the first time in seven years for low-key appearances at London’s Borderline.
In 1990 she released an album called ‘Def, Dumb And Blondie’. 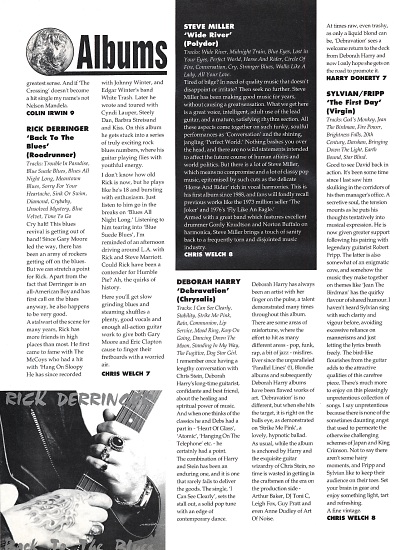 (Chrysalis)
Tracks: I Can See Clearly, Stability, Strike Me Pink, Rain, Communion, Lip Service, Mood Ring, Keep On Going, Dancing Down The Moon, Standing In My Way, The Fugitive, Dog Star Girl.
I remember once having a lengthy conversation with Chris Stein, Deborah Harry’s long-time guitarist, confidante and best friend, about the healing and spiritual power of music. And when one thinks of the classics he and Debs had a part in – ‘Heart Of Glass’, ‘Atomic’, ‘Hanging On The Telephone’ etc. – he certainly had a point. The combination of Harry and Stein has been an enduring one, and it is one that rarely fails to deliver the goods. The single, ‘I Can See Clearly’, sets the stall out, a solid pop tune with an edge of contemporary dance. Deborah Harry has always been an artist with her finger on the pulse, a talent demonstrated many times throughout this album. There are some areas of misfortune, where the effort to hit as many different areas – pop, funk, rap, a bit of jazz – misfires. Ever since the unparalleled ‘Parallel Lines’ (!), Blondie albums and subsequently Deborah Harry albums have been flawed works of art. ‘Debravation’ is no different, but when she hits the target, it is right on the bulls eye, as demonstrated on ‘Strike Me Pink’, a lovely, hypnotic ballad. As usual, while the album is anchored by Harry and the exquisite guitar wizardry of Chris Stein, no time is wasted in getting in the craftsmen of the era on the production side – Arthur Baker, DJ Toni C, Leigh Fox, Guy Pratt and even Anne Dudley of Art Of Noise.
At times raw, even trashy, as only a liquid blond can be, ‘Debravation’ sees a welcome return to the deck from Deborah Harry and now I only hope she gets on the road to promote it.
HARRY DOHERTY 7