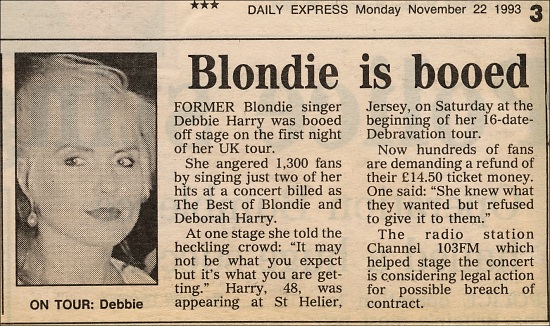 FORMER Blondie singer Debbie Harry was booed off stage on the first night of her UK tour.

She angered 1,300 fans by singing just two of her hits at a concert billed as The Best Of Blondie and Deborah Harry.

At one stage she told the heckling crowd: “It may not be what you expect but it’s what you are getting.” Harry, 48, was appearing at St Helier, Jersey, on Saturday at the beginning of her 16-date-Debravation tour.

Now hundreds of fans are demanding a refund of their £14.50 ticket money. One said: “She knew what they wanted but refused to give it to them.”

The radio station Channel 103FM which helped stage the concert is considering legal action for breach of contract.