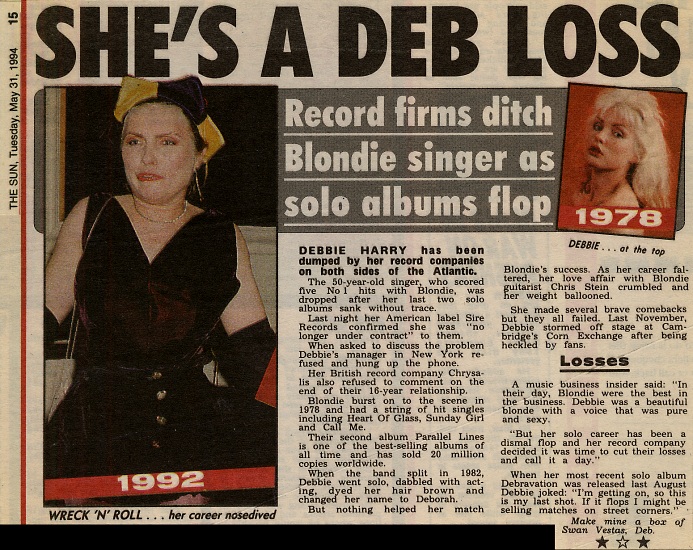 DEBBIE HARRY has been dumped by her record companies on both sides of the Atlantic.
The 50-year-old singer, who scored five No 1 hits with Blondie, was dropped after her last two solo albums sank without trace.
Last night her American label Sire Records confirmed she was “no longer under contract” to them.
When asked to discuss the problem Debbie’s manager in New York refused and hung up the phone.
Her British record company Chrysalis also refused to comment on the end of their 16-year relationship.
Blondie burst on to the scene in 1978 and had a string of hit singles including Heart Of Glass, Sunday Girl and Call Me.
Their second album Parallel Lines is one of the best-selling albums of all time and has sold 20 million copies worldwide.
When the band split in 1982, Debbie went solo, dabbled with acting, dyed her hair brown and changed her name to Deborah.
But nothing helped her match Blondie’s success. As her career faltered, her love affair with Blondie guitarist Chris Stein crumbled and her weight ballooned.
She made several brave comebacks but they all failed. Last November Debbie stormed off stage at Cambridge’s Corn Exchange after being heckled by fans.

Losses
A music business insider said: “In their day, Blondie were the best in the business. Debbie was a beautiful blonde with a voice that was pure and sexy.
“But her solo career has been a dismal flop and her record company decided it was time to cut their losses and call it a day.”
When her most recent solo album Debravation was released last August Debbie joked: “I’m getting on, so this is my last shot. If it flops I might be selling matches on street corners.”
Make mine a box of Swan Vestas, Deb.