29th November 2005 – Pages 20 + 21
VICTORIA NEWTON’S
bizarre
BLONDIE are being filmed during their current UK tour for a major warts-and-all documentary. The punk rockers, 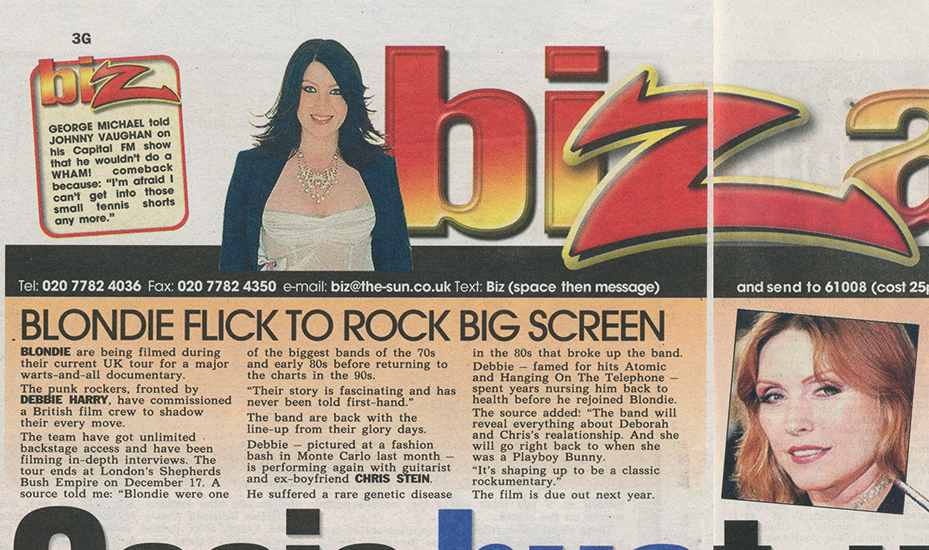 fronted by DEBBIE HARRY, have commissioned a British film crew to shadow their every move. The team have got unlimited backstage access and have been filming in-depth interviews. The tour ends at London’s Shepherds Bush Empire on December 17. A source told me: “Blondie were one of the biggest bands of the 70s and early 80s before returning to the charts in the 90s. “Their story is fascinating and has never been told first-hand.” The band are back with the line-up from their glory days. Debbie – pictured at a fashion bash in Monte Carlo last month – is performing again with guitarist and ex-boyfriend CHRIS STEIN. He suffered a rare genetic disease in the 80s that broke up the band. Debbie – famed for hits Atomic and Hanging On The Telephone – spent years nursing him back to health before he rejoined Blondie. The source added: The band will reveal everything about Deborah and Chris’s relationship. And she will go right back to when she was a Playboy Bunny. “It’s shaping up to be a classic rockumentary.” The film is due out next year.