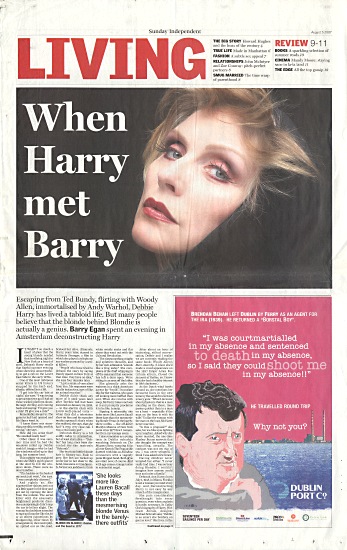 Escaping from Ted Bundy, flirting with Woody Allen, immortalised by Andy Warhol, Debbie Harry has lived a tabloid life. But many people believe that the blonde behind Blondie is actually a genius. Barry Egan spent an evening in Amsterdam deconstructing Harry.

IT WASN’T so much a heart of glass that the young blonde needed that terrifying night in New York as a heart of steel. Deborah Harry recalls that fateful summer evening when she tried, unsuccessfully, to get a cab on the Lower East Side in the early 1970s.
One of the most infamous serial killers in US history stopped by the kerb and, slimily, offered her a lift.
“I got into his car late at night,” she says. “I was trying to get across town and I had on these wicked platform shoes. He kept circling and coming back saying: ‘I’ll give you a ride! I’ll give you a ride.'”
Remarkably, she got in. The gates to hell had opened and Ms Harry went in.
“I knew there was something terribly, terribly, terribly wrong,” she says.
How did you sense that? “He smelled really bad.”
Other clues: it was summer time and he had the windows rolled up. Debbie couldn’t imagine why he had the windows rolled up in that long, hot summer heat.
This mystery was explained when she shot a quick glance at the door to roll the windows down. There were no door handles.
“The hackles on the back of my neck just went,” she says. “I was completely alarmed.”
And rightly so. She squeezed her skinny arm out of a little space in the door and got out by opening the door from the outside. The serial killer with the unusually heightened psychotic disorder unsurprisingly didn’t stop the car to let her alight. The woman he doubtless intended to rape and murder like the 30 or so others (sometimes by bludgeoning, other times by strangulation; then necrophilia) spilled out on the road, bruised but alive. (Bizarrely, Harry, years later, starred in Intimate Stranger, a film in which she played a telephone sex worker pursued by a serial killer.)
“People who have tried to debunk the story by saying Bundy wasn’t in New York at that time, they have no idea,” she says four decades later.
“I got a sense of very alien from him. My responses were totally instinctive, sort of like an animal reaction.”
Debbie didn’t think any more of it until years later after Terrible Ted had been executed on January 24th, 1989, – in the electric chair with 2,000 well-placed volts – when they did a television show on him and his macabre modus operandi: that’s when she realised, she says, that she had “a very, very close call. I was a real lucky girl”.
Deborah Harry is a bit sniffy today in Amsterdam, but at least she’s alive – “Debbie” has long since been discarded for the matronly “Deborah”.
Her two-tone bottle-blonde hair is history too. Fade to grey. Her feet are tucked up under her chair in the hotel, like some curmudgeonly, former sex goddess in thick white woolly socks and flat shoes that went out with the Cultural Revolution. 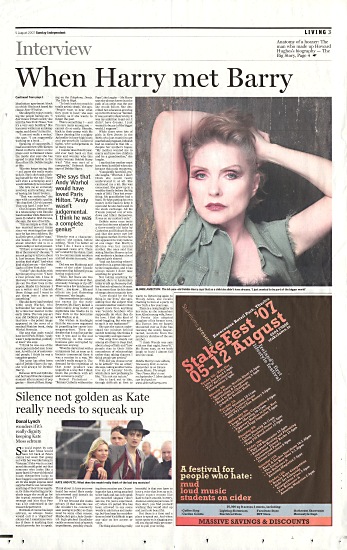