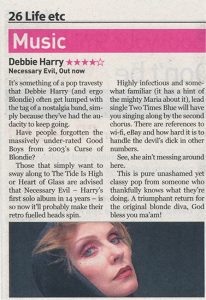 It’s something of a pop travesty that Debbie Harry (and ergo Blondie) often get lumped with the tag of a nostalgia band, simply because they’ve had the audacity to keep going.
Have people forgotten the massively under-rated Good Boys from 2003’s Curse of Blondie?
Those that simply want to sway along to The Tide Is High of Heart of Glass are advised that Necessary Evil – Harry’s first solo album in 14 years – is so now it’ll probably make their retro fuelled heads spin.
Highly infectious and somewhat familiar (it has a hint of the mighty Maria about it), lead single Two Times Blue will have you singing along by the second chorus. There are references to wi-fi, eBay and how hard it is to handle the devil’s dick in other numbers.
See, she ain’t messing around here.
This is pure unashamed yet classy pop from someone who thankfully knows what they’re doing. A triumphant return for the original blonde diva, God bless you ma’am!