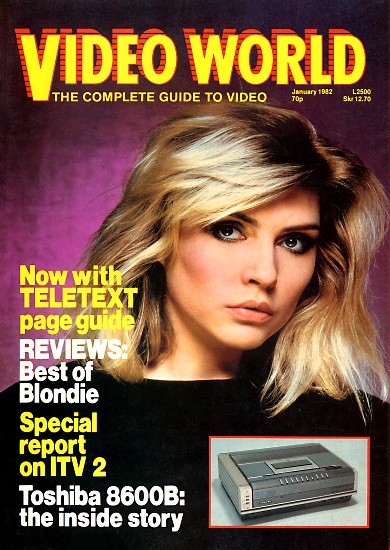 January 1982 – Page 60
Written by: Steven Littlejohns
REVIEW
THE BEST OF BLONDIE
1981 1hr
Distributed by Chrysalis Video on VHS/Beta at £29.95
The Best of Blondie tape has been cunningly put together by the video division of Chrysalis Records by stringing together a series of video demonstration tapes which, presumably, they just happened to have on hand at the time.
They have, nonetheless, gone to it with a vengeance, and produced a tape of impressive quality on both the technical and creative sides, the enjoyment of which really depends on whether you can site through an uninterrupted hour of Blondie music. I might venture to suggest that such a prospect is repetitive to the point of boredom, but I realise there is a danger of getting mobbed by hoardes of drooling fans if I do. After all, Chrysalis sold enough LP records which consisted of just that, so why not a video?
All Blondie hits of any consequence are on the tape and, however similar to one another they may sound, they certainly do not look the same. The creative 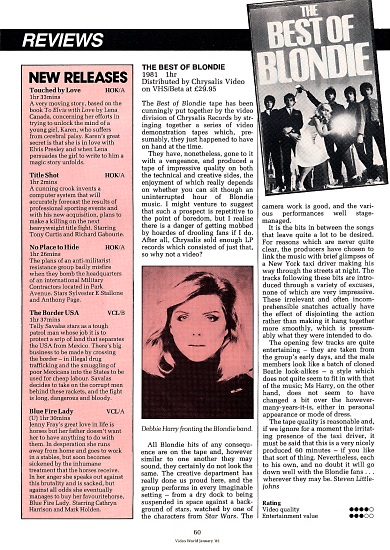 department has really done us proud here, and the group performs in every imaginable setting – from a dry dock to being suspended in space against a background of stars, watched by one of the characters from Star Wars. The camera work is good, and the various performances well stage-managed.
It is the bits in between the songs that leave quite a lot to be desired. For reasons which are never quite clear, the producers have chosen to link the music with brief glimpses of a New York taxi driver making his way through the streets at night. The tracks following these bits are introduced through a variety of excuses, none of which are very impressive. These irrelevant and often incomprehensible snatches actually have the effect of disjointing the action rather than making it hang together more smoothly, which is presumably what they were intended to do.
The opening few tracks are quite entertaining – they are taken from the group’s early days, and the male members look like a batch of cloned Beatle look-alikes – a style which does not quite seem to fit in with that of the music; Ms Harry, on the other hand, does not seem to have changed a bit over the however-many-years-it-is, either in personal appearance or mode of dress.
The tape quality is reasonable and, if we ignore for a moment the irritating presence of the taxi driver, it must be said that this is a very nicely produced 60 minutes – if you like that sort of thing. Nevertheless, each to his own, and no doubt it will go down well with the Blondie fans… wherever they may be.
Steven Littlejohns