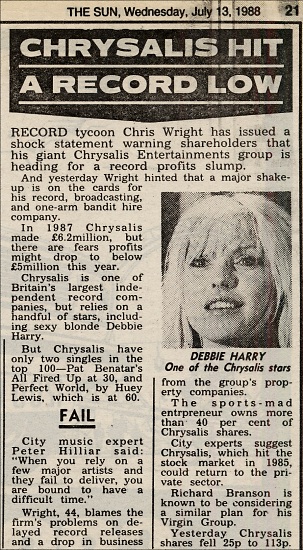 RECORD tycoon Chris Wright has issued a shock statement warning shareholders that his giant Chrysalis Entertainments group is heading for a record profits slump.
And yesterday Wright hinted that a major shake-up is on the cards for his record, broadcasting, and one-arm bandit hire company.
In 1987 Chrysalis made £6.2million, but there are fears profits might drop to below £5million this year.
Chrysalis is one of Britain’s largest independent record companies, but relies on a handful of stars, including sexy blonde Debbie Harry.
But Chrysalis have only two singles in the top 100 – Pat Benatar’s All Fired Up at 30, and Perfect World, by Huey Lewis, which is at 60.

FAIL
City music expert Peter Hilliar said: “When you rely on a few major artists and they fail to deliver, you are bound to have a difficult time.”
Wright, 44, blames the firm’s problems on delayed record releases and a drop in business from the group’s property companies.
The sports-mad entrepreneur owns more than 40 per cent of Chrysalis shares.
City experts suggest Chrysalis, which hit the stock market in 1985, could return to the private sector.
Richard Branson is known to be considering a similar plan for his Virgin Group.
Yesterday Chrysalis shares fell 25p to 113p.