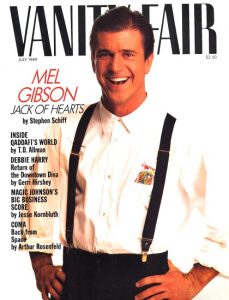 July 1989
Blondie – Back to Her Roots
Written by: Gerri Hirshey
Photographs by: Steven Meisel

“Some people are just born cool,” says designer Stephen Sprouse of Debbie Harry. In the late seventies she was Downtown’s queen of rock, who did it all before Madonna. Lately she’s been resurfacing in things like Hairspray and Wiseguy. Now she’s back with a new record. GERRI HIRSHEY reports.

Someone is laughing in the Museum of Modern Art. Here on a dank spring afternoon, a real New York Story has slipped into the crowd for a sentimental journey through the Andy Warhol retrospective. Who is this, giggling in the temple?

She has strolled past the silkscreened Liz Taylors and Troy Donahues, on beyond Elvis. There she is, a peach in black leather, gazing at a pair of late-seventies spattered canvases labeled “oxidation paintings.” The sign says MIX MEDIUMS, but in fact they are the “piss paintings” according to someone who says he watched Factory denizens take aim and splatter. He says the paintings are so, well… authentic… that Andy was obliged to stack them away in a far corner, reeking of true eau de Downtown. Andy’s Cosmic Last Giggle.
Our laughing pop icon moves on, when suddenly she’s ID’d.
“Oooooh, such a FACE.”
A goony Manhattan fashion victim, trussed and buckled into pricey SoHo rags, has gone rigid as a bird dog, urging her companion to look, look, fergodsakes at that face.
“It’s Debbie Har-ry. Blondie.”
“No shit. Where’s SHE been for the last hundred years?”
Deborah Harry does a neat pivot and glides past them, double-sealed against such recognition, the signature 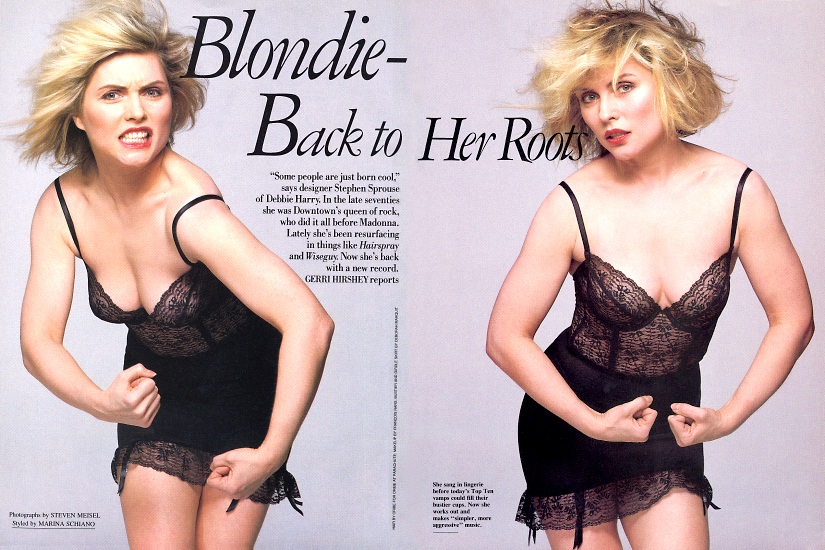 platinum hair tucked beneath a black jersey hood, over which she’s jammed a black leather cap. The body, small and slim again, is wrapped in a black leather coat over faded, too big jeans. Unobtrusive, down to the sensible tie shoes.
Nonetheless, people do stare at the face that became the flashy hood ornament for New Wave rock in the late seventies, the bottle blonde who stormed the stage at clubs like CBGB’s and tore off a tatty wedding dress to sing “Rip Her to Shreds” – nearly a decade before Madonna writhed through Venice like a video virgin in white. Harry was a Wrestlemaniac ere it was hip, a true Downtown demimondaine who shared her Bowery loft with feral cats and performed in a zebra-striped pillowcase her landlord plucked from the trash. She sang in lingerie before today’s Top Ten vamps could fill their bustier cups.
The Face is still quite beautiful, unretouched by lens filters or makeup. You could watch a movie across those cheekbones. They rise over wide, molded planes unmarked by four-plus decades, a fair amount of trouble, or what press agents call “character.”
“People seem to know me,” she says, “even when I’m not doing anything – like this last, um… low-profile bit. They know they know THAT FACE.” She laughs. “Whoever she is.”
Harry has turned a corner to find herself smack in front of “Marilyn Six-Pack.” Monroe in lavender. A mint Marilyn… lemon… one for all tastes. “Ah… Our Lady.”
As an adopted child in New Jersey, brunette Debbie Harry fantasized that her real mother was Marilyn Monroe. As a knowing adult on Manhattan’s Lower East Side, she mixed vintage sex-bomb peroxide with dark roots and New Wave wit and took it gold, then platinum on the record charts with her band Blondie.
I wanna be a platinum blonde, she sang at the outset, just like all the sexy stars | Marilyn and Jean, Jayne, Mae and Marlene | Yeah, they really had fun.
Yeah, yeah, and so did she, over 10 million records’ worth, with hit songs like “The Tide Is High,” “Rapture,” and “Heart of Glass.” Post-Monroe and pre-Madonna, she was a glam queen, Vogue pinup, punk poster girl. Few publications or college-dorm walls were immune to the lure of her look. She was Scavullo’d. Warhol’d. The Face was perfect Andy fodder, big, telegraphic, always camera-ready.
But now her friend Andy’s dead, nearly two years. The last Blondie tour was seven years ago, and then the band broke up. After her lover, Blondie guitarist Chris Stein, fell mysteriously ill in 1983 and she all but disappeared from the charts and the clubs, Harry became Manhattan’s most whispered-about rock M.I.A. since John Lennon dropped out to bake wheat bread.
“Where have I been?” Harry laughs, a deep, subdiaphragm huh-huhhhhhh. She is standing by a wall of plump shellacked Marilyn mouths, this woman Newsweek once called a “klutzy guttersnipe Garbo.”
“Just write, ‘She’s living alone. Somewhere below Forty-second Street.'”
The FACE that was 1980 has been flickering almost subliminally throughout this decade. In ads for Hush Puppies, Sara Lee, and Revlon. In supporting movie roles – married to Sonny Bono in John Waters’s film Hairspray, as a housewife in Union City. She got her best notices for her performance in David Cronenberg’s cult

“Some people like Debbie are just born cool, I guess.”
This from designer Stephen Sprouse, who added his Downtown professionalism to Harry’s Blondie look – in a very ad hoc way. Theirs is still the greatest of friendships, forged of mutual kindness and genetic cool. They were neighbors in the mid-seventies, sharing the kitchen and bath between their Bowery lofts. This was the Lower East Side before you could buy pink peppercorns on Avenue A, when loft ads read “toilet-fixture fee” instead of “marble Jacuzzi.”
“I met her in the kitchen,” Sprouse says. “Somewhere near the toaster oven.” He was painting, designing, a rock ‘n’ roll former art student who had worked with Halston and his Uptown ladies. He says he first saw Harry performing at CBGB’s, singing “Heat Wave” in a way that made Linda Ronstadt sound like a pruney temperance leader on her hit version. But they got to be friends because of the cats.
“There were backyards that made a courtyard, and all these alley cats were interbreeding,” says Harry. “Hundreds and hundreds. I don’t know if they ate rats or whatever, but they were tough, all scarred, one eye hanging out. One ear. We’d see these raging battles.”
Somehow, during the winter, one of them got trapped between the floor of Sprouse’s place and the ceiling of the loft below.
“I’d still be sleeping and I’d look up and there would be Debbie, feeding the cat.”
She pitched Tender Vittles into a hole beneath the floorboards near Sprouse’s ear. He thought it was touching – and practical.
“She didn’t want him to die. And rot there.”
Along with Chris Stein, they got to fooling around – with hair, makeup, junk clothes.
“Steve had some stuff because he had worked for Halston and he knew all these models and elegant women,” says Harry. “He’d been dressing them, and he had a few pieces left over from that. He liked the idea that we dressed sixties, which was basically out of necessity.”
Later, Sprouse would become a darling of the fashion press for his neat, eighties distillations of sixties style elements. Mick Jagger would ring him in a panic a few nights before Live Aid for a yellow jacket modeled on the old Stones getups.
“Steve had that clear perspective,” says Harry of those early years, “and it all came together.”
One memorable improvisation: a minidress whipped up as the band was about to leave for a British tour. “I got this thin, bodysuit-type thing,” Sprouse remembers. “I turned it upside down and cut out the crotch and made it into this one-shoulder dress.”
Harry hung razor blades from the hem, and rock ‘n’ roll badges. It became a poster shot, a punk book jacket, a tightly wrapped silhouette that echoed through the Alaia eighties.
By the time Blondie had three albums out, there was more money, and Sprouse was able to use the big silkscreens he made from video static and test patterns, transfer them to good fabrics, and wrap his famous friend in them – then charge the record company. During her quiet years, he gave her many pieces from his short-lived ready-to-wear collections – the Keith Haring graffiti’d Bible-page prints, the Day-Glo jackets. Following the collapse of his second ready-to-wear line and shop, his friend Debbie Harry has been supportive, gracing his gallery show (silk-screens of Iggy Pop on the cross), and just hanging out like old times. Sprouse says he is working on a book about the last ten years of rock and style, and of course she’ll have to be a part of it. Along with Andy Warhol, Debbie Harry, he figures, is the best curator/mannequin of his fashion work.
“Andy – or someone from the Factory – has the first two years of the stuff,” he says. “And Debbie has the rest.”

“Here’s the thing,” Harry is saying. “Some people are just better at selling.”
You can be light-years ahead of the curve, but some folks are born salesmen, and others just get these weird ideas.
“You know, I never put it together until just now. Not only my father but his father was in sales.”
Her grandfather sold shoes; her father worked in the garment center. Her father used to talk about his work a lot. When he showed up in Seventh Avenue showrooms, he never sold hard. “He was very casual about it,” Harry says. “He always said that if people want something they’re going to buy it.” In hindsight, she’s often said she’s glad she never had to come up with a hard-sell look. “I mean, if I had to start today, I don’t know what I’d do when someone told me I had to have an image.”
She says she’d still like to fool around, “take those terrible Arnel suits, those floral shirts with long pointy collars… drag all that shit out, but do it nicely.”
She’s still got her platform shoes – they’re coming back in a very demure way in Paris. Says Harry, “Nothing’s new before it’s old, real old.”
And therefore new again. Ask her for an overall impression of the workings of rock style and she doesn’t stop to cogitate.
“IT’S COMPOSTED!” she hollers, then laughs.
Things reconfigure and bubble back to the surface.
“COMPOST!”
On our way out of the Warhol retrospective, we pass a huge multiple silkscreen of Leanardo’s Mona Lisa. Harry jerks a thumb at it.
“Now, that’s the real Madonna.”
Out on the street, Harry is headed home. Downtown. There she is, arm up in the rush-hour traffic on Sixth Avenue, ahead of the curve and out on a limb. Calling to mind a new lyric that had blared out of the demo tape in her manager’s office a few hours earlier: Here comes the twenty-first century. | It’s gonna be much better for a girl like me.

Various Artists - Spirit Of The Forest