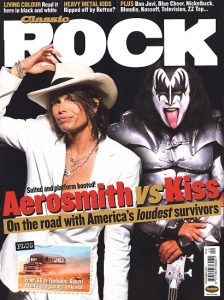 The former toasts of Union City return to the fray with a rag-bag of over-mannered, stylistic dead ends.

Blondie
‘The Curse Of Blondie
(Epic)
THE ‘CURSE OF BLONDIE’ – AFFECTIONATELY described by Debbie Harry as a running joke in the band – may be about to jump up and bite her on the bum. The ‘curse of Blondie’ may equally describe a band bereft of the sassy self-assurance with which the former punk rockers moved almost seamlessly from sparkling pop into slinky disco, and sold 40 million records along the way.
Today – commendably – Blondie want to move things a little further. But in their quest to fit in somewhere, or indeed anywhere, they sound awkward, muddled, almost desperate.
Lil’ Kim won’t be losing any sleep over ‘Shakedown’, an extraordinary combination of confrontational crap-rap and erotic suggestion, although it’s good to hear the Garden State of New Jersey immortalised in something other than a Bon Jovi documentary.
Swiftly driving away from da ‘hood, Blondie fancy a crack at proper rock music. But the loud guitars and huge drum sound of ‘Undone’ are too big for the summery, if slightly strange, pop melody that they are carrying; and the heavy, would-be metal of ‘Last One In The World’ quite absurdly overwhelms Harry’s hearty delivery and a 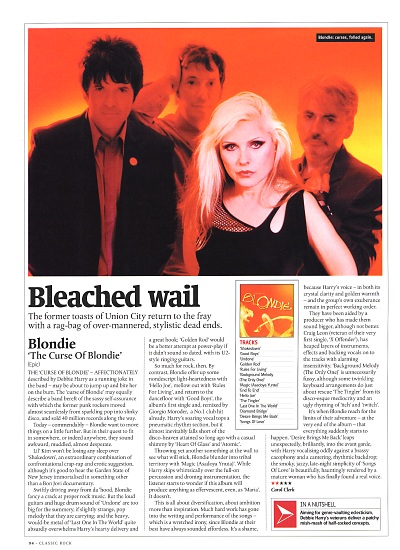 great hook; ‘Golden Rod’ would be a better attempt at power-play if it didn’t sound so dated, with its U2-style ringing guitars.
So much for rock, then. By contrast, Blondie offer up some nondescript light-heartedness with ‘Hello Joe’, mellow out with ‘Rules For Living’, and return to the dancefloor with ‘Good Boys’, the album’s first single and, remixed by Giorgio Moroder, a No.1 club hit already. Harry’s soaring vocal tops a pneumatic rhythm section, but it almost inevitably falls short of the disco-heaven attained so long ago with a casual shimmy by ‘Heart Of Glass’ and ‘Atomic’.
Throwing yet another something at the wall to see what will stick, Blondie blunder into tribal territory with ‘Magic (Asadoya Ynuta)’. While Harry skips whimsically over the full-on percussion and droning instrumentation, the listener starts to wonder if this album will produce anything as effervescent, even, as ‘Maria’. It doesn’t.
This is all about diversification, about ambition more than inspiration. Much hard work has gone into the writing and performance of the songs – which is a wretched irony, since Blondie at their best have always sounded effortless. It’s a shame, because Harry’s voice – in both its crystal clarity and golden warmth – and the group’s own exuberance remain in perfect working order.
They have been aided by a producer who has made them sound bigger, although not better. Craig Leon (veteran of their very first single, ‘X Offender’), has heaped layers of instruments, effects and backing vocals on to the tracks with alarming insensitivity. ‘Background Melody (The Only One)’ is unnecessarily fussy, although some twinkling keyboard arrangements do just about rescue ‘The Tingler’ from its disco-esque mediocrity and an ugly rhyming of ‘itch’ and ‘twitch’.
It’s when Blondie reach for the limits of their adventure – at the very end of the album – that everything suddenly starts to happen. ‘Desire Brings Me Back’ leaps unexpectedly, brilliantly, into the avant garde, with Harry vocalising oddly against a brassy cacophony and a cantering, rhythmic backdrop; the smoky, jazzy, late-night simplicity of ‘Songs Of Love’ is beautiful, hauntingly rendered by a mature woman who has finally found a real voice.