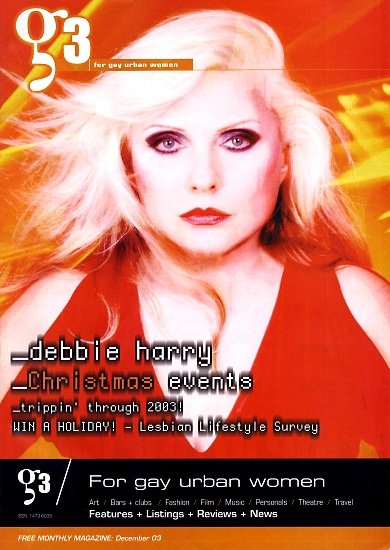 Free monthly magazine for gay urban women in the UK.

Debbie Harry from Blondie has become an icon with her 80’s classics including ‘Call Me’ and ‘Atomic’, but recently the rocker has made a come back with the success of her new album ‘The Curse of Blondie’. We catch up with her while she is busy covering the UK leg of her tour, to find out how the revival is going.

Why did it take so long to make the Album?
DH: “I think we started in late 2000 and then actually recorded in 2001. Basically we finished it right before 9/11 and then the album got sidetracked.”

How does this album differ from past Blondie records?
DH: “I think it’s more sophisticated. It’s about today. I don’t think that we’re trying to create a Blondie album that would just live on our reputation from the past. We try to make a record that was part of our thinking and lives today. I think that we’re probably all much more capable at what we do in all aspects, so the songs are better, the performances are better.”

What is it like to be a pop and culture icon?
DH: “Hmm, well, when I first realised that I had achieved icon-hood, I don’t know, I sort of had been laying low for a while, and I hadn’t been really active in performance for a while. All of a sudden it struck me that people were looking at me in a different way. I guess what I figured out is if you just last long enough and maintain some kind of decent appearance, you’re okay, you become an icon.”

How has Blondie stayed together so long?
DH: “We’ve been in business together for a long time. We were successful… we’re successful again. Plus, I think that each of us was motivated before we met, we all have individual motivation. It’s not like our motivation came from working together. So it’s a combination of having success and being individually motivated.” 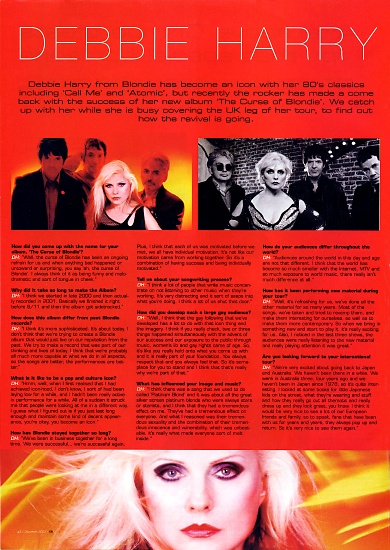 Tell us about your songwriting process?
DH: “I think a lot of people that write music concentrate on not listening to other music when they’re working. It’s very distracting and it sort of seeps into what you’re doing. I think a lot of us shut that door.”

How did you develop such a large gay audience?
DH: “well, I think that the gay following that we’ve developed has a lot to do with that icon thing and the imagery. I think if you really check, two or three things happened simultaneously with the advent of our success and our exposure to the public through music, women’s lib and gay rights came of age. So, it’s like you really hold onto what you come up with and it is really part of your foundation. You always respect that and you always feel that. So it’s someplace for you to stand and I think that that’s really why we’re part of that.”

What has influenced your image and music?
DH: “I think there was a song that we used to do called ‘Platinum Blond’ and it was about all the great silver screen platinum blonds who were always stars or starlets, and I think that they had a tremendous effect on me. They’ve had a tremendous effect on everyone. And what I reasoned was their tremendous sexuality and the combination of their tremendous innocence and vulnerability, which was unbeatable. It’s really what made everyone sort of melt inside.”

How do your audiences differ throughout the world?
DH: “Audiences around the world in this day and age are not that different. I think the world has become so much smaller with the internet, MTV and so much more exposure to world music, there really isn’t much difference at all.”

How has it been performing new material during your tour?
DH: “Well, it’s refreshing for us, we’ve done all the other material for so many years. Most of the songs, we’ve taken and tried to revamp them, and make them interesting for ourselves, as well as to make them more contemporary. So when we bring in something new and start to play it, it’s really exciting for us. Also, I noticed in the last three shows, the audiences were really listening to the new material and really playing attention it was great.”

Are you looking forward to your international tour?
DH: “We’re very excited about going back to Japan and Australia. We haven’t been there in a while. We were in Australia three, four years ago and we haven’t been in Japan since 1978, so it’s quite interesting. I looked at some books for little Japanese kids on the street, what they’re wearing and stuff and how they really go out all thematic and really dress up and they look great, you know. I think it would be very nice to see a lot of our European friends and family, so to speak, fans that have been with us for years and years, they always pop up and return. So it’s very nice to see them again.”