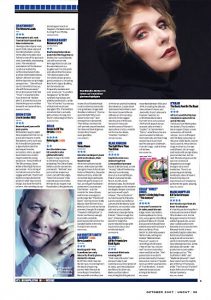 Deafening Deborah no match for Heritage Harry.
Debbie Harry and Blondie can still score on the Heritage Rock circuit, but the solo Deborah is a tougher sell. For this sixth solo album (the first since ’93’s Debravation), she recruited various groovy guest producers, including New York’s Super Buddha, but the results are frequently soulless and over-produced. “Love With Vengeance” is rife with synthetic handclaps and wobbly synthesisers, while “You’re Too Hot” is a morass of distorted vocals and mangled riffs. The best bits are where Harry actually gets a chance to sing, but there’s not enough of them.
ADAM SWEETING