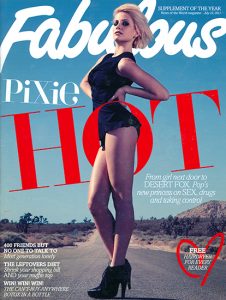 (News Of The World supplement magazine)

Blondie’s back and on tour this week. Here’s some stuff you might not know about Debbie Harry, the woman who made peroxide seriously cool

The band too its name from the catcalls of “Hey, Blondie!” that Debbie got from truck drivers. Lucky, because “Oi, your skirt’s tucked into your knickers” 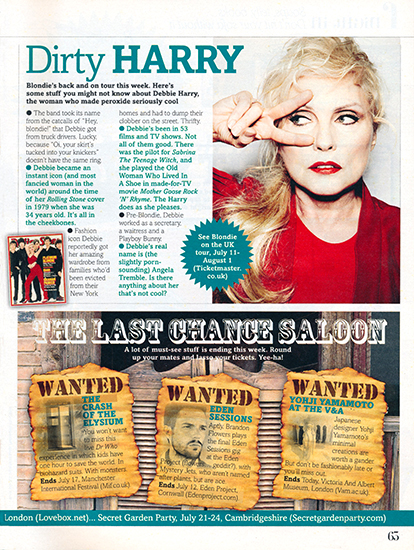 doesn’t have the same ring.

Debbie became an instant icon (and most fancied woman in the world) around the time of her Rolling Stone cover in 1979 when she was 34 years old. It’s all in the cheekbones.

Fashion icon Debbie reportedly got her amazing wardrobe from families who’d been evicted from their New York homes and had to dump their clobber on the street. Thrifty.

Debbie’s been in 53 films and TV shows. Not all of them good. There was the pilot for Sabrina The Teenage Witch, and she played the Old Woman Who Lived In A Shoe in made-for-TV movie Mother Goose Rock ‘N’ Rhyme. The Harry does as she pleases.

Pre-Blondie, Debbie worked as a secretary, a waitress and a Playboy Bunny.