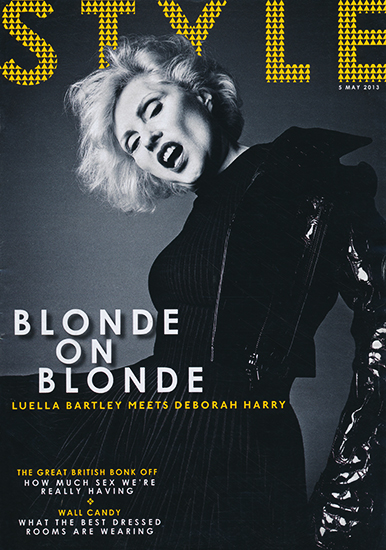 WHAT IS IT ABOUT DEBORAH HARRY – THE VOICE, HER ATTITUDE, THAT HAIR? EVERYTHING, SAYS LUELLA BARTLEY. SHE MEETS HER ICON IN THE FLESH

There is a simple reason why I love Deborah Harry, the reason why, when I’m nearly 40, she still makes me want to write her name in neon marker on stuff. As my good friend Katie so eloquently surmised, when I asked her what she thought: “Well, she’s just really cool, isn’t she?”
What I mean to say is: there are thousands of cogent reasons and convincing arguments for her cult status, starting with her band’s name, Blondie, continuing with lyrics such as “Oh, you know her, would you look at that hair” or “When I met you in the restaurant, you could tell I was no debutante” and song and album titles such as Pretty Baby and Rip Her to Shreds, and climaxing with outfits of sailor collars, sequined jersey T-shirts with bare legs and stilettos and that shameless peroxide hair. Add to that her natural attributes of crazy, china-doll-like cheekbones, a hypnotic mouth that blends Elvis’s scowl with Marilyn’s pout in excessive lip gloss, and an extraordinary voice that Rolling Stone magazine niftily termed “bombshell zombie”, and they all boil down to the same fundamental crux – attitude. The kind of attitude that gives you a surge in your own feminine prowess, the kind that manifests itself in bleached hair, pink graffiti and pillowcase dresses, kicking hard and looking at the world with an ironic smirk that doesn’t feel in any way superior.
Did that ideal stick to me? Like glue. And when my adolescent dream finally comes true and I get to meet her in New York, up close she still emanates the same essence of spaced-out, cool sassiness – and wearing a more grown-up version of the bleached hair, cute black dress, high-heel boots, smoky-eye combo she’s known for – that I always dreamt she would. At 67, like a few other contemporaries from the punk/new-wave scene, she’s still touring, still being creative, still writing and recording (there are tow new songs to hear – Winter and Drag You Around). She even still makes her own clothes, demonstrating that creative energy doesn’t have to have a shelf life. An inspiring thought, although it seems record companies are less open to this concept – there is no record deal for new material, “because we’re old”.
Highlighting the punk-meets-girl attitude that Harry created may seem an obvious statement these days, when Topshop sells the stuff in litre bottles, but before Harry, attitude and femininity in popular culture didn’t like each other very much. The girl groups of the 1960s sent the wretched message (albeit in a wonderful beribboned sound) that it was OK to sit by the phone for days, waiting, hoping, fearing, pleading that he would ring.
Cue Harry, first in her own version of a girl group, the Stilettos, already hinting at an aggressive punk irony, and then, once she had found her musical anti-Prince Charming, the guitarist Chris Stein (with whom she got together musically and personally; they split romantically in the 1980s), as the lead singer of Blondie.
Imagine this obnoxious, gorgeous, slightly dazed and unhinged woman singing/growling, “I’m in the phone booth, it’s the one across the hall. If you don’t answer, I’ll just ring it off the wall… Oh I can’t control myself…”, dealing with the same, age-old phone issue, and one couldn’t help but feel imbued with her sexual confidence. As Harry says: “That was one of the things that was really clear. I think I can take credit for having clarity about that. I was dead sick and tired of all of these songs by the R&B girls, the trios and stuff. They were all victimised by love. I 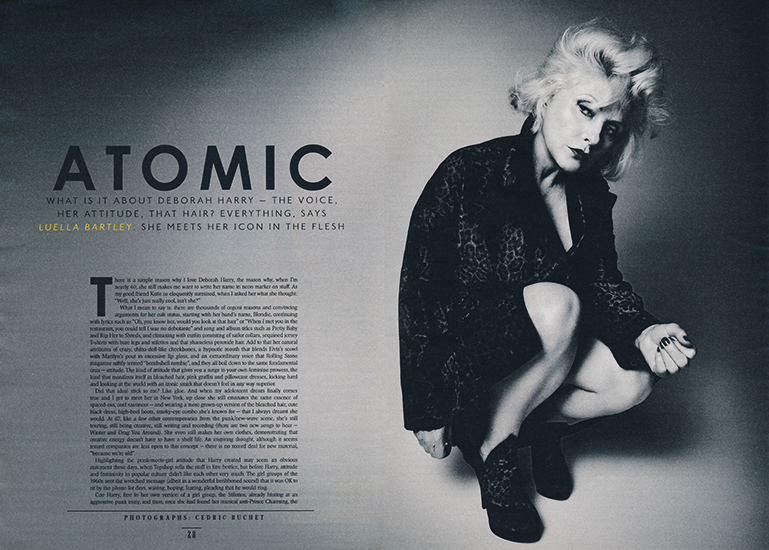 was sick of it. I didn’t want to portray myself or women as victims.”
In the same way that David Bowie was changing the way we looked at boys, sexuality, masculinity and personal expression in Britain, Harry provided a perverse light-bulb moment for girls, and she did it in a dirty club full of filthy machismo in the Bowery in New York.
Harry gave femininity an attitude and was unapologetic about her sexuality. It wasn’t highbrow or bookish, it was astute and witty and just a bit sardonic. More women would join her, the likes of Tina Weymouth, Cherry Vanilla and Laurie Anderson – “Oh, and Karen, the one who used to stick sweet potatoes up her butt. There were a lot of great characters and a lot of them are gone, sadly.” But Harry led the way with a bottle of bleach in hand and wearing a pillowcase that had been pulled out of a rubbish bin – a pillowcase that would inspire me to design a fashion collection nearly 30 years later.
“I don’t think I tried to be an important feminist, I didn’t have that kind of clarity, but I had a stubbornness and an independence and that came across. So that was good. I think that it was an idea that was bound to happen, I was just in the right place at the right time.”
The time was 1973 and the place was CBGB, where a load of achingly eager, sweaty, dishevelled boys in black (Ramones, Television), ankle deep in beer, were getting high on being outsiders, screaming amps and the stench coming from the infamous lavatories. And out of this now-fabled mire rose a mythical goddess.
“You couldn’t be a wallflower in that scene, you had to be a character. What was great about New York at the time was that it was a smaller downtown thing. The city wasn’t popular. New York was like a separate country – people always said that, New York was a separate world. It was this little island, and the federal government had just tossed us off politically, and so the economy sucked here. We were doing it because we had to do it, doing it to fulfil our dreams and obsessions and to be a part of the whole thing that was going on in New York. Everybody was paying attention to what was going on in London with all the Brit bands. I remember Malcolm [McLaren] came over in the early 1970s and he was working with the New York Dolls; at the time he and Vivienne [Westwood] were doing all that rubber. It was so fantastic. I remember one day Malcolm showed up at a friend’s house on 13th Street, and he had rented a station wagon and was selling rubber clothing out the back of it.”
At the time, did it feel like you were part of something that would become history? “I don’t think anyone in the business world was terribly interested at first, so we had a lot of freedom and we could be an ass if we wanted. We could be as catty to each other as we wanted, and we certainly were, and then all these independent managers and people from little labels started coming around and everybody became conscious, which changed the complexion.”
It does seem different now, much more calculated, and the internet means, sadly, that you don’t have to lock heads with like-minded people in inspiring, grubby clubs to get your music heard.
“I think the idea of physical contact and chemistry is important, that personal electricity – and not just this sort of big electricity – I mean the small charge on a personal level is important. A good shot of smelling somebody’s stinking sweat or their lovely perfume, there’s something extra to that. John Waters did that movie in Smell-O-Vision. That scratch-and-sniff thing, they ought to do something like that, so that you scratch and sniff your computer – that would be so funny.”
Blondie was to exceed both the parable of CBGB and the punk/new-wave scene, incorporating elements of various associations into their music, with an ever-perceptive eye on what was bubbling underneath them. “Chris has it musically and I have it spiritually or energy-wise. I do love the idea of cross-pollination, which was unheard of at the time.”
Harry sang songs that were visceral and bubble gum all at once. It may seem like a simple idea – to take Hollywood glamour and shamelessly soil it with rock’n’roll – but she effortlessly honed the perfect New York 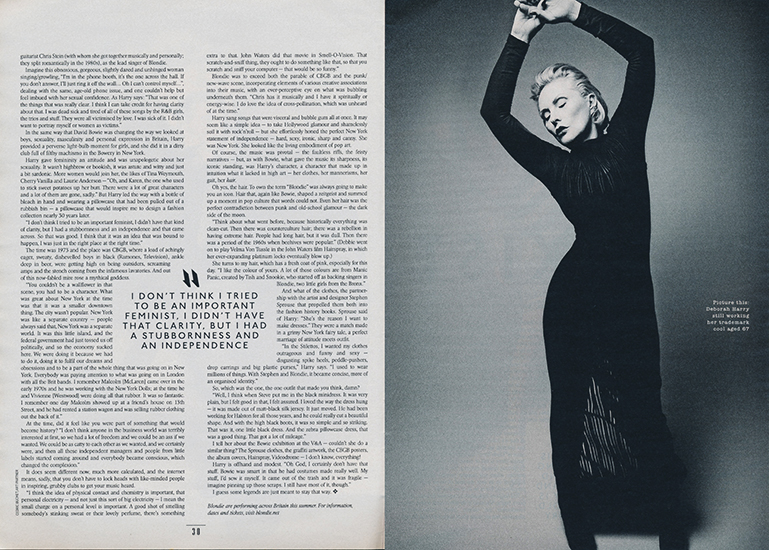 statement of independence – hard, sexy, ironic, sharp and canny. She was New York. She looked like the living embodiment of pop art.
Of course, the music was pivotal – the faultless riffs, the feisty narratives – but, as with Bowie, what gave the music its sharpness, its iconic standing, was Harry’s character, a character that made up in intuition what it lacked in high art – her clothes, her mannerisms, her gait, her hair.
Oh yes, the hair. To own the term “Blondie” was always going to make you an icon. Hair that, again like Bowie, shaped a zeitgeist and summed up a moment in pop culture that words could not. Even her hair was the perfect contradiction between punk and old-school glamour – the dark side of the moon.
“Think about what went before, because historically everything was clean-cut. Then there was counterculture hair; there was a rebellion in having extreme hair. People had long hair, but it was dull. Then there was a period in the 1960s when beehives were popular.” (Debbie went on to play Velma Von Tussle in the John Waters film Hairspray, in which her ever-expanding platinum locks eventually blow up.)
She turns to my hair, which has a fresh coat of pink, especially for this day. “I like the colour of yours. A lot of those colours are from Manic Panic, created by Tish and Snookie, who started off as backing singers in Blondie, two little girls from the Bronx.”
And what of the clothes, the partnership with the artist and designer Stephen Sprouse that propelled them both into the fashion history books. Sprouse said of Harry: “She’s the reason I want to make dresses.” They were a match made in a grimy New York fairy tale, a perfect marriage of attitude meets outfit.
“In the Stilettos, I wanted my clothes outrageous and funny and sexy – disgusting spike heels, peddle-pushers, drop earrings and big plastic purses,” Harry says. “I used to wear millions of things. With Stephen and Blondie, it became concise, more of an organised identity.”
So, which was the one, the one outfit that made you think, damn?
“Well, I think when Steve put me in the black minidress. It was very plain, but I felt good in that, I felt assured. I loved the way the dress hung – it was made out of matt-black silk jersey. It just moved. He had been working for Halston for all those years, and he could really cut a beautiful shape. And with the high black boots, it was so simple and so striking. That was it, one little black dress. And the zebra pillowcase dress, that was a good thing. That got a lot of mileage.”
I tell her about the Bowie exhibition at the V&A – couldn’t she do a similar thing? The spouse clothes, the graffiti artwork, the CBGB posters, the album covers, Hairspray, Videodrome – I don’t know, everything!
Harry is offhand and modest. “Oh God, I certainly don’t have that stuff. Bowie was smart in that he had costumes made really well. My stuff, I’d sew it myself. It came out of the trash and it was fragile – imagine pinning up those scraps. I still have most of it, though.”
I guess some legends are just meant to stay that way.

Blondie are performing across Britain this summer. For information, dates and tickets, visit blondie.net