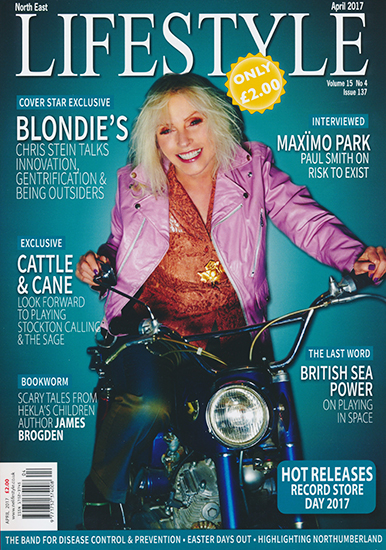 Your new album, Pollinator, is out in May. You seem to have picked up a bit of momentum again when it comes to recording and releasing.
Yeah, we should really almost be trying to do one a year in the future, it’s just the logistics of it are always difficult though, you know.

So the passion to do it is still there…
Yeah absolutely. I’m happy to keep going. As they say in the police department, “As soon as you retire, you’re dead in five years”.

The title, Pollinator, almost sounds like the title of a poem, perhaps by Rudyard Kipling…
Yes, definitely. [Laughing]

The image suggests spreading something around, spreading creativity perhaps.
That’s definitely what it is. We did do a lot of material from other people, so it’s about cross-referencing, but it’s also about the bees because we’re concerned about the bees, too. 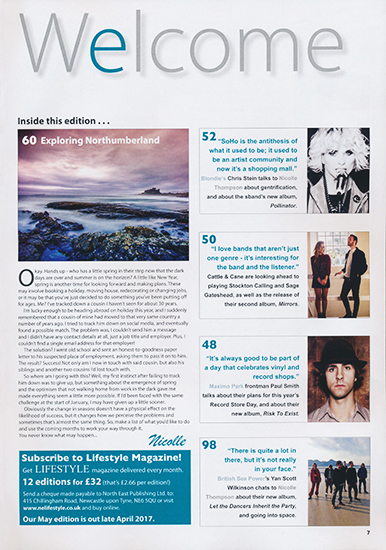 So it has as much a literal reference as it does a metaphorical one…
Yeah. Debbie just came out with it. We were on the phone discussing potential titles and she just said, “How about that.”

So, as with Ghosts of Download, there’s a story behind the title, it has nuances.
Yes. I’m glad you pick that up!

Things are still pretty tightly under wraps, we’ve only had a sneak preview of Fun, so what can you tell us about the rest of the album? Blondie are famous for their eclectic mix of styles.
I think there are four tracks that are kind of in-house from band members, then the rest of them are all things that have been donated from other people. We’ve never quite approached a record like this, with so much outside material, before.

So why did now seem like an exciting time to do that?
There’s a lot of people out there we admire and it just seemed like the right moment. Then we got this Johnny Marr song and I thought it was really great, and then we started reaching out to other people, they were enthusiastic about giving us stuff. It worked out well.

There are some amazing contributors on the album, and you mentioned they were people you admired. Did you approach people you thought would work well with you, or solely people you thought you would like to work with?
It’s an interesting point, but kind of both. It was people whose stuff we’d been enthusiastic about. We’re really big Sia fans, I think everybody is at this point, so it seemed like a no brainer. She had just done a song with Kate from the B-52s, so we suspected she’d be open to it.

Was there anybody you wanted to get that you couldn’t, due to timescales or whatever reason? Or anybody you’d still like to work with in the future?
I don’t know. We got these two tracks from Dev Hynes and the second track is not going to be on the record, but Nile Rodgers worked that up.

Yes, Magic isn’t it?
Yeah. So I don’t know where that’s going to wind up at this point, but it’s pretty cool.

Do you and Debbie still find it easy working together after all this time? You were a couple for such a long time, but that could cause problems or offer solutions. I guess it depends on the people.
For sure the latter. Things are easy an we just have a lot in common.

So you want the same things for the band…
Yeah. 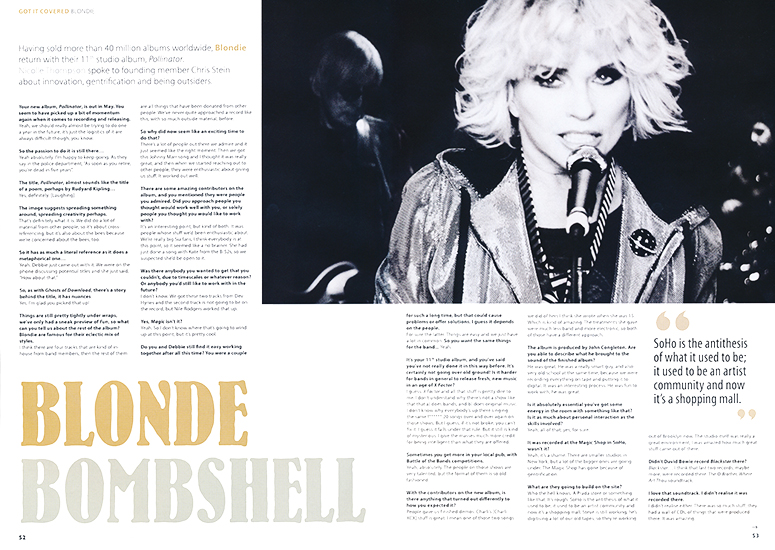 It’s your 11th studio album, and you’ve said you’ve not really done it in this way before. It’s certainly not going over old ground! Is it harder for bands in general to release fresh, new music in an age of X Factor?
I guess. X Factor and all that stuff is pretty dire to me. I don’t understand why there’s not a show like that that a) does bands, and b) does original music. I don’t know why everybody’s up there singing the same f****** 20 songs over and over again on those shows. But I guess, if it’s not broke, you can’t fix it. I guess it falls under that rule. But it still is kind of mysterious. I give the masses much more credit for being intelligent than what they are offered.

Sometimes you get more in your local pub, with Battle of the Bands competitions.
Yeah, absolutely. The people on those shows are very talented, but the format of them is so old fashioned.

With the contributions on the new album, is there anything that turned out differently to how you expected it?
People gave us finished demos. Charli’s [Charli XCX] stuff is great. I mean one of those two songs we did of hers I think she wrote when she was 15. Which is kind of amazing. The treatments she gave were much less band and more electronic, so both of those have a different approach.

The album is produced by John Congleton. Are you able to describe what he brought to the sound of the finished album?
He was great. He was a really smart guy, and also very old school at the same time, because we were recording everything on tape and putting it to digital. It was an interesting process. He was fun to work with, he was great.

Is it absolutely essential you’ve got some energy in the room with something like that? Is it as much about personal interaction as the skills involved?
Yeah, all of that, yes, for sure.

It was recorded at the Magic Shop in SoHo, wasn’t it?
Yeah, it’s a shame. There are smaller studios in New York, but a lot of the bigger ones are going under. The Magic Shop has gone because of gentrification.

What are they going to build on the site?
Who the hell knows. A Prada store or something like that. It’s rough. SoHo is the antithesis of what it used to be; 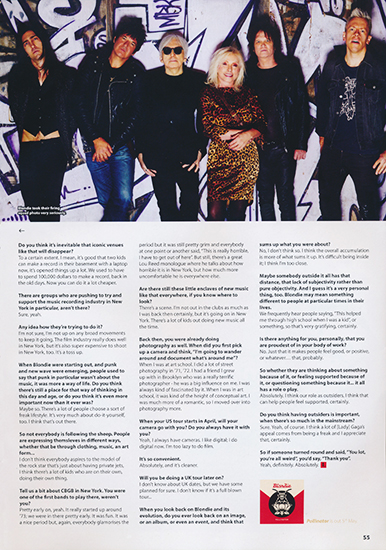 it used to be an artist community and now it’s a shopping mall. Steve is still working, he’s digitising a lot of our old tapes, so they’re working out of Brooklyn now. The studio itself was a really great environment, I was amazed how much great stuff came out of there.

Didn’t David Bowie record Blackstar there?
Blackstar… I think that last two records, maybe more, were recorded there. The O Brother, Where Art Thou soundtrack.

I love that soundtrack. I didn’t realise it was recorded there.
I didn’t realise either. There was so much stuff; they have a wall of CDs, of things that were produced there. It was amazing.

Do you think it’s inevitable that iconic venues like that will disappear?
To a certain extent. I mean, it’s good that two kids can make a record in their basement with a laptop now, it’s opened things up a lot. We used to have to spend 100,000 dollars to make a record, back in the old days. Now you can do it a lot cheaper.

There are groups who are pushing to try and support the music recording industry in New York in particular, aren’t there?
Sure, yeah.

Any idea how they’re trying to do it?
I’m not sure, I’m not up on any broad movements to keep it going. The film industry does well in New York, but it’s also super expensive to shoot in New York, too. It’s a toss up.

When Blondie were starting out, and punk and new wave were emerging, people used to say that punk in particular wasn’t about the music, it was more a way of life. Do you think there’s still a place for that way of thinking in this day and age, or do you think it’s even more important now than it ever was?
Maybe so. There’s a lot of people choose a sort of freak lifestyle. It’s very much about do-it-yourself, too. I think that’s out there.

So not everybody is following the sheep. People are expressing themselves in different ways, whether that be through clothing, music, an art form…
I don’t think everybody aspires to the model of the rock star that’s just about having private jets, I think there’s a lot of kids who are on their own, doing their own thing.

Tell us a bit about CBGB in New York. You were one of the first bands to play there, weren’t you?
Pretty early on, yeah. It really started up around ’73; we were in there pretty early. It was fun. It was a nice period but, again, everybody glamorises the period but it was still pretty grim and everybody at one point or another said, “This is really horrible, I have to get out of here”. But still, there’s a great Lou Reed monologue where he talks about how horrible it is in New York, but how much more uncomfortable he is everywhere else.

Are there still these enclaves of new music like that everywhere, if you know where to look?
There’s a scene. I’m not out in the clubs as much as I was back then certainly, but it’s going on in New York. There’s a lot of kids out doing new music all the time.

Back then, you were already doing photography as well. When did you first pick up a camera and think, “I’m going to wander around and document what’s around me”?
When I was at art school. I did a lot of street photography in ’71, ’72. I had a friend I grew up with in Brooklyn who was a really terrific photographer – he was a big influence on me. I was always kind of fascinated by it. When I was in art school, it was kind of the height of conceptual art. I was much more of a romantic, so I moved over into photography more.

When your US tour starts in April, will your camera go with you? Do you always have it with you?
Yeah, I always have cameras. I like digital; I do digital now. I’m too lazy to do film.

Will you be doing a UK tour later on?
I don’t know about UK dates, but we have some planned for sure. I don’t know if it’s a full blown tour…

When you look back on Blondie and its evolution, do you ever look back on an image or an album, or even an event, and think that sums up what you were about?
No, I don’t think so. I think the overall accumulation is more of what sums it up. It’s difficult being inside it; I think I’m too close.

Maybe somebody outside it all had that distance, that lack of subjectivity rather than pure objectivity. And I guess it’s a very personal thing, too. Blondie may mean something different to people at particular times in their lives.
We frequently hear people saying, “This helped me through high school when I was a kid”, or something, so that’s very gratifying, certainly.

Is there anything for you, personally, that you are proudest of in your body of work?
No. Just that it makes people feel good, or positive, or whatever… that, probably.

Do you think having outsiders is important, when there’s so much in the mainstream?
Sure. Yeah, of course. I think a lot of [Lady] Gaga’s appeal comes from being a freak and I appreciate that, certainly.

So if someone turned around and said, “You lot, you’re all weird”, you’d say, “Thank you”.
Yeah, definitely. Absolutely.

Pollinator is out 5th May