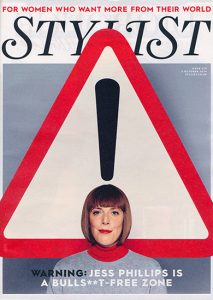 “We must have hope, right?”

“Do my teeth look green?” asks Debbie Harry, leaning forward and prodding a finger towards her mouth. “I just used mouthwash and I’m sure it made my teeth green!”
Harry’s teeth (definitely not green) are just one aspect of her mythologised face: those razor cheekbones, heart-shaped mouth, enormous sapphire eyes. Today, it’s long been surgically lifted, a maintenance procedure she likens to “having a flu shot” and necessary, she’s always felt, for “showbiz” life. The decades of fixation on Harry’s looks, as a singer-songwriter with New York’s post-punk/new wave pioneers Blondie, is just one reason her first memoir is called Face It.
Notoriously private, she’s also facing herself, finally veering “closer to the bone”, documenting her lifetime’s misadventures through both characteristically cool eyes and uncharacteristic vulnerability (she was interviewed for her new book by veteran rock writer Sylvie Simmons). Harry’s once formidable reputation as a prickly, aloof, hardboiled character is nowhere in sight when we meet in an opulent suite in London’s Savoy Hotel. Instead she’s a warm, mischievous and thoughtful presence dressed in a shiny black top, matching trousers and chunky Comme De Garcons trainers. “I’m a contrarian, and naturally private, but I’m also pretty light-hearted,” she smiles, her once-peroxide hair now flowing naturally white.
She was 33 when Blondie’s third album, Parallel Lines, became a global breakthrough in 1978, their pioneering songs blending pop, rock, disco and hip-hop through a stunning iconic parade of singles: Heart Of Glass, Call Me, Atomic, Rapture… She was no less a style icon, all leather jackets, slip dresses and distressed denim 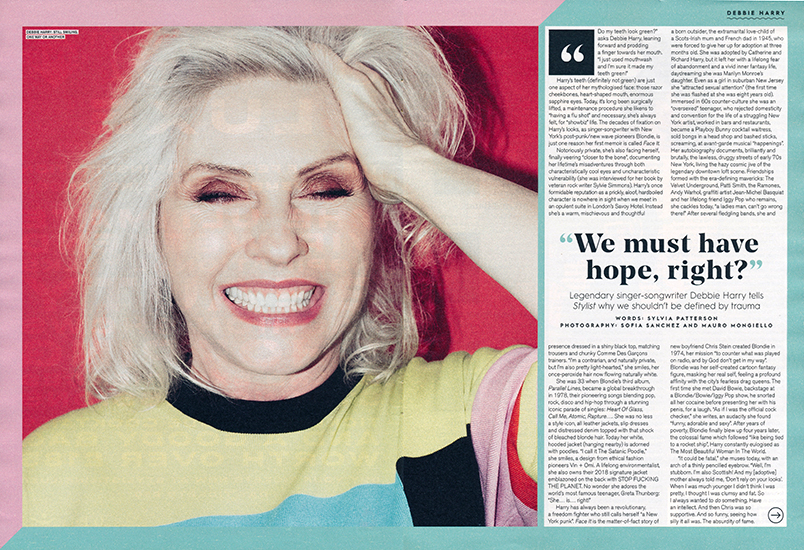 topped with that shock of bleached blonde hair. Today her white, hooded jacket (hanging nearby) is adorned with poodles. “I call it The Satanic Poodle,” she smiles, a design from ethical fashion pioneers Vin + Omi. A lifelong environmentalist, she also owns their 2018 signature jacket emblazoned on the back with STOP FUCKING THE PLANET. No wonder she adores the world’s most famous teenager, Greta Thunberg: “She… is… right!”
Harry has always been a revolutionary, a freedom fighter who still calls herself “a New York punk”. Face It is the matter-of-fact story of a born outsider, the extramarital love-child of a Scots-Irish mum and French dad in 1945, who were forced to give her up for adoption at three months old. She was adopted by Catherine and Richard Harry, but it left her with a lifelong fear of abandonment and a vivid inner fantasy life, daydreaming she was Marilyn Monroe’s daughter. Even as a girl in suburban New Jersey she “attracted sexual attention” (the first time she was flashed at she was eight years old). Immersed in ’60s counter-culture she was an “oversexed” teenager, who rejected domesticity and convention for the life of a struggling New York artist, worked in bars and restaurants, became a Playboy Bunny cocktail waitress, sold bongs in a head shop and bashed sticks, screaming, at avant-garde musical “happenings”. Her autobiography documents, brilliantly and brutally, the lawless, druggy streets of early 70s New York, living the hazy cosmic jive of the legendary downtown loft scene. Friendships formed with the era-defining mavericks: The Velvet Underground, Patti Smith, the Ramones, Andy Warhol, graffiti artist Jean-Michel Basquiat and her lifelong friend Iggy Pop who remains, she cackles today, “a ladies man, can’t go wrong there!” After several fledgling bands, she and new boyfriend Chris Stein created Blondie in 1974, her mission “to counter what was played on radio, and by God don’t get in my way”. Blondie was her self-created cartoon fantasy figure, masking her real self, feeling a profound affinity with the city’s fearless drag queens. The first time she met David Bowie, backstage at a Blondie/Bowie/Iggy Pop show, he snorted all her cocaine before presenting her with his penis, for a laugh. “As if I was the official cock checker,” she writes, an audacity she found “funny, adorable and sexy”. After years of poverty, Blondie finally blew up four years later, the colossal fame which followed “like being tied to a rocket ship”, Harry constantly eulogised as The Most Beautiful Woman In The World.
“It could be fatal,” she muses today, with an arch of a thinly pencilled eyebrow. “Well, I’m stubborn. I’m also Scottish! And my [adoptive] mother always told me, ‘Don’t rely on your looks’. When I was much younger I didn’t think I was pretty, I thought I was clumsy and fat. So I always wanted to do something. Have an intellect. And then Chris was so supportive. And so funny, seeing how silly it all was. The absurdity of fame. I’d sit back and think, ‘Jeez, you’re just an asshole like everybody else. How did you get so lucky?'” 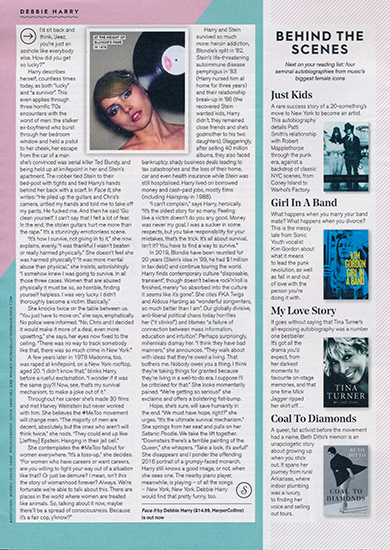 Harry describes herself, countless times today, as both “lucky” and “a survivor”. This even applies through three horrific ’70s encounters with the worst men: the stalker ex-boyfriend who burst through her bedroom window and held a pistol to her cheek, her escape from the car of a man she’s convinced was serial killer Ted Bundy, and being held up at knifepoint in her and Stein’s apartment. The robber tied Stein to their bed-post with tights and tied Harry’s hands behind her back with a scarf. In Face It, she writes: “He piled up the guitars and Chris’s camera, untied my hands and told me to take off my pants. He fucked me. And then he said ‘Go clean yourself’. I can’t say that I felt a lot of fear. In the end, the stolen guitars hurt me more than the rape.” It’s a stunningly emotionless scene.
“It’s how I survive, not giving in to it,” she now explains, evenly. “I was thankful I wasn’t beaten or really harmed physically.” She doesn’t feel she was harmed physically? “It was more mental abuse than physical,” she insists, astonishingly. “I somehow knew I was going to survive. In all those three cases. Women that are abused physically it must be so, so horrible, finding yourself helpless. I was very lucky. I didn’t thoroughly become a victim. Basically.”
She knocks twice in the table between us. “You just have to move in,” she says, emphatically. No police were informed. “No, Chris and I decided it would make it more of a deal, even more upsetting,” she says, her eyes now fixed to the ceiling. “There was no way to track somebody like that, there was so much crime in New York.”
A few years later in 1978 Madonna, too, was raped at knifepoint, on a New York rooftop, aged 20. “I didn’t know that,” blinks Harry, before a rueful exclamation. “I wonder if it was the same guy?! Now, see, that’s my survival mechanism, to make a joke out of it.”
Throughout her career she’s made 30 films and met Harvey Weinstein but never worked with him. She believes the #MeToo movement will change men. “The majority of men are decent, absolutely, but the ones who aren’t will think twice,” she nods. “They could end up like [Jeffrey] Epstein. Hanging in their jail cell.”
She contemplates the #MeToo fallout for women everywhere. “It’s a toss-up,” she decides. “For women who have careers or want careers, are you willing to fight your way out of a situation like that? Or just be demure? I mean, isn’t this the story of womanhood forever? Always. We’re fortunate we’re able to talk about this. There are places in the world where women are treated like animals. So, talking about it now, maybe there’ll be a spread of consciousness. Because it’s a fair cop, y’know?”
Harry and Stein survived so much more: heroin addiction, Blondie’s split in ’82, Stein’s life-threatening autoimmune disease pemphigus in ’83 (Harry nursed him at home for three years) and their relationship break-up in ’86 (the recovered Stein wanted kids, Harry didn’t, they remained close friends and she’s godmother to his two daughters). Staggeringly, after selling 40 million albums, they also faced bankruptcy, shady business deals leading to tax catastrophes and the loss of their home, car and even health insurance while Stein was still hospitalised. Harry lived on borrowed money and cash-paid jobs, mostly films (including Hairspray in 1988).
“I can’t complain,” says Harry, heroically. “It’s the oldest story for so many. Feeling like a victim doesn’t do you any good. Money was never my goal. I was a sucker in some respects, but you take responsibility for your mistakes, that’s the trick. It’s all about survival, isn’t it? You have to find a way to survive.”
in 2019, Blondie have been reunited for 20 years (Stein’s idea in ’99, he had $1 million in tax debt) and continue touring the world. Harry finds contemporary culture “disposable, transient”, thought doesn’t believe rock’n’roll is finished, merely “so absorbed into the culture it seems like it’s gone”. She cites FKA Twigs and Aldous Harding as “wonderful songwriters, so much better than I am”. Our globally diverse, anti-liberal political chaos today horrifies her (“it stinks!”) and blames “a failure of connection between mass information, education and intuition”. Perhaps surprisingly, millennials dismay her. “I think they have bad manners,” she announces. “They walk about with ideas that they’re owed a living. That bothers me. Nobody owes you a thing. I think they’re taking things for granted because they’re living in a well-to-do era. I suppose I’ll be criticised for that.” She looks momentarily pained. “We’re getting so serious!” she exclaims and offers a bolstering fist-bump.
Hope, she’s sure, will save humanity in the end. “We must have hope, right?” she urges. “It’s the ultimate survival mechanism.” She springs from her seat and pulls on her Satanic Poodle. We take the lift together. “Downstairs there’s a terrible painting of the Queen,” she whispers. “Take a look, it’s awful!” She disappears and I ponder the offending 2016 portraits of a grumpy-faced monarch. Harry still knows a good image, or not, when she sees one. The nearby piano player, meanwhile, is playing – of all the songs – New York, New York. Debbie Harry would find that pretty funny, too.

Debbie Harry talks about her extraordinary new memoir ‘Face It’